Comic book artist Frank Cho has released another one of his infamous sketch covers. Cho’s sketch covers typically mock trending comic book culture topics and this one doesn’t disappoint. He’s even come under attack for the way he draws women in comics. A couple of years ago Cho produced a variant cover for UDON for their upcoming Street Fighter comic Cammy. The variant put Cammy in the same pose Italian artist artist Milo Manara did with the controversial Spider-Woman cover.

This cover features Black Panther, Blade, and Storm. Cho isn’t afraid to take pot shots at Black Panther’s marriage to Storm. He also fires shots across the bow at Marvel Studios and their marketing campaign for Black Panther which incidentally seems to have forgot Wesley Snipes’ Blade trilogy which dominated box offices when it was released and is still beloved by many fans.

Frank included the following with the covers release:

It’s funny how the Blade movie is pretty much all but forgotten by the Marvel Studios.

Anyway, see you guys at the Planet Comicon in Kansas City. 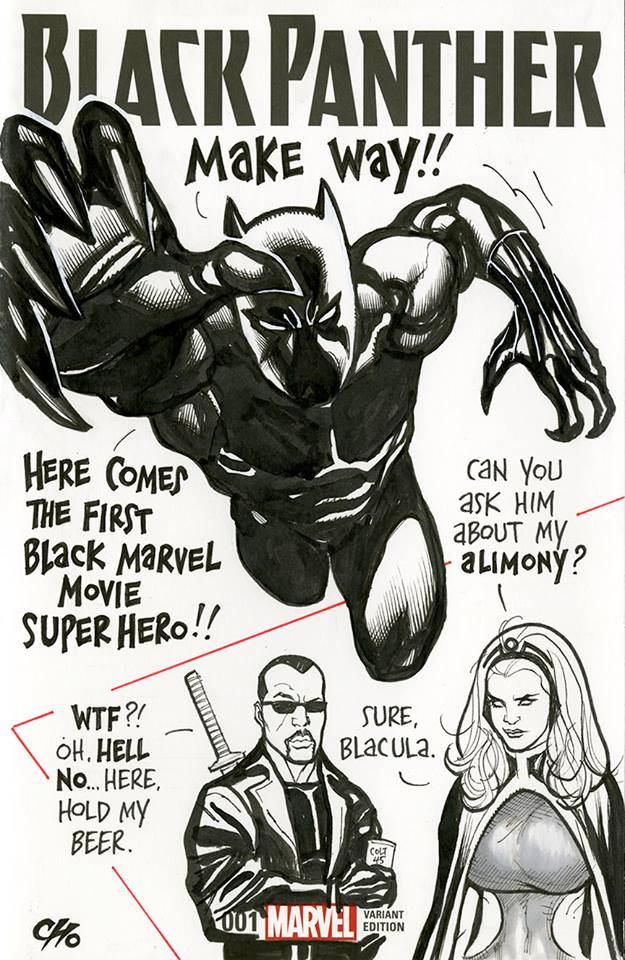 As you can tell Cho doesn’t hold anything back. Black Panther shouts, “Make Way!! Here comes the first Black Marvel movie super hero!!” Blade holding a Colt 45 in his hand is in complete shock, “WTF?! Oh, Hell no.. Here, hold my beer.”

Even Storm gets in on the humor as she responds to Blade, “Sure Blacula.” She also asks Blade for help, “Can you ask him about my alimony?”

A number of Cho’s fans loved the cover.

What do you think about Frank Cho’s Black Panther cover? Did you laugh at the humor or do you think it’s a little too over the top and offensive?