Frank Cho is churning out covers left and right. He just recently rolled out two absolutely hilarious sketch covers. The first takes a bunch of cheeky pokes about the absolute insane media craze surrounding the recently released Black Panther film. The second makes some jabs at Marvel Comics and how they’ve handled Spider-Man as well as how some of their editorial staff has treated fans and customers.

But his latest cover is the official Harley Quinn #40 variant cover. It’s been completely inked, but the full colored image is still not available yet. But you’ll get a laugh out of this.

Cho’s imagination is just fantastic. He uses the classic carrot and stick metaphor and turns it on its head. But that’s not the only thing he turns on its head. He also completely turns Scarecrow’s own fear tactics against him. Cho uses Harley Quinn and Poison Ivy to create one of his best Harley Quinn variant covers to date. Harley Quinn casts out a fishing line using a bat as bait to give Scarecrow quite a fright!

I finished and inked the Harley Quinn cover before I left for Kansas City. I just got the final colors by my colorist, Sabine Rich, today, and it looks fantastic.

I’ll post the final colored image later when the book comes out next month. 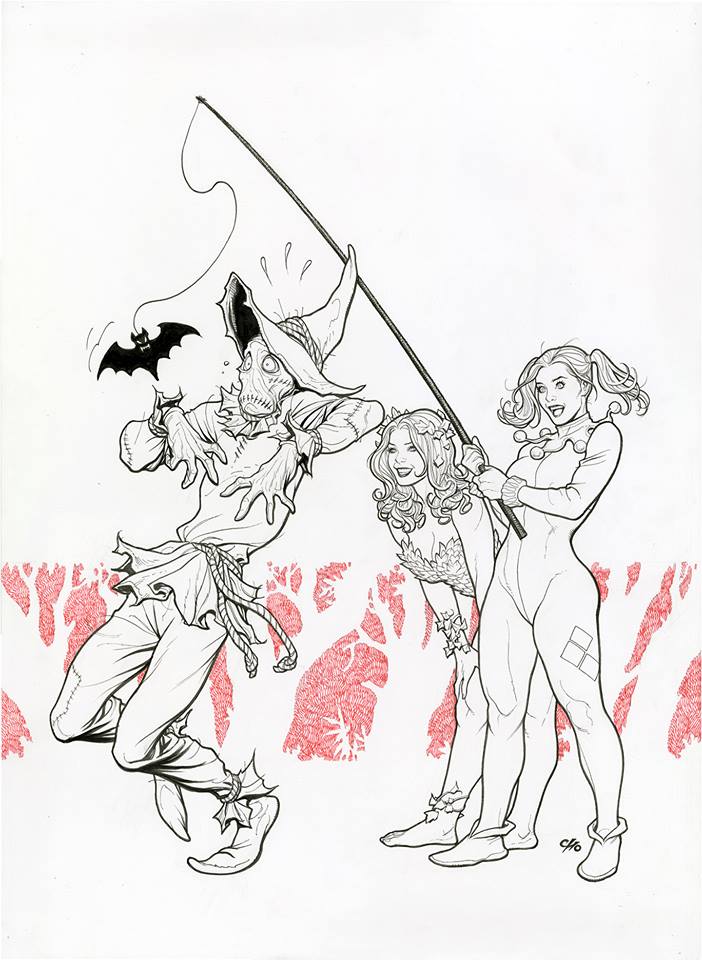 I just love the simplicity of the scenario. It’s just two girls going fishing! But the way Cho shows the emotions of all three characters is what makes this cover stand out to me. Scarecrow’s entire body appears to be convulsing as he leaps in fear of the Big Black Bat. But while Scarecrow is scared out of his mind, Harley Quinn looks like she is actually wrangling in her catch and enjoying it too boot! Finally, Poison Ivy looks on in sheer fun.

I’ll definitely be picking up this variant cover when Harley Quinn #40 comes out next month!

Harley Quinn #40 is written by Frank Tieri with art by Mirka Andolfo. Here’s the official solicitation:

“Angry Bird” part four! After the death of Mason Macabre, Harley refuses to put any more of her friends in harm’s way…but what happens when they just won’t stay out of it? Does Harley’s vow to keep them safe extend to getting herself killed? Or will she accept a little help from her friends?