Batman: White Knight creator Sean Gordon Murphy issued a call for a comics cease fire. He asked people in the comic book world to “unblock everyone in exchange for zero negativity for 30 days.” He added, “And we all promise to be on our best behavior. See how we like it.”

I think we need to call a #comicsceasefire for a month. Everyone unblock everyone in exchange for zero negativity for 30 days. And we all promise to be on our best behavior. See how we like it. https://t.co/uNjL3mXRYR

He didn’t stop at just calling for a cease fire. He also explained his own “no block” policy. For those that haven’t been following the Twitter battles in the comic book industry, many creators and editors have begun block chaining people. Basically, they block everyone who follows someone else. This is mostly done to followers of Diversity & Comics and people involved in #Comicsgate, who are outspoken critics of the current state of comics. They’ve even created a boycott list of the people they feel are toxic to the industry.

I've gotten heat from people because I have a "no block" policy. So let me explain this policy and why it works for me. But first, a disclaimer:

You have the right to run your Twitter however you want. If you're being threatened and worried for your safety, then block away. 99% of my comic friends block people for whatever reasons, and I respect that choice.

Murphy eloquently explains that he is running a business and he understands that when you run a business you have to deal with customer service.

But I'm trying a NO BLOCK policy, and I love it. I don't care if you threaten me, troll me, or throw shade at White Knight–I run a business, and part of that is dealing with customer service. By all means, be a dick–I'll just "high road" you.

He even has solution for dealing with potential unruly customers.

HIGH ROADING is what I do with some trolls–I'll "quote" them so everyone can see my response, and I'll be 100% nice by displaying perfect customer service.

"Sorry you didn't like the book, I appreciate you giving it a chance," usually calms them down. And if it doesn't, at least you're displaying your professionalism to EVERYONE. Showing them that you're willing to listen to customers, even when they're rude.

Stand up for your values and condemn who you want, but I feel like blocking is polarizing/divisive. Most importantly, it's not fixing the problem. A capitalist would say that not only are you losing that costumer, but 10 of their friends when they start complaining about you.

And for me, the CAPITALIST view is worth remembering–as deaf as it might seem to your struggles and values. Is comics only about money? No, but without money we lose it all. And then you'll have NO platform. 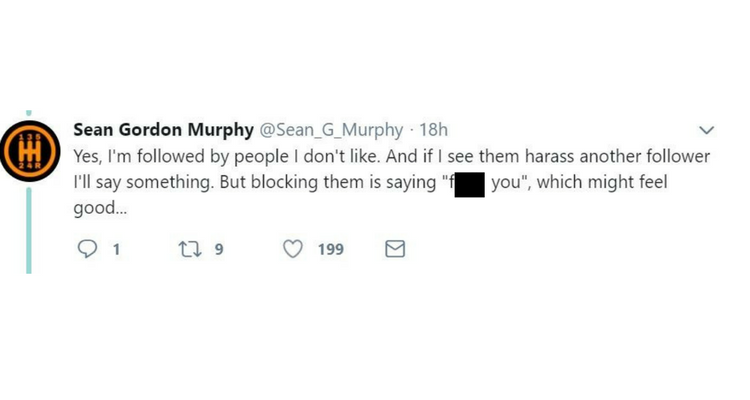 …but I prefer to try and WIN THEM OVER with my work–show them something that reflects my inclusive values and hope it wins them over that way.

And while they can't publicly say so, publishers and stores agree. Because you're not only blocking YOUR customers, you're blocking THEIRS.

Most people seemed to agree with Murphy’s “No Block” policy.

I’m down with this thread….. pic.twitter.com/gu5bPTR9HR

You're catching heat for your no block policy? What!?!?! Dude, I'm over here like, "I need to be more like SGM… That dude is a class act!"

You have articulated this so perfectly. I could not agree with you more and appreciate you stating it.

Great thread. Thanks for being a positive representative in the community. Keep up the stellar work on White Knight!

This thread is amazing

Total common sense approach. Was expecting you to be crucified for saying this. Pleasantly surprised reading the comments. Honestly this approach is FAR more X-Men than that other thing that keeps being associated with the X-Men.

At one point, I never blocked anyone either, until I got on their radar. I find your characterization of dealing with this as customer service to be offensive. If someone had legitimate, reasoned criticisms for me and my work, that's fine. That's not what they do.

Others disagreed with the whole idea of the Comics Cease Fire.

I appreciate what you're going for here, but considering what some have had thrown at them here I think it's unfair to suggest they unblock anybody. Even under ostensibly peaceful circumstances.

Some simply called the suggestion “naive” and “childish.”

I think this is profoundly naive.

Your child-like innocence makes me wish for a better world.@justsomeguycc @No1MarmadukeFan

The comic book industry at the moment has really become a battleground in a much larger culture war. Many comic book creators have gotten away from the idea of escapism and adventure and simply making good comics. Instead many are focused on turning comics into pure propaganda by pushing radical agendas into their stories. But not only are they focused on turning the industry into a propaganda outlet, they are also trying to force creators who disagree with their political beliefs out of the business. We saw conservative comic book creator Will Caligan lose his job. CBR journalist Kieran Shiach has made it his mission to get “moderate Republican” Ethan Van Sciver fired from DC Comics. More recently, he’s even targeting Howard Chaykin. Bane co-creator Chuck Dixon is even on an alleged black list at Marvel Comics. This type of behavior is absolutely unacceptable. People should not be trying to ruin others careers over a disagreement in political beliefs. A ceasefire could really help and bring some sanity back to the comic book industry.

Do you think a ceasefire would work or would only one side participate? I’m leaning that a ceasefire wouldn’t really accomplish much. It’s a great idea, but I don’t see people like Kieran Shiach stopping his aggressive pursuits to get comic book creators fired from DC Comics and Marvel Comics.