**Warning Spoilers for Thanos #16 Below**

Thanos #16 by Donny Cates and Geoff Shaw predominantly tells the story of the Cosmic Ghost Rider’s origin. It was previously revealed Frank Castle was the Cosmic Ghost Rider and that he had previously made a deal to become the Ghost Rider, but also gained the Power Cosmic from Galactus. The beginning of this issue fleshes that story out and provides more details on his interactions with Mephisto, Galactus, and finally Thanos.

In fact, he has become the Black Right Hand of The Mad King Thanos. And Thanos uses his tools to effective measure as he promises Frank Castle a universe of punishment or in Thanos’ own words, “I will show you more evil than you can punish in a thousand lifetimes.”

But Thanos has other purposes for the Cosmic Ghost Rider. He uses him as a weapon in his final fight against one of the last surviving beings of the Marvel Universe. That being is Norrin Radd, the once Silver Surfer. It appears Norrin Radd, no longer holds the title of Silver Surfer, but is now referred to as the Fallen One. And he’s been biding his time in the Marvel Universe waiting for the right time to strike against Thanos. But more importantly he was waiting to become worthy. That’s right Norrin Radd, the once Silver Surfer and now The Fallen One, wields Thor’s mighty hammer, Mjolnir. 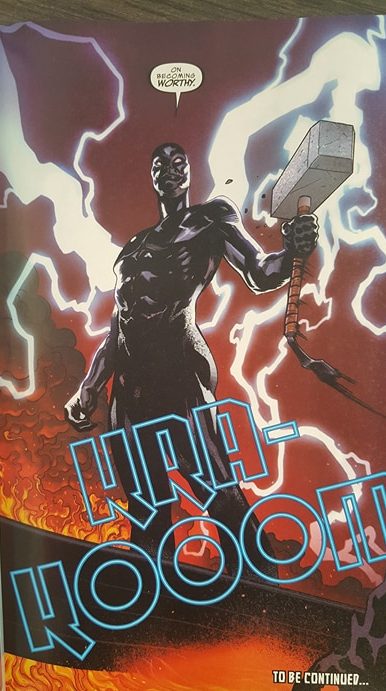