Proxima Midnight is sent to New York after she requests to aid the Ebony Maw in subduing the city. She promises to drop capsule’s on the city and crush Earth’s resistance, kill their last champions, and eat their hearts. Thanos approves and Proxima Midnight jumps from Thanos’ ship and crash lands in New York City where she faces Luke Cage, Spectrum, Superior Spider-Man, and the Splenderous Spider Hero. 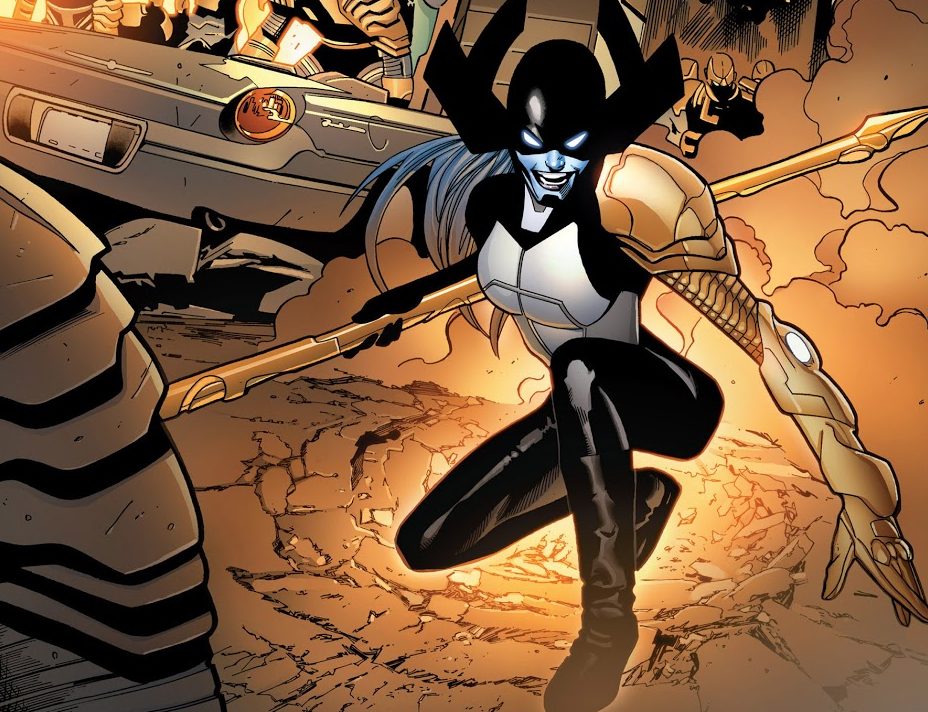 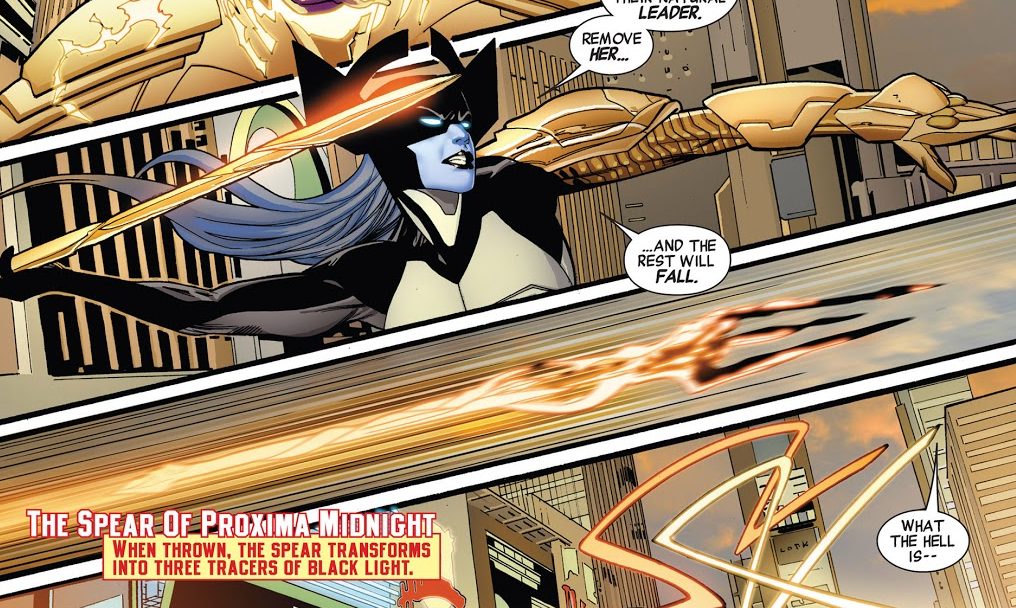 When Proxima Midnight throws her spear it transforms into three tracers of Black Light. These tracers of light cannot be evaded. During her attack on New York City, Spectrum quickly finds out how powerful Proxima Midnight’s spear is. One of the tracers makes direct contact with Spectrum and pierces her right through her gut.  Somehow Spectrum is able to survive, but the spear also poisons those who it strikes.

Her spear was forged from a sun distorted in space-time and thus has the power of a star and a supernova. It also has the ability to create nets with the weight of a star to hold any opponent.

While Proxima Midnight’s spear might be extremely deadly even without it she is a formidable foe. Superior Spider-Man describes the blows she and Luke Cage are delivering to each other as “some kind of seismic activity.”

In fact, Proxima Midnight was able to deliver cracked ribs and a concussion to Luke Cage.

Proxima Midnight actually tosses Luke Cage around like a rag doll until the citizens of New York inspire him to rally with an “Avengers Assemble” chant. And even though there is no clear winner in the fight between Luke Cage and Proxima Midnight, she definitely gives a whole lot more than she takes. 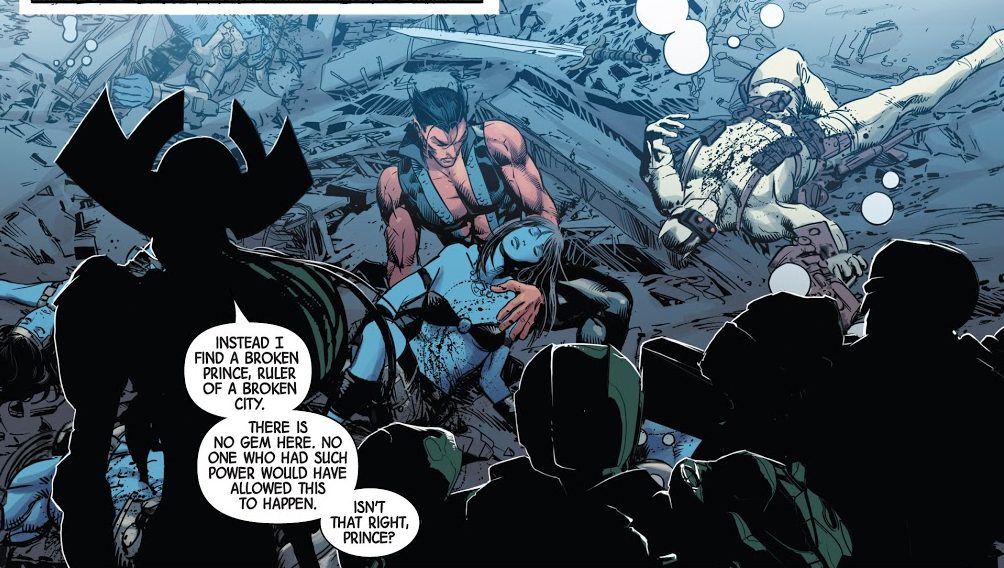 5. Proxima Midnight is Killed by Hela 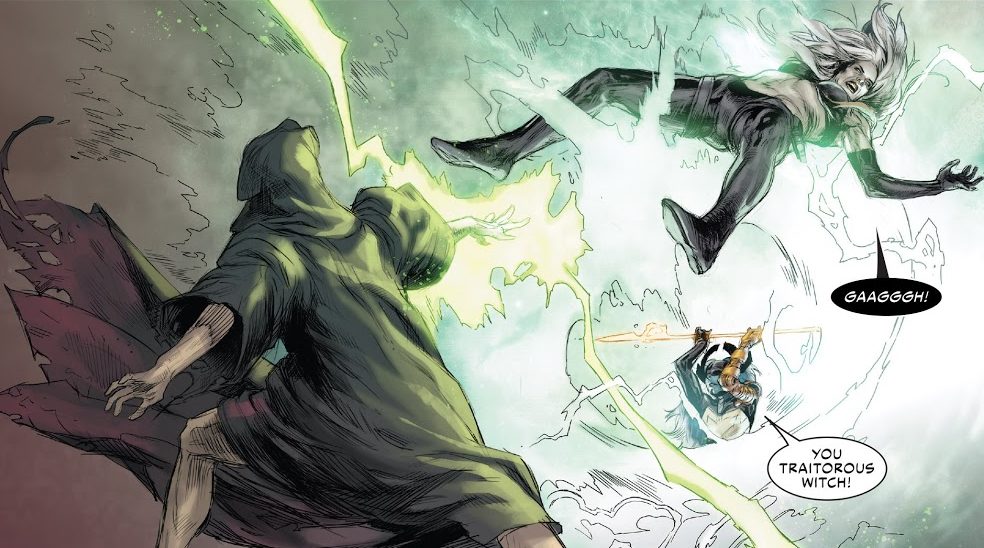 In The Unworthy Thor #5, Proxima Midnight, Hela, and Black Swan were tasked  by Thanos with recovering Mjolnir. However, the three fail in their efforts. Thanos doesn’t care about the hammer as he has his eyes on greater weapons. But the Mad Titan still demands tribute. That’s when Hela launches a viscious attack on both Black Swan and Proxima Midnight. Despite Proxima Midnight’simmense power and the strength of her spear, Hela grabs it with her hand and just holds onto it as she uses her own power to drive her left hand straight into Proxima Midnight’s skull.

There you have it five facts about Proxima Midnight to get you prepared for Avengers: Infinity War! I definitely think a number of these will be seen in the upcoming film. I hope we really get to see the power of her spear, but given the trailer footage it most likely won’t be as powerful as in the comics. We did see Captain America easily dodge it. We also probably won’t see her conquer Atlantis as Namor still remains under Fox’s control for the time being. It’s possible we will see her deployed to the battlefield on Wakanda where she might take on the Hulk to show her true strength. But what might be the most interesting thing that we could see is the return of Hela to kill off Proxima Midnight and promise Thanos what he truly wants: death. She is the Goddess of Death in the Marvel Cinematic Universe after all.

What do you think we will see from Proxima Midnight in Avengers: Infinity War?