**Warning Spoilers for Infinity Countdown #1 Below**

The Infinity Countdown has fully begun and the race to collect the Infinity Stones has started in earnest.

However, the Soul Stone isn’t the only Infinity Stone being sought. In Infinity Countdown #1 by Gerry Duggan and Aaron Kuder, a major battle is being wade over control over the Power Stone. Drax is tasked with defending it, but he might be overwhelmed as there are a number of competing factions who wish to wield it.

Logan infiltrates one of Black Widow’s dead drops in Madripoor. He doesn’t disturb anything, but leaves Black Widow a note telling her, “N- Take care of this -L.” Inside the back of a toilet, Black Widow finds the Space Stone. 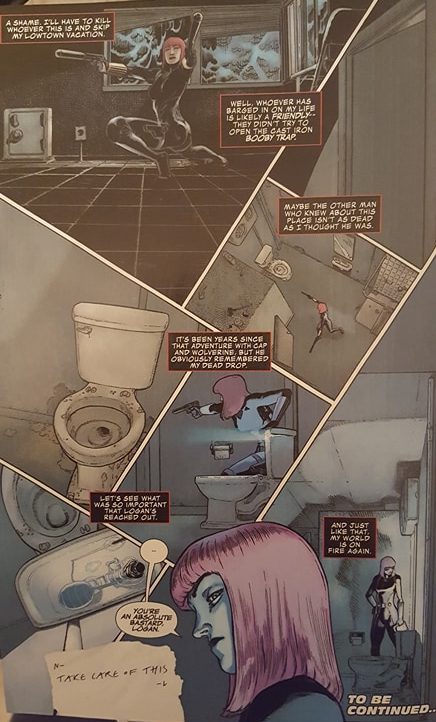 And as she aptly puts it, her “world is on fire again.” It definitely is given what we’ve seen so far in Infinity Countdown. We’ve seen the Soul Stone change possession. There is a massive war being waged over the Power Stone and now the Space Stone has switched hands. Needless to say, those who seem to be in control of the Infinity Stones don’t seem to hold on to them.

Will Black Widow be able to keep the Space Stone secure?