Ever wonder what Thanos’s home world looks like in the Marvel Cinematic Universe? Well, we won’t have to guess because it’s been confirmed that we’ll get to see Titan in the upcoming Avengers: Infinity War!

Since San Diego Comic-Con last summer there has been talk about Infinity War footage which saw Thanos using his Infinity Gauntlet to rip a moon out of the sky to throw it at Tony Stark. While it doesn’t appear we are going to get to see that footage just yet, Entertainment Weekly did release an absolutely stunning image of Thanos using the Power and Space Stones to bring a moon down onto Titan. 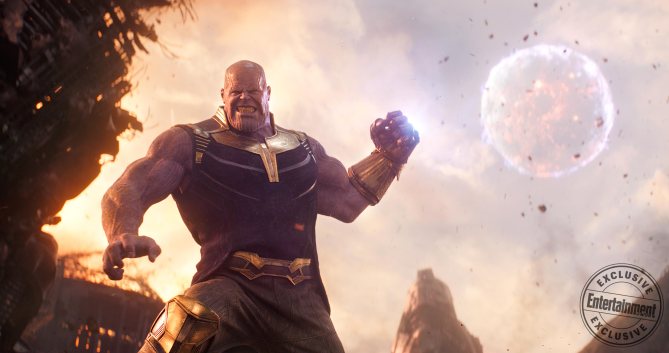 “What do you do with the mad that you feel? If you’re Thanos, you use the purple and blue Infinity Stones to rip a moon out of orbit and hurl it against the ground like a dinner plate. While fans have speculated that this may be devastation on Xander, where the Nova Corps was guarding the purple power stone from the Orb, Marvel tells EW this shot is actually on Titan, the ruined homeworld of Thanos.”

The Outriders are known to be exceptional thieves and assassins. They can phase through walls, break gravity, and become shadow.

Thanks to all of this information we know that Avengers: Infinity War isn’t just a global fight. The war appears to be waged on multiple fronts throughout the galaxy, which makes Thanos even more of a threat.

What are your theories? And are you excited to finally get a full view of the fabled world of Titian? Tell us in the comments below!