We all know that Thanos is a galactic tyrant who has been out in the Marvel Universe since we first saw his devilish smile in the post-credits scene of The Avengers. HOwever, we don’t really know that much about him besides the fact he once had the Mind Stone in his possession and subsequently gave it to Loki in order to acquire the Space Stone. He also has a number of children, who appear to have been stolen and adopted by Thanos. He turned these children into ruthless killers and assassins like Nebula and Gamora.

However, in a new Entertainment Weekly expose we are learning quite a few new details about the Mad Titan.

Marvel Studios boss Kevin Feige provides the details, “He’s from a planet called Titan that’s no longer inhabited because of things that he thought he could help prevent, and he was not allowed to do that.” He continues, “What he feared most happened, and the planet and everybody on it basically went extinct. He vowed not to let that happen again. He thinks he sees the universe going down the tubes. He thinks he sees life expanding outward unchecked. That will bring ruin, he believes, to the universe and to that life.”

In fact, Thanos sees his mission as saving the half universe. But in order to do that he has to kill the other half. Feige says, “That’s either genius or horrific, depending on your point of view, and most of our point of views say it’s pretty horrific.”

Not to mention Thanos is extremely powerful with just the Space Stone and the Power Stone he’s able to smash a moon onto the planet Titan. Feige notes, “All the kind of grabbing-of-the-moon because of the gems, and all…? That’s the fun stuff.”

Avengers: Infinity War director Joe Russo would elaborate on Thanos’ mission, “He’s on a hunt. We’re using a bit of a ’90s heist genre component. Thanos is on a smash-and-grab, and everybody’s trying to catch up the whole movie.”

What I find most interesting is Feige’s first quote about Thanos’ home planet, Titan. The scenario he describes is drastically different from the comics.

Thanos brings murder to his home planet of Titan. He experiments on his classmates and even kills his mother in order to win the affection of Death. He eventually leaves the planet and begins exploring the galaxy with a band of space pirates and sowing his seed across the galaxy. But he eventually returns in order to pursue Death. She tells him to kill off all of his offspring in order to warrant her affection. Thanos willingly carries out her wishes, but eventually confronts her and gets her to reveal that she is Death. This enrages Thanos and sees him return to Titan, where he launches an orbital strike that decimates the planet. 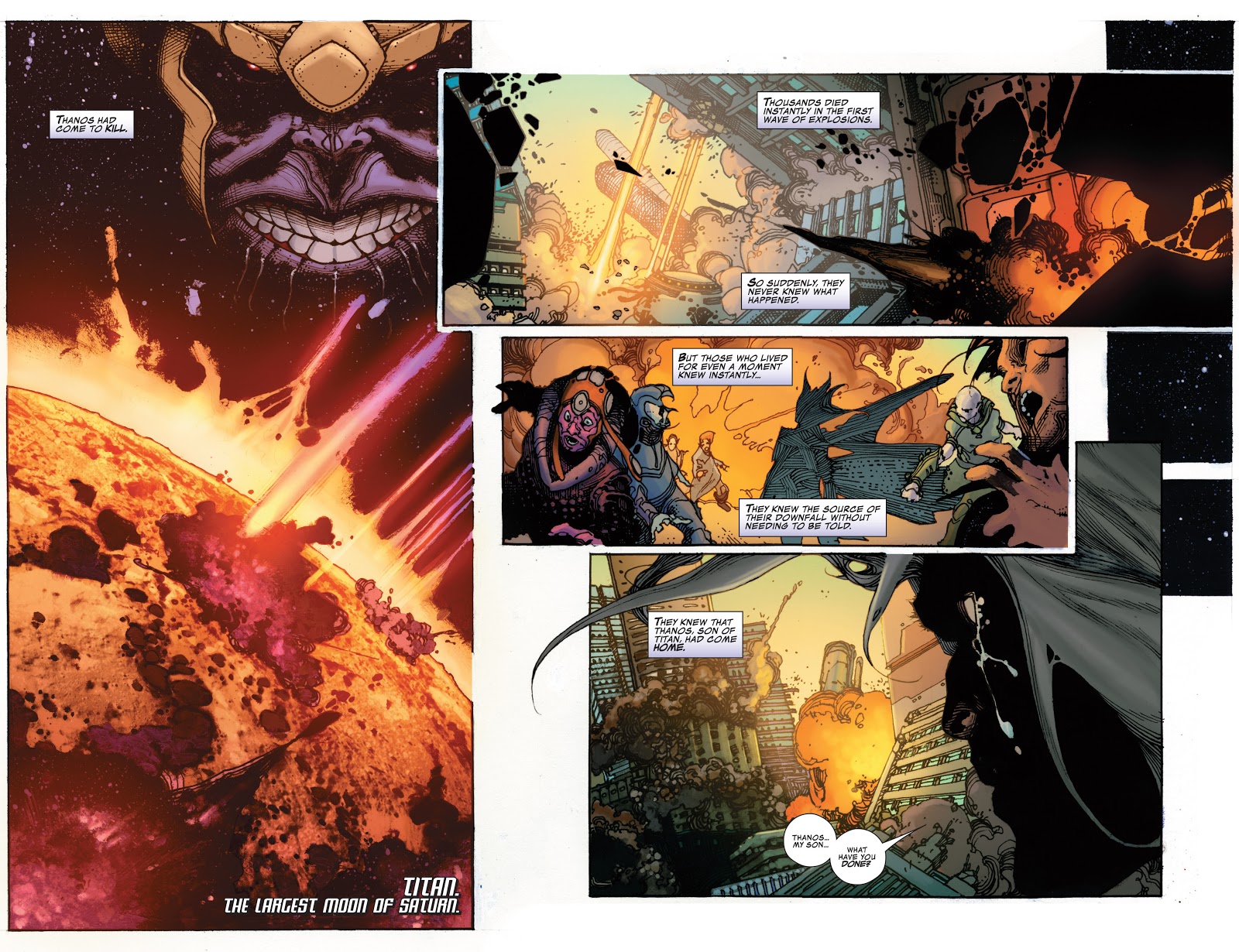 And while Thanos’ orbital strike destroys much of the planet, he makes sure there is but one survivor as he alone among his crew descends on to the planet to completely wipe them out. 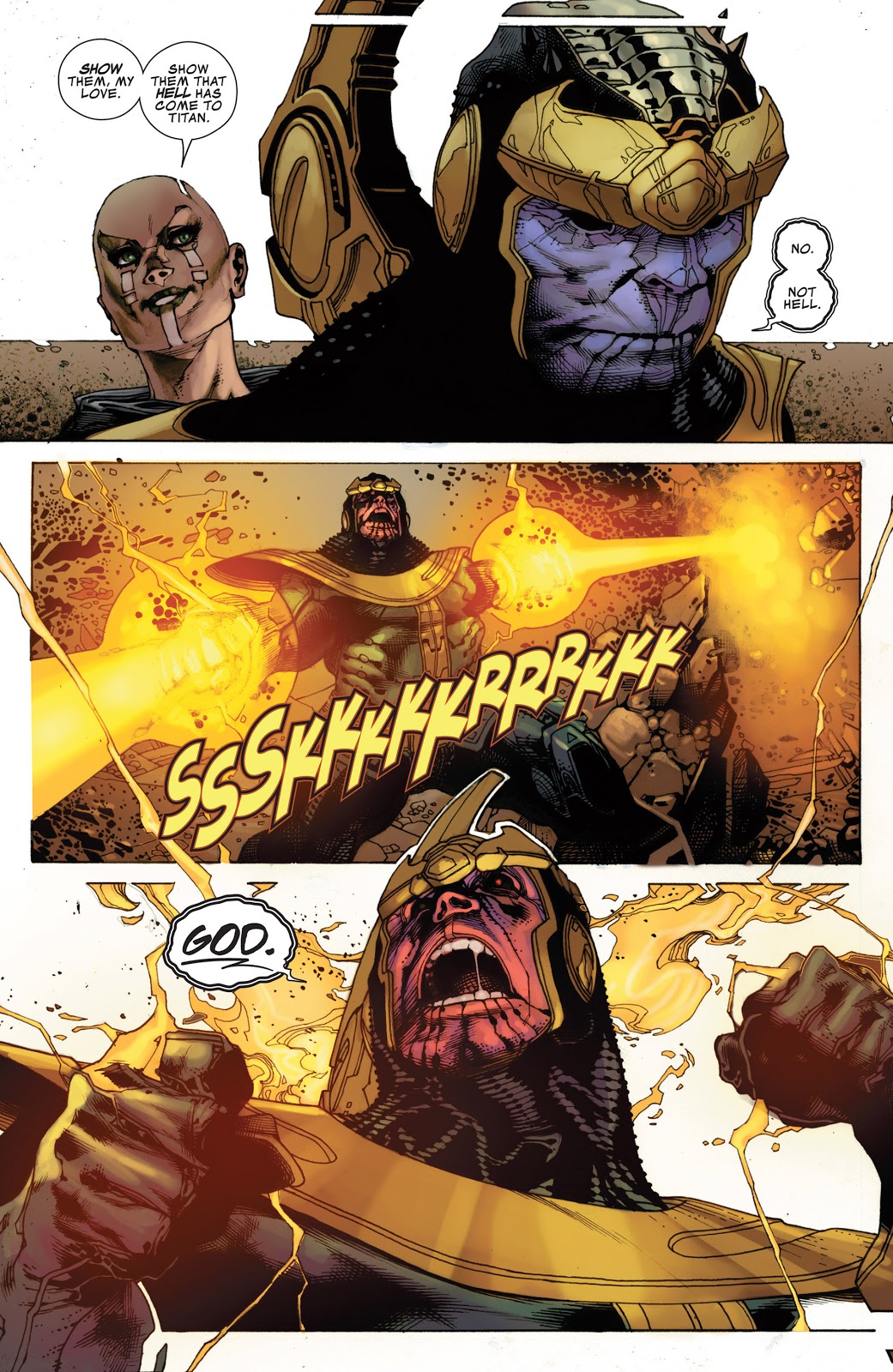 I much prefer the comic book version of Thanos rather than this almost sympathetic version that Feige describes.

What do you think? Do you like that Thanos’ origin appears to have been drastically changed for the Marvel Cinematic Universe? Or do you think Feige might be trying to throw us off the trail and he might just be describing one possible timeline? Or one possible version of Thanos in the multiverse?