In The Punisher #222 by Matthew Rosenberg and Guiu Vilanova the Punisher is on a mission to kill General Petrov the leader of Chernaya, who violently overthrew the previous government in a coup d’etat. He’s been a man on the warpath as he uses the War Machine armor to sow devastation in his wake in order to draw the General out of hiding.

And he’s finally done it. General Petrov was speaking to his troops when the Punisher made his move. He went head first into battle annihilating almost all of Petrov’s infantry units. He even easily destroys a tank. But things start to go south when Frank Castle is hit with a giant truck and former S.H.I.E.L.D. agents who are now in the employ of General Petrov confront Frank with their own empowered suits.

However, Frank Castle has faced these guys before. And admittedly they kicked his butt the first time, Frank Castle learns his lessons and he won’t make the same mistake again. In fact, he easily takes out one of the S.H.I.E.L.D. agents in what might be one of his best kills ever.

The S.H.I.E.L.D. agent is pontificating about the previous time they subdued Frank Castle and how he should just give up because he doesn’t stand chance. He even tries to butter Frank Castle up by telling him he’s a fan of his work. 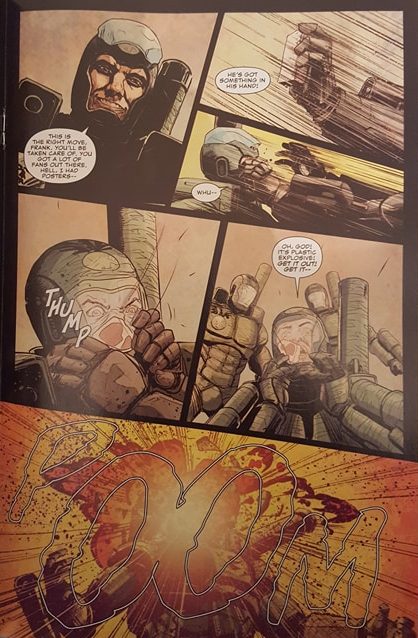 Talk about brutal. If he was such a fan he should have known you don’t mess with Frank Castle.