It won’t be long before James Wan’s Aquaman hits theaters on December 21st. It has a terrific cast to bring some of DC’s greatest characters to life. Two of DC’s most infamous villains are debuting in the film. Many fans are aware of the most famous of the two, Black Manta. He’s been in every evil team on DC’s roster. But that isn’t the case for this next villain. No, this villain has his sights set on the Throne of Atlantis. And he’s more than willing to go through Arthur to get it. The wonderful actor Patrick Wilson has been cast as Ocean Master Orm.

The plot of the film will most likely be driven by Orm. Geoff Johns recently gave the character a fantastic new origin in The New 52. Considering he still has some influence at DC Films, the story for Aquaman will probably resemble his own. This makes Orm and Arthur two Atlanteans vying for the throne. A dramatic and almost Shakespearean story that’s not unlike this past February’s Black Panther. A story about a King earning the right to lead his people.

Even if it’s been done before, it hasn’t been done by James Wan, Jason Momoa, and the rest of the folks over at DC Films and Warner Bros. Not only that, Ocean Master Orm is an especially vicious villain. Patrick Wilson will have the time of his life bringing the powerful pirate to life. To get you prepared for the upcoming film, here’s five facts about DC’s latest villain. 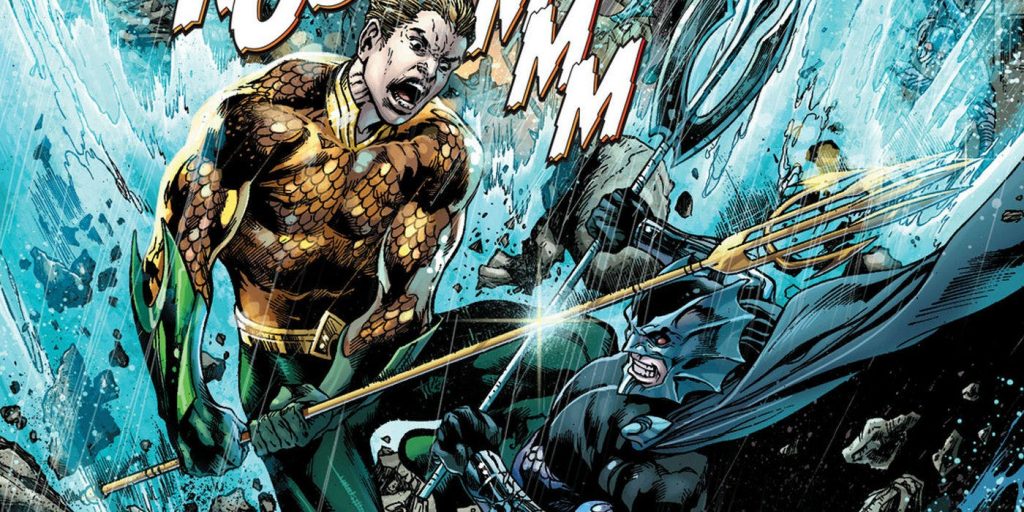 In the character’s most recent interpretation by comic genius Geoff Johns, Orm is Arthur’s half brother. He’s the younger son of Queen Atlanna and grows up hearing about the surface world, as well as vague references to a brother who lives there. Although the two quickly become enemies, the first time they meet is fairly peaceful. While the two have had a storied history of wars and battles, Johns decided to make things a little more complicated. In doing so, he made Ocean Master Orm an even better villain to plague Atlantis. 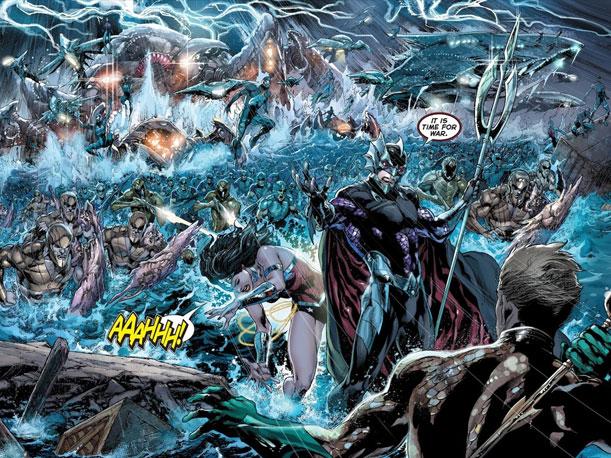 Throne of Atlantis is one of the best cross-over events of The New 52.  Geoff Johns combined his work on Justice League and Aquaman into an epic event involving a massive Atlantean attack on the surface world. Led by none other than Ocean Master Orm. Just how can Orm start such a battle? Because he’s the King of Atlantis. At the beginning of The New 52 Arthur is an exile who knows little of his home. Before he finally takes the throne, it’s Orm who first sits upon it.

3. Ocean Master Orm has teamed up with Black Manta! 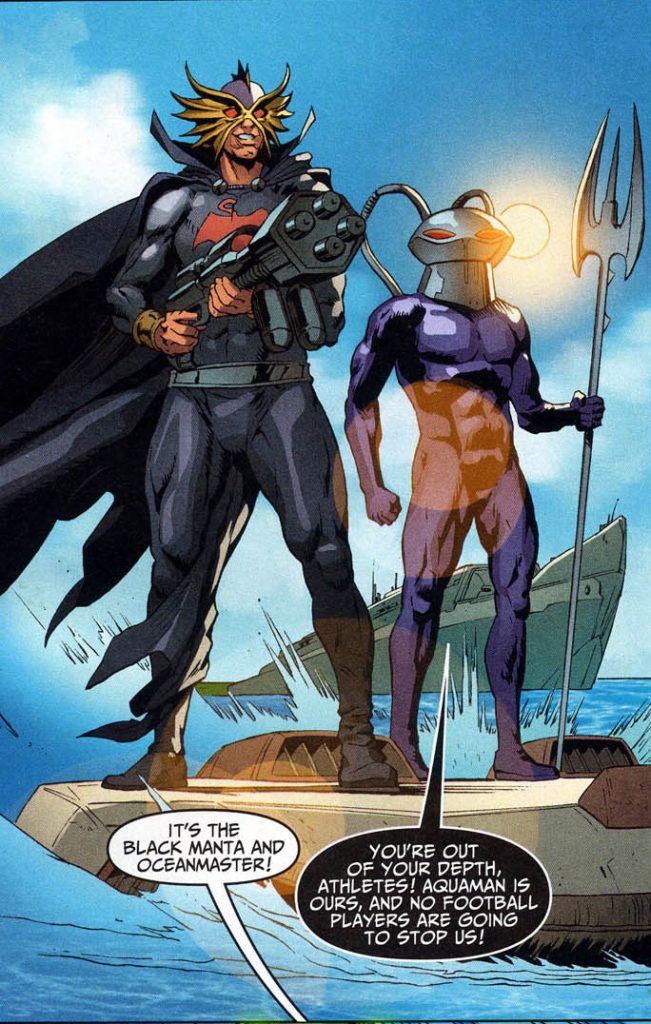 Great minds think alike. Well, apparently evil-doers do too. Ocean Master Orm and Black Manta have often teamed up in the comics against their famous foe, Aquaman. While Black Manta has been on more of DC’s evil teams than Orm, it doesn’t hurt to have another pirate who’s capable of underwater battle on your side. Manta and Orm both have reputations as bloodthirsty criminals who will stop at nothing to get what they want especially when it comes to Arthur Curry and the Throne of Atlantis.

Mera isn’t the only one with some ridiculously awesome powers. Hydrokinesis is the ability to control water. Mera was most recently seen using this power in her own comic and in Justice League. But Orm is also capable of this terrible power. He may even be more powerful than Mera! Orm’s helmet and crown varies in the technology it uses, but more recently Orm has been using it to control the very oceans. If Patrick Wilson’s version of the character has that power he might just be more than a match for Jason Momoa’s Aquaman.

5. His trident controls the weather 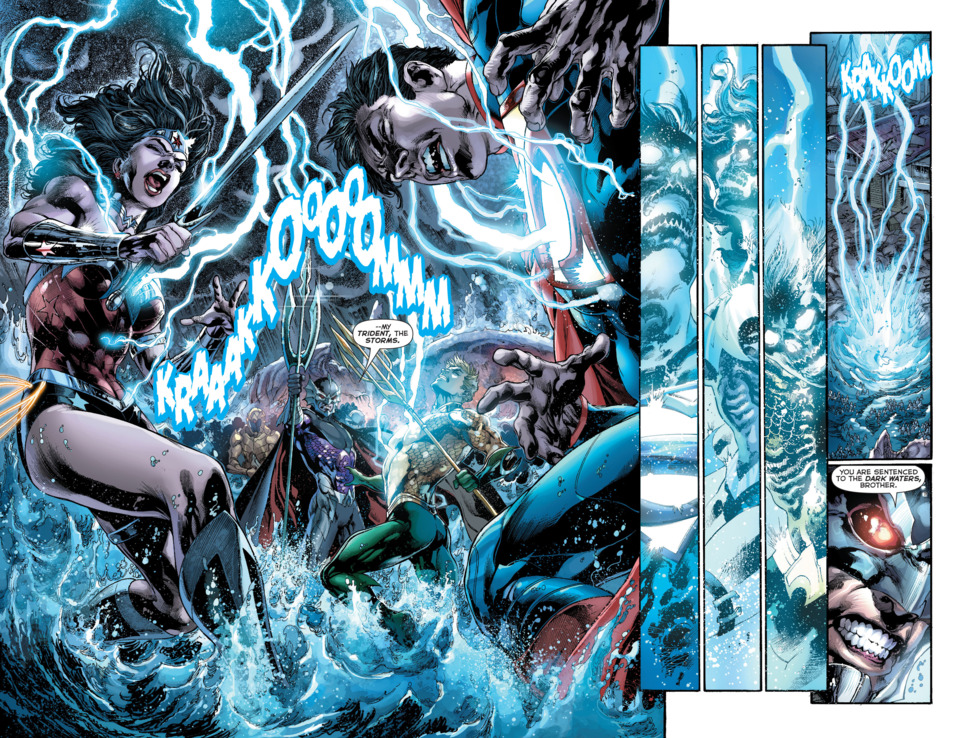 Aquaman is, hands down, one of the most powerful superheroes on the planet. He has a plethora of powers including: enhanced strength, endurance, healing, the ability to breathe underwater, the ability to command underwater life and more. But most of those are the powers that come with being an Atlantean. The kind of people who have to survive the brutal conditions of life under the waves. But Ocean Master Orm needs more weapons if he’s going to get the upper-hand against someone like Arthur. The trident is the symbolic weapon of Atlantis. Almost as meaningful as the throne. Well, Ocean Master Orm has one. And his controls the weather! As seen in the above battle, Orm can use his trident to summon harsh elemental powers to strike at his foes. Another one of the many details that make Patrick Wilson’s Ocean Master Orm one of the most exciting parts of this year’s Aquaman!

He will definitely be a fearsome foe for Jason Momoa’s Aquaman when Aquaman comes to theaters on December 21, 2018.