In Marvel 2 in One #4 by Chip Zdarsky and Valerio Schiti, Ben Grimm and Johnny Storm are on the hunt for their lost two members who have disappeared into the Marvel Multiverse. However, there is hope to find them. Reed Richards left behind a device called the Multisect that allows Ben Grimm and Johnny Storm to traverse the Marvel Multiverse and find Reed and Sue Richards along with their kids. The two are joined by a scientist who goes by the name of Rachna and they begin their search for the missing Richards family.

Before they begin their journey into the Marvel Multiverse they get brand new suits that are just hideous to look at it. However, it appears they might be functional as not only do Johnny Storm and Ben Grimm have the suits on, but so does Rachna. Despite the apparent functionality they are still an eyesore to look at. 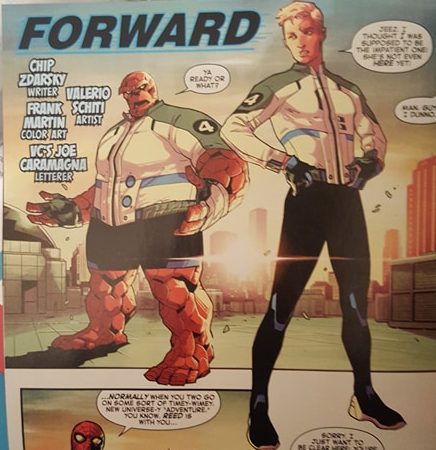 It looks like they might have gone shopping down in Atlantis because those suits have jarring shade of teal to them. And if you look closely you can see its not just teal. There’s almost a sky blue color running across The Thing’s chest. The suits aren’t even symmetrical. Just look at those hideous buttons on The Thing. Why would you put buttons on a superhero suit?

But Johnny and The Things’s suits aren’t the worst of it. Rachna’s suit is the worst because it incorporates orange with the the same teal and sky blue as Johnny Storm’s and The Thing’s suits. 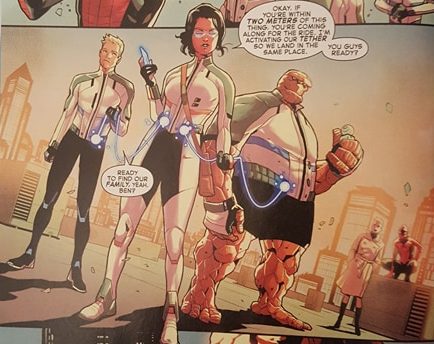 It looks like colorist Frank Martin was spending too much time staring at an aquarium when he was coloring these suits.

Am I being too harsh? Do you think these suits look all right or do you agree with me and these suits are straight hideous?