Valiant has created a pretty interesting universe, mostly making modernized versions of the 1990s creation from the original company. Their books are characterized by stellar art, though the stories have been hit and miss. However, in the last year or two, there’s been a lack of a fun factor in several of Valiant’s books. They take superheroes a bit too seriously, using artsy indie writers to tell tales that sometimes don’t fit the concepts. 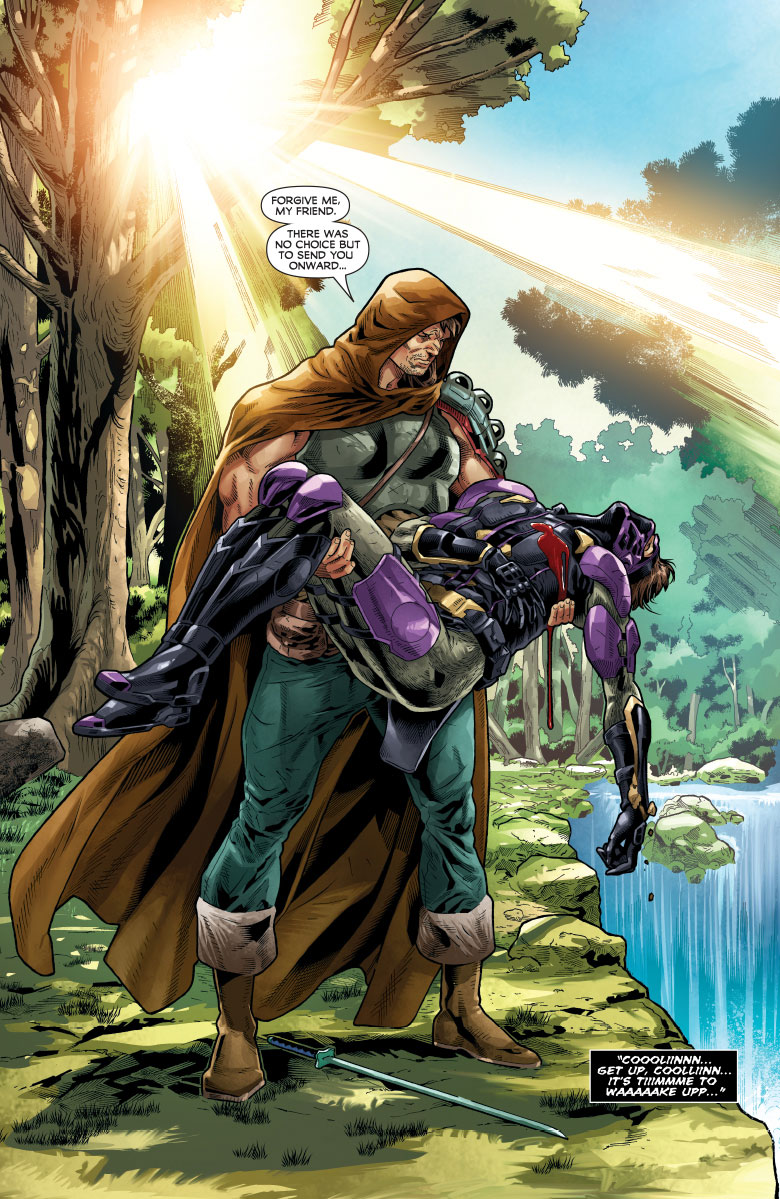 Ninjak vs. the Valiant Universe changed that. It was originally supposed to be a web series, which would pit Ninjak vs. different Valiant heroes and villains. Something delayed the production indefinitely (the company didn’t say), and they launched a 4-issue miniseries around the concept. According to the book, this was originally a screenplay written by Aaron Schoenke, and it was adapted into comic form by Eliot Rahal. Joe Bennett is on pencil duty. The storyline started with Ninjak being blackmailed with his MI-6 handler Neville’s wife and child in the clutches of enemy hands unless he obtained the Book of the Geomancer from the MI-6 vaults. He went about doing so, and went on a complete action romp in issues 1-2.

Issue 3 starts by reminding the reader Ninjak has been shot by Bloodshot. He ends up in the Deadside—a realm of the dead, where he talks with Shadowman freely, away from the monitoring of his enemies. We learn that Bloodshot hit him with a special bullet that only half-kills him. The concept was not explained very well. The Deadside and Shadowman’s involvement were also poorly explained. If I were not already heavily invested in Valiant, I would have found these parts wholly confusing. This product which in theory should be aimed as a simple introduction to characters, missed the mark a little on that level, and on the plausibility level with the magic bullet concept. 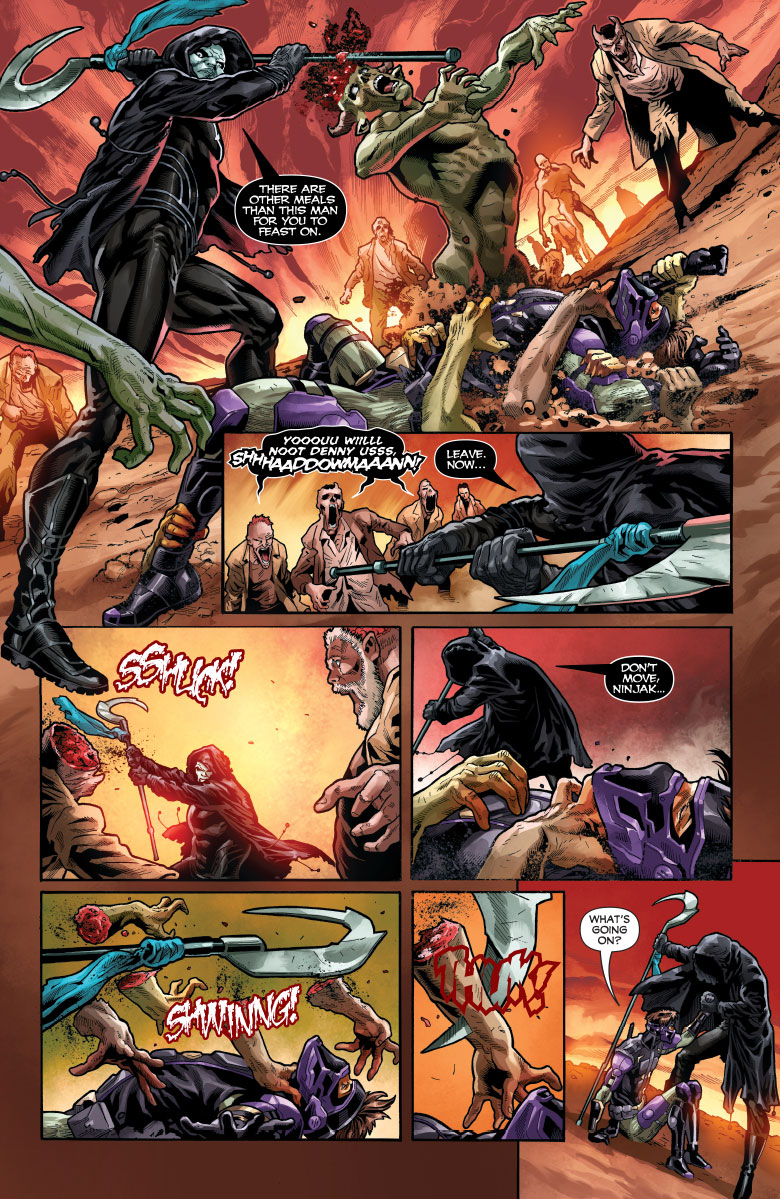 It gets right back into action, however, and things turn in a pleasant way to set up the final issue, where Ninjak won’t be fighting allies anymore, but the enemy.

The art in this issue is a little wonky at points. Talking head panels, some not drawn quite up to typical Valiant standards, and some weird looking figures at points that feel disproportionate. It gives it a higher quality indie comic feel rather than what I typically see from Valiant. The action feels good and it mostly flows right in the layouts, aside from a couple of pages. 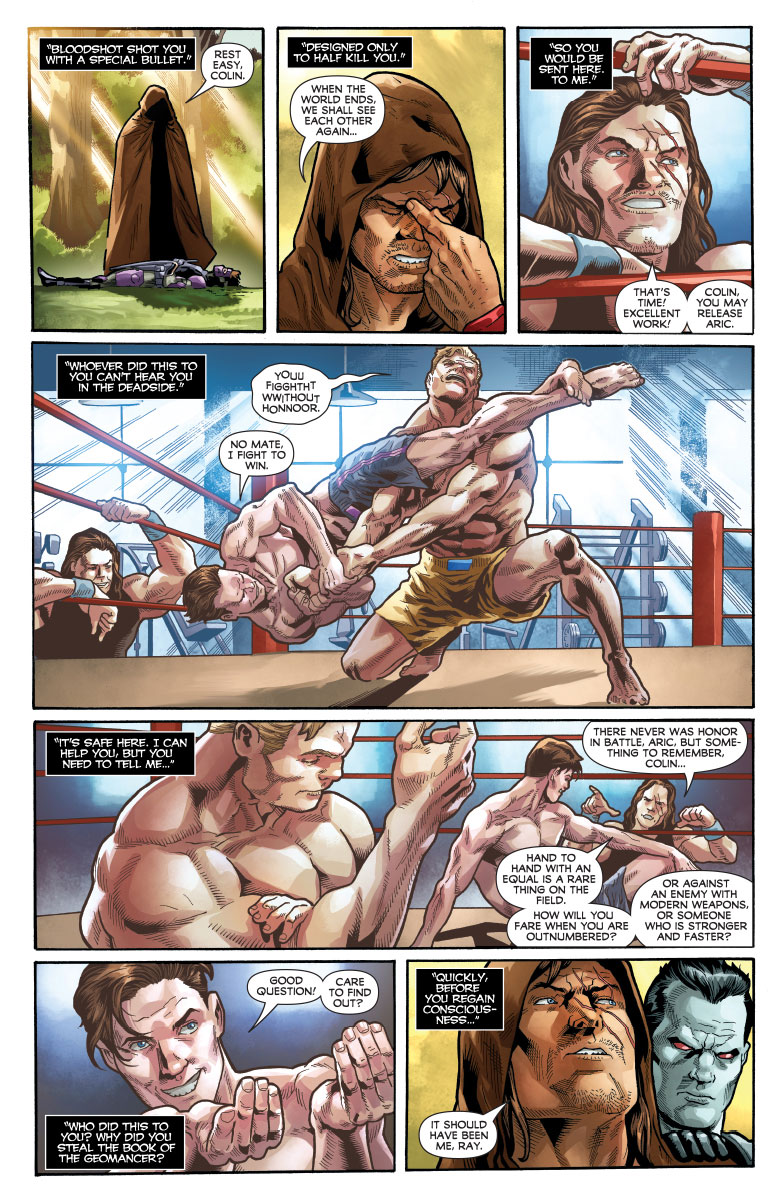 Overall, this issue wasn’t quite as good as issues 1-2, which is a difficult comparison as those issues marked some of the funnest product Valiant’s put out to date. This doesn’t feel decompressed, and four issues feels about right for this story. It’s a simple story (aside from the Deadside trip), but it does have the fun-factor I’ve been looking for in Valiant books. I hope Valiant sees it as a success so we get more action-filled books like this in the future.