The storyline takes place in Marvel’s 2013 mega crossover event Infinity. In two tie-in issues from Mighty Avengers by Al Ewing and Greg Land, Thanos tasks The Ebony Maw to destroy New York City. However, the plan is altered when Proxima Midnight volunteers to act as a distraction allowing The Ebony Maw to strike where the Mighty Avengers are not looking. Thanos approves of the plan and the invasion begins. 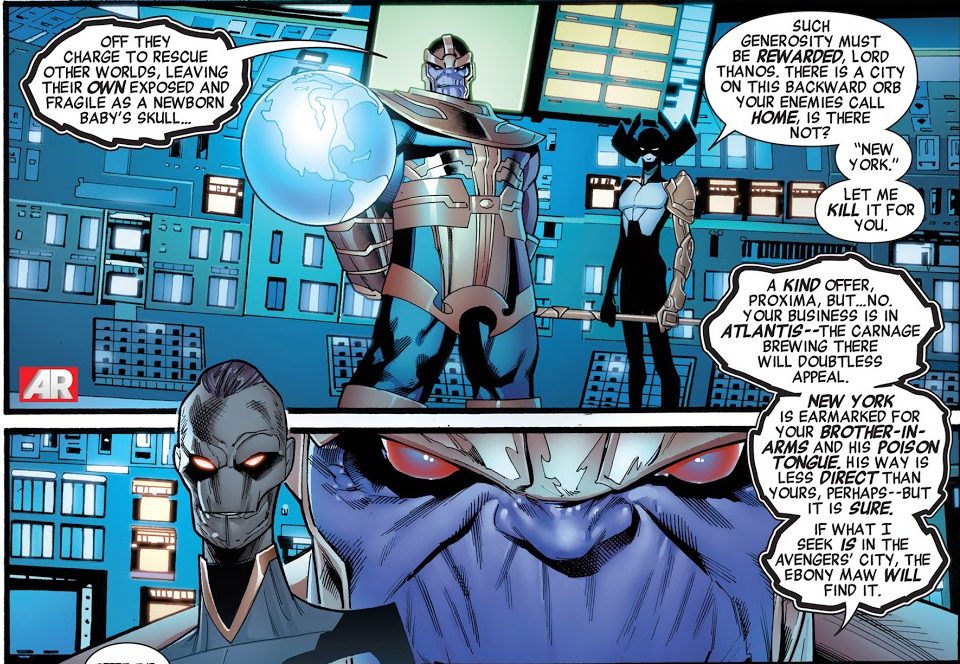 While Proxima Midnight launches a frontal assault on New York City, The Ebony Maw strikes from the shadows and targets Doctor Strange. The Ebony Maw uses his powerful psychic abilities to manipulate Doctor Strange to only hear what he and Thanos want him to hear.

And while The Ebony Maw whispers whatever he wants in Doctor Strange’s ears, Proxima Midnight begins wreaking havoc on the Mighty Avengers led by Luke Cage. Eventually Thanos’ patience runs thin and he recalls Proxima Midnight to send her to Atlantis and conquer the forces of Namor. But right after she leaves, The Ebony Maw uses Doctor Strange to summon an extremely powerful alternate dimensional beast known as Shuma-Gorath. This creature is so powerful it claims to have “fed on the screaming souls of universes.” It goes on to say it “drank the spoiled milk of dead stars.” It’s also “the emptiness outside all of understanding.” 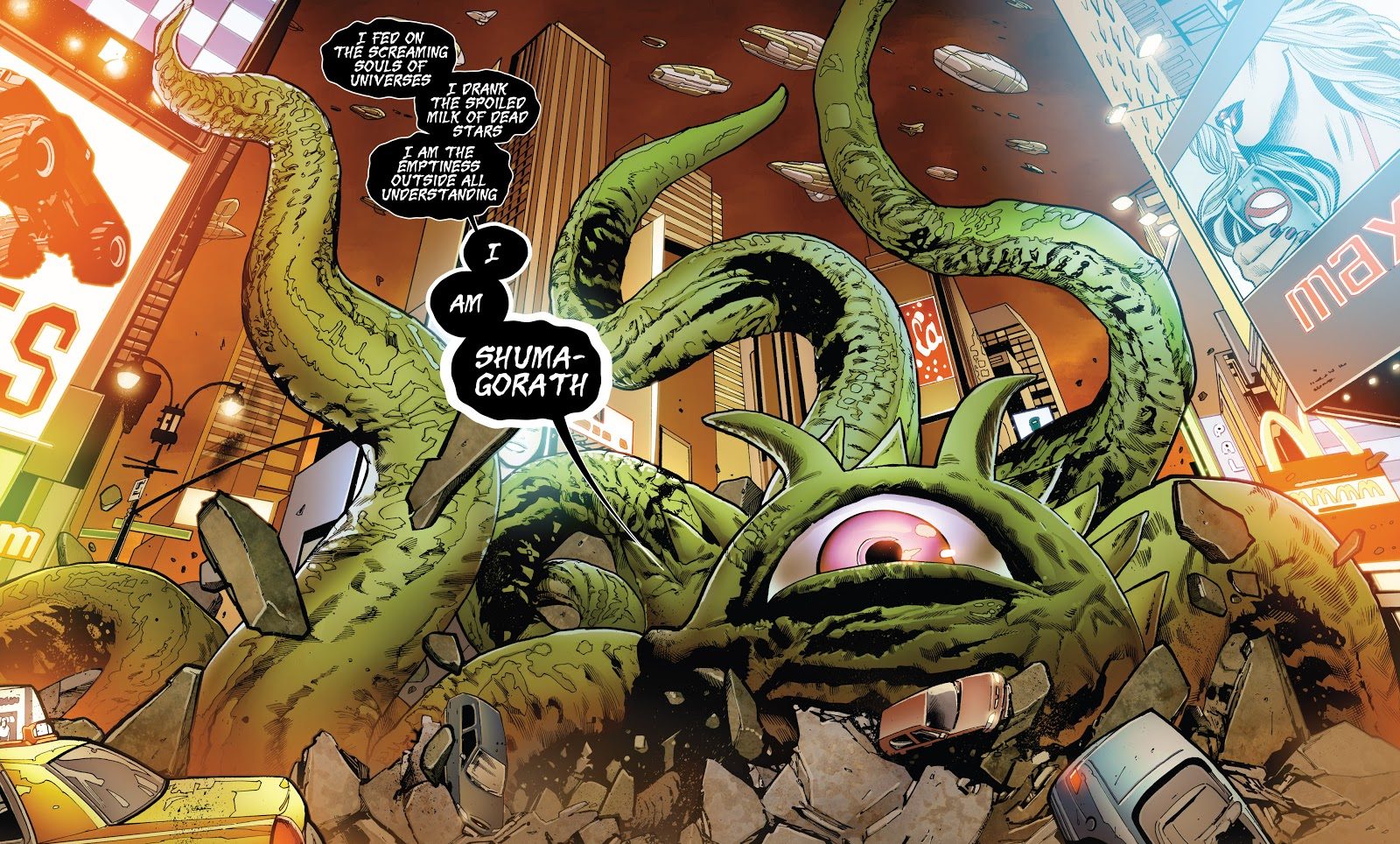 And while the Mighty Avengers would find a way to defeat Shuma-Gorath, The Ebony Maw still controlled Doctor Strange and had other uses for him. Most notably he was mentally torturing him for the location of Thanos’ last surviving son, Thane. 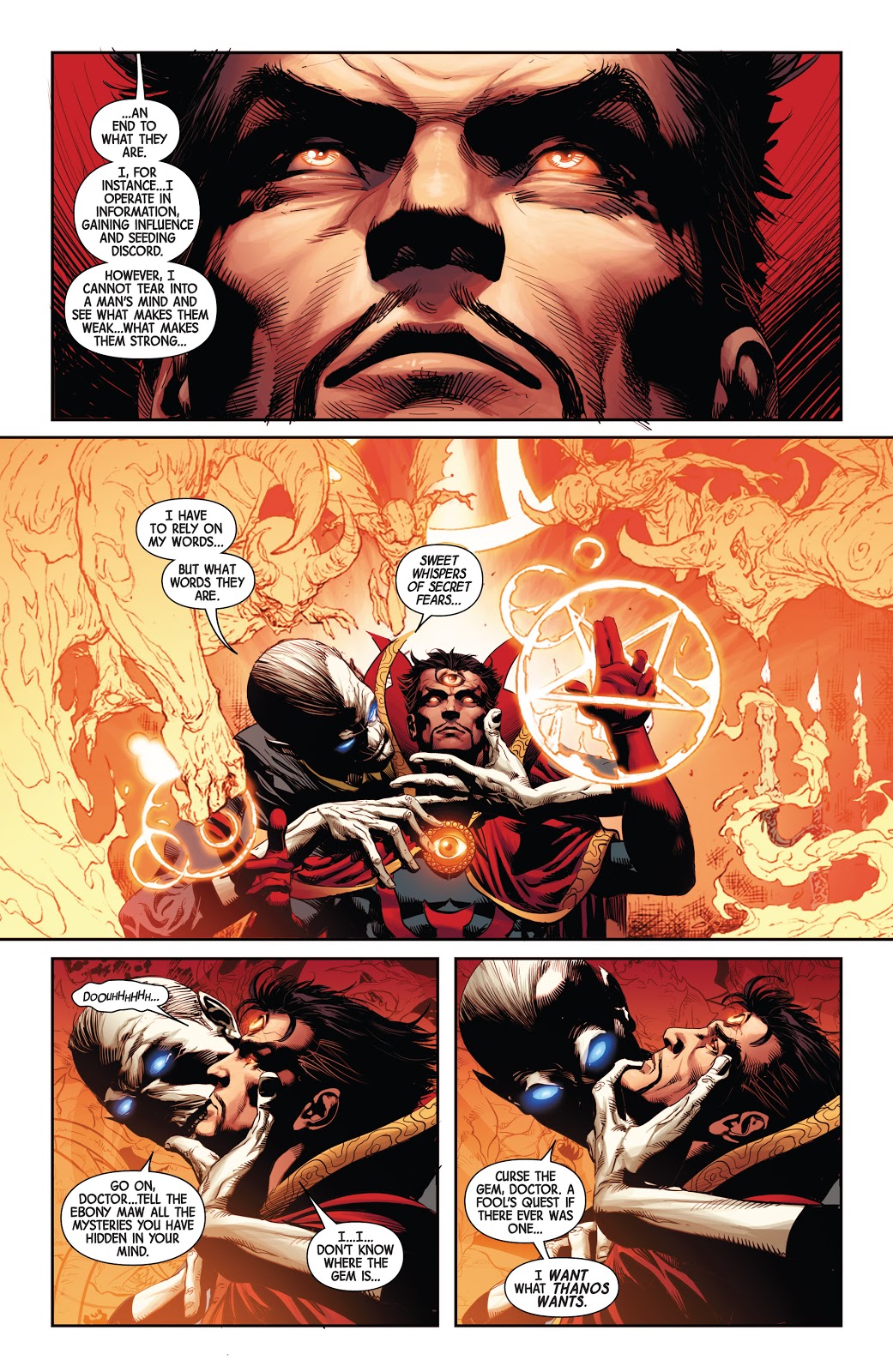 But Doctor Strange is not the only one to fall the powers of The Ebony Maw. Before he got his claws into Doctor Strange, The Ebony Maw easily defeated Wong and trapped him in energy circles right inside the Sanctum Sanctorum in New York. 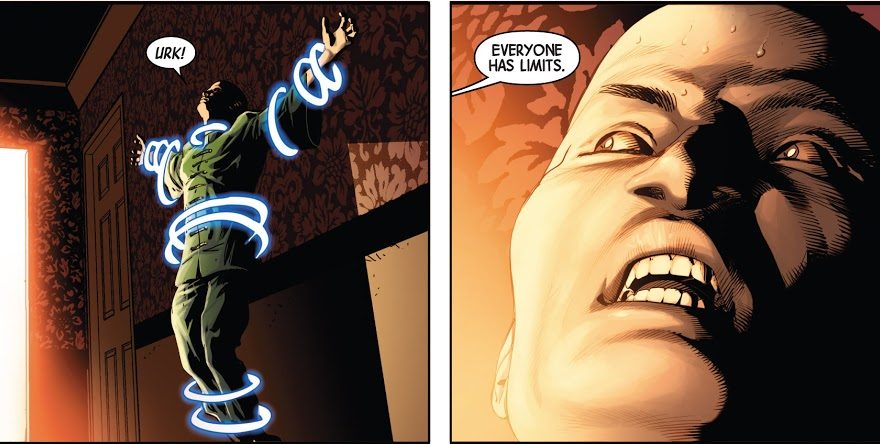 As you can see, The Ebony Maw is immensely powerful to not only subdue Wong, but to ultimately manipulate Doctor Strange to summon a world devouring alternate dimensional creature. And even when the summoning ultimately fails he is still able to maintain control to find what Thanos seeks.