There were rumors about a year ago that Dinklage had joined the Marvel film, but there weren’t any details as to who he would be playing. Many believed he might give voice to one of Thanos’ Black Order. Kevin Feige did hint there would be interesting voices bringing the Black Order to life.

While Dinklage’s exact role in the film still hasn’t been confirmed, he will be part of Avengers: Infinity War. In the most recent poster released for the film, you can see Dinklage’s name in the credits right next to Idris Elba and Benedict Wong. 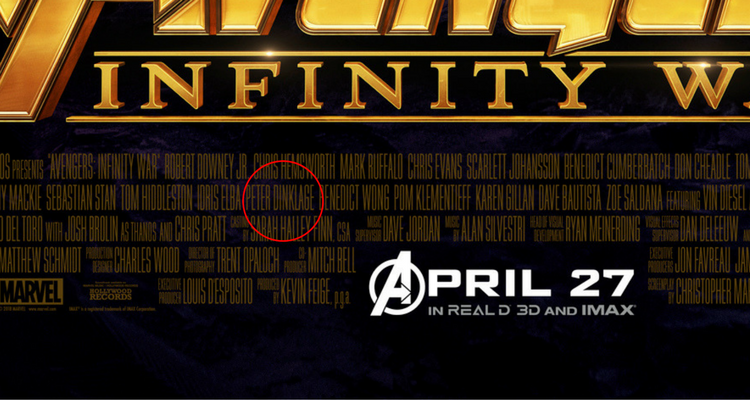 The Black Order consists of Proxima Midnight, Cull Obsidian, Corvus Glaive, and the Ebony Maw. It’s unlikely Peter Dinklage will give voice to Proxima Midnight given she’s a female. That leaves the possibility of Cull Obsidian, Corvus Glaive, and the Ebony Maw. We know Irish actor Tom Vaughan-Lawlor did the motion-capture work for the Ebony Maw, which might rule him out. However, given Feige’s quote it’s possible they brought in other people to give voices to the character much like George Lucas did for Darth Vader.

It’s definitely exciting to see Dinklage join the Marvel Cinematic Universe. We’ve seen him put on great performances in Game of Thrones and his role in X-Men: Days of Future Past as Dr. Bolivar Trask was just brilliant.

Who do you think Peter Dinklage will play in Avengers: Infinity War? Do you think he will be one of Thanos’ Black Order?

Avengers: Infinity War will storm into theaters on April 27, 2018. Pre-sale tickets are already on sale at Fandango.