Thanos looks ready to wipe out half of the universe on Empire’s new Avengers: Infinity War cover. Thanos has collected all six of the Infinity Stones and fully powered the Infinity Gauntlet. He almost looks like he is ascending into godhood as he heads tilts skyward and his body is seemingly jettisoned upwards. 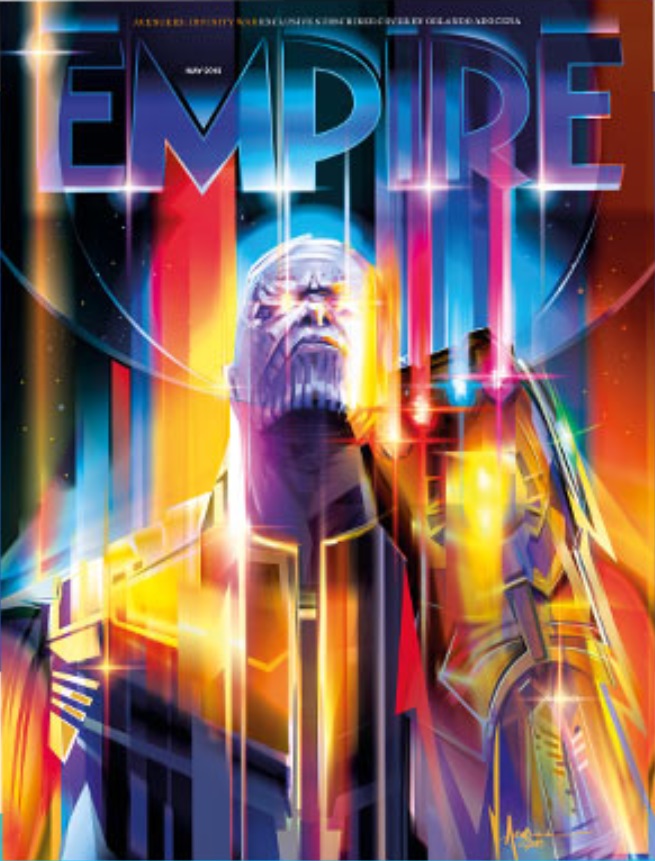 As we learned from the last trailer, Thanos’ mission is to collect all six of the Infinity Stones to power the Infinity Gauntlet. Once he has fully assembled the Infinity Gauntlet he plans to wipe out the population of half the of the entire Marvel Cinematic Universe. He believes he is bringing balance to the universe.

However, he’s going to have to go through the Avengers in order to acquire those Infinity Stones. In fact, the Avengers have at least two Infinity Stones. Doctor Strange controls the Time Stone in the Eye of Agamotto and Vision still wields the Mind Stone. However, Thanos appears to control both the Power Stone and the Space Stone when he invades Earth.

We know the Power Stone can destroy entire planets by just making contact with the surface and the Space Stone allows you to teleport all across the galaxy. It makes Thanos extremely powerful. It’s more than likely that he will acquire all of the Infinity Stones by the end of the movie. We’ve seen Doctor Strange captured and tortured by Ebony Maw. We’ve also seen leaked photos where Vision has been imprisoned. There’s also a leaked video of Thanos interrogating the Collector in order to find the location of the Reality Stone. That leaves just the Soul Stone for Thanos to acquire.

Do you think Thanos will gather all of the Infinity Stones? Or will the Avengers be able to thwart him?