“Remember this – I did not choose to fight. Know this – I shall end it.”

The Brave and the Bold: Batman and Wonder Woman #1 was one of the best debut comics in years. Art this good hasn’t been seen since Liam Sharp made his DC Comics debut with Greg Rucka on Wonder Woman: Rebirth. He has somehow brought his uniquely elaborate and ornate art style over to his writing. Sharp is at the helm of both word and panel in this new series. A difficult task. But page after page he proves himself to be one of the best talents in the business as a writer or an artist. The Brave and the Bold: Batman and Wonder Woman #2 is another incredible entry into one of the most unique stories ever told under a Top 2 publisher.

High King Elatha is dead. Essentially, he’s a Celtic god who helped to maintain the realm of Fae. Now, that balance is falling apart. The entire realm is succumbing to suspicions about the murder. But they have help. Wonder Woman is brought in to help as a mediator in these difficult times. There is no one better. She’s a skilled warrior, but Diana is no friend to war. She loves, she wants peace. These beings of Fae are beautiful and mysterious. Made all the better by the art of Liam Sharp. Wonder Woman might be in over her head. But someone else is starting to see the signs. Someone used to darkness.

The Brave and the Bold: Batman and Wonder Woman #2 starts to bridge the stories of ghosts in Gotham and the murder of a Celtic god. A magical and mystical tale that gets more alluring with every page.

“The perfect reveals only truth….Do you not believe me?”

Wonder Woman starts to get interested in the death of King Elatha. More than anything else, there appears to be no motivation for this crime. Which is very refreshing. So many stories, in comics or film, reveal their villains early on to tease their entire story. In Prometheus and Alien: Covenant, audience members know that David is up to no good. The same can be said for most comics. The villain is revealed because they’re the subject of the next arc. It’s basically an advertisement.

But that couldn’t be further from the case in The Brave and the Bold: Batman and Wonder Woman #2. This mystery is still completely mysterious. The motivations are unclear. This entire world of magic and fairies is still something Diana is getting used to, and it’s thrilling to read.

But Bruce has his own problems. The last issue left Batman with his eyes glazed over by the magic lights over the Irish section of Gotham City. But Alfred is able to talk the hero through it. As the first act of this new story comes to a close, Batman and Wonder Woman will soon find themselves on the very same mission. And it happens to be one of the best stories on comic book shelves.

“You came along and you stopped a war, Princess.”

The Brave and the Bold: Batman and Wonder Woman #2 will take a long time to read. Because the art by Liam Sharp, the colors by Romulo Fajardo Jr. and the letters by ALW’s Troy Peteri are all incredible, breathtaking pieces of art. The edges of this comic deserve to be gilded and bound in leather (you heard it here first)! This is one of the most beautiful books ever released. Forget that it’s a superhero comic starring Batman and Wonder Woman. Forget the famous Brave and the Bold branding. Thanks to the beauty of the pages and the unique story, there has never been anything like this since the days of real fairy tales.

Sharp wraps every page in beautiful book-ending architecture. It shapes the story as it moves along. But also helps to differentiate between chapters. The streets of Gotham do not resemble the world of Fairy. Sharp gives each world it’s own living and breathing identity. It makes the story even better when the two worlds bridge. 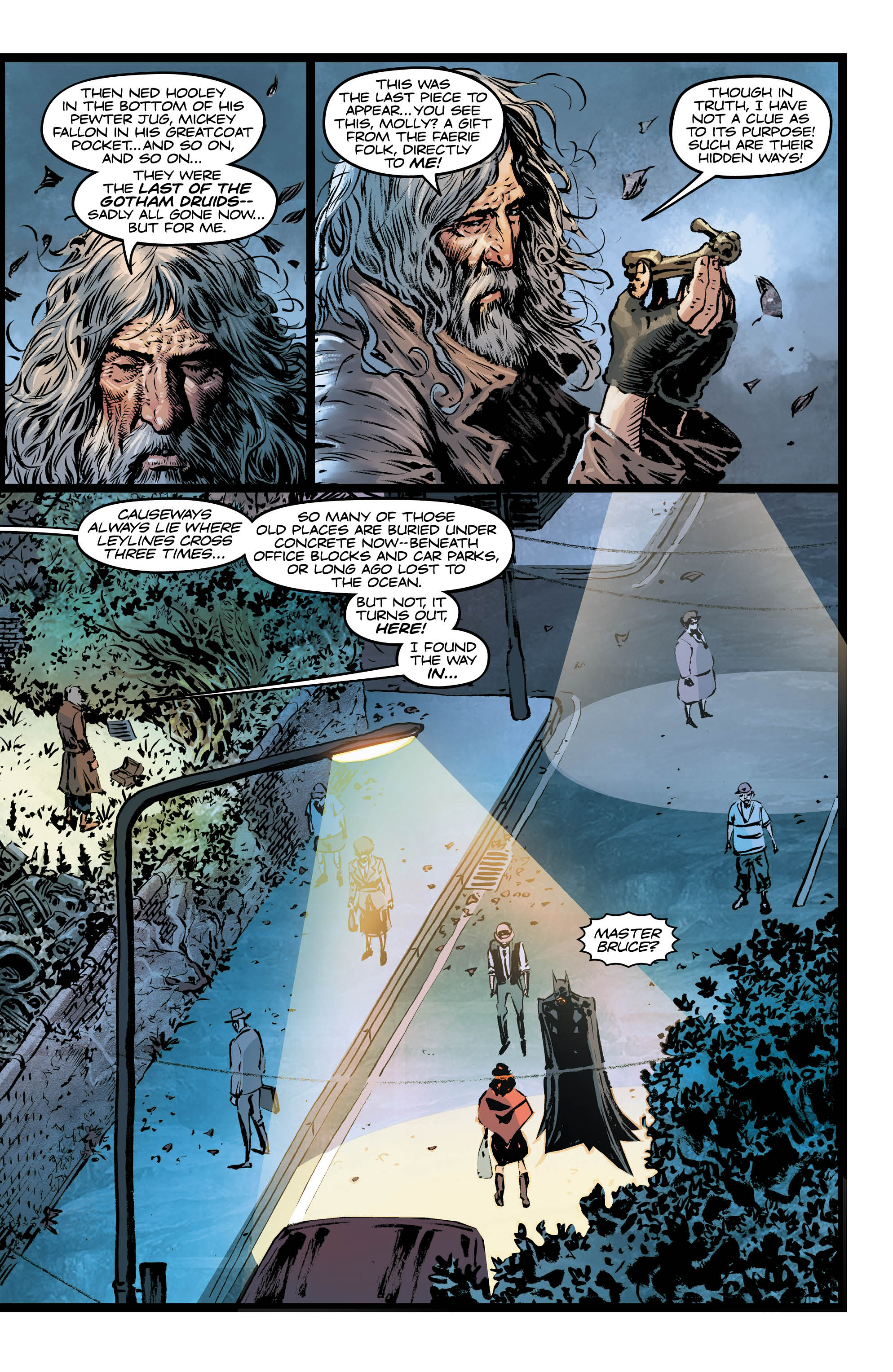 Special mention should be made to letterer Troy Peteri: this work is incredible. The complexity and sheer number of fonts used is daunting. Not only that, the letters are so important in selling the specific tone of this comic. It looks and feels like the old English it’s meant to resemble. A testament to his talent as a letterer and the genius of Liam Sharp’s design.

At times, The Brave and the Bold: Batman and Wonder Woman #2 can be difficult to read. The characters have complicated names and speak in a complicated manner. But Wonder Woman and Batman were thrust into a story without prior-knowledge, and so is the reader. Though the story bridges a new Universe with two of DC’s greatest characters, it’s got a simple premise. A King is dead. His presence helped to hold a peace over the realm. Now, that peace is threatened. The fairies have sought out Wonder Woman for aid, and Batman’s help will probably be along shortly. It’s a weird story that you don’t read every day. But you’re going to want to.

Writer and artist Liam Sharp continues the momentum he started in his wonderful debut. As more of this realm, and how it’s infecting Gotham, is revealed the story only gets more mysterious. This is a murder mystery, after all. So the world’s greatest warrior and the world’s greatest detective will star in a story that’s…out of this world.

Pairing Batman and Wonder Woman together isn’t original; neither is the ancient folklore Sharp is using to tell his story. What is new is his approach. There’s no learning curve for Diana and Bruce or the reader as they figure out this new world and how it relates to their favorite heroes. This could end up being one of the most difficult cases Diana and Bruce have ever had to work on. Readers can only hope that Sharp has more and more such stories up his sleeve.