In the pages of Justice League #41 by Christopher Priest, Philippe Briones, and Jeromy Cox, there is political turmoil in East Africa. The Justice League’s Watchtower has crashed to the ground and the core Justice League team of Superman, Wonder Woman, the Flash, and Cyborg are waiting for the Green Lanterns to return to Earth to relocate it.

However, the crash has landed the Justice League in the middle of a geopolitical conflict they want no part of. There are numerous sides each trying to take advantage of the situation. There are refugees seeking safety and protection from the Justice League in the shadows of the Watchtower. However, those refugees are accused of being criminals. There are rebels who want to bring those criminals to justice as well as gain the knowledge the Watchtower offers. There is also LexCorp who has allied with the Red Lion’s government forces. Superman describes the Red Lion as “a lunatic who’s engaged in ethnic cleansing — slaughtering thousands along a warped path to peace.”

It’s a complex political situation that reflects a number of current ongoing political discussions in the United States and across the world. Christopher Priest handles it masterfully offering up a number of differing view points without favoring one or shoving a specific view down your throat.

In fact, in one of the best lines of the comic, Superman makes a very strong pro-gun argument. In response to The Flash taking the guns away from the Red Lion’s LexCorp forces and saying, “I don’t think we have much choice — gotta stop this!” Superman responds, “Which will accomplish what, Flash –? Take their guns away, they’ll fight with machetes–knives–rocks.” And then maybe the best line of the entire comic, “I am here to help mankind…not decide for them.” 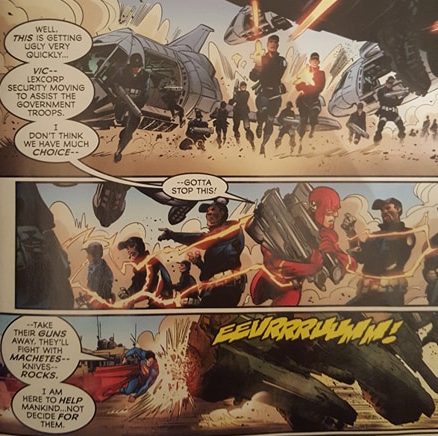 Now, I do want to preface this with what happens earlier in the comic. Superman actually has The Flash confiscate the rebel fighters’ guns because they encroached too close within the proximity of the Watchtower which the Justice League had turned into a demilitarized zone.

It’s an interesting look as you get one character offering two different view points within the span of the same comic book.

What do you make of Superman’s decisions and actions?