Perez had previously wished Diversity & Comics had been blown up by an IED.

She’s taking the threats of violence to a whole other level now. However, she had to switch to a backup Twitter account after her previous account was banned.

Perez’s original account was banned after she accused Meyer of domestic abuse and being dishonorably discharged from the military. One Angry Gamer provides a succinct explanation of those events.

Meyer responded to the accusations in a video:

The newest tweets of violence are from January and February of this year from Perez’s back-up Twitter account. She threatens to make Richard C. Meyer a quadriplegic which means she is threatening to physically paralyze him by giving him a spinal cord injury. 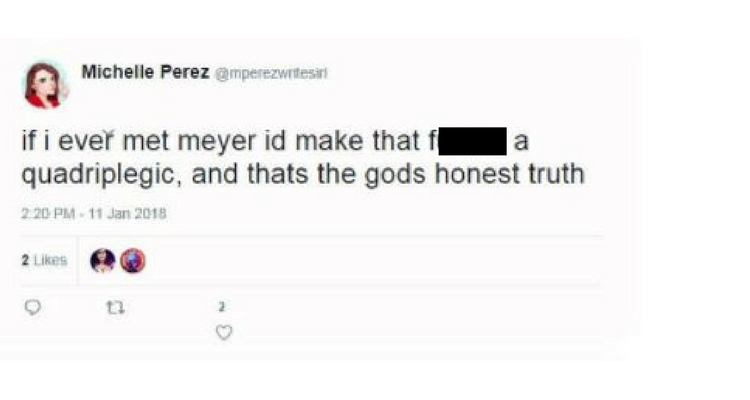 She doesn’t stop there. She claims she will snap his “neck like it was nothing.”

Perez claims these tweets were not done by her. “I didn’t make the tweets about physical threats to meyer.” She has subsequently deleted them.

didn’t start two factor authentication until recently. i didnt make the tweets about physical threats to meyer. funny enough, the main site that everyone keeps citing my Evil Tweets at is a stalker site that almost exclusively goes after trans women lately. anyway, deleted tweets

Diversity and Comics wasn’t buying her explanation about her Twitter being hacked.

You’ve got to be effing kidding me.

Someone “hacked” your Twitter and then wrote things that completely match speak patterns, your months long obsession, and your escalation of threats/slander/defamation.

OK, Michelle Perez. We ALL believe you. pic.twitter.com/eLFucps7GM

Sneaky hackers decided to hack Michelle on his first trip back to the alt account in 6 months. pic.twitter.com/aL71odm6rm

Others backed Diversity & Comics saying they will not purchase an Image Comics book until action is taken.

They better do something. I am not buying @ImageComics until this stops. They want to pander to 0.04% of the population at the expensive of decades of fans buying comics then that is what they will get.

Not good enough. Image needs to make a public statement.

If Perez is to be believed, Image Comics is fine with her behavior.

with that said. how about that. Image Comics is still Okay, and my book is still coming out. nothing changed: also Marvel’s Agents of Shield really got all of that budget money from Disney. jesus christ

When somebody says something I don’t like on YouTube–I don’t seek out an apology from YouTube. That may sound crazy–but it’s the way I live my life.

This type of behavior by Michelle Perez is absolutely unacceptable. While Image Comics has every right not to comment, the more they allow this behavior to go on, the more it looks like they are actually supporting this type of behavior and possibly even approving it. It’s not a good look for the Image Comics brand which manages a host of quality creator owned content like Seven to Eternity, Lazarus, The Walking Dead, and more.