Let the Past Die…

Zack Snyder is no longer the “golden boy” of the DCEU. Sure, many fans are still-clamoring for the non-existent Snyder-cut of Justice League. But the current state of DC Films is entirely his doing. Whether or not the director is aware of his public perception at the moment is unclear. He’s one of the most vocal users of a new social media app, Vero. He’s actually very approachable on the site. Many fans have had their questions answered by Snyder, a testament to his love of the fans if nothing else. So, when a fan asked about a certain Robin suit in Batman v Superman: Dawn of Justice, Snyder gave an answer that’s quite the surprise.

Batman-News first noticed the fan’s question. They asked if that was indeed Jason Todd who wore that suit. Snyder’s response was, “What makes you think that’s Jason Todd?” When another fan continues down that line of thinking, by implying that Bruce would take Dick Grayson’s death the hardest, Snyder agrees. Saying, “it would make Bruce even darker.” 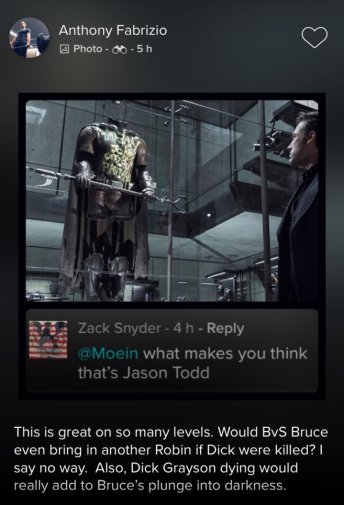 It’s not exactly a confirmation, but it heavily implies Dick Grayson is the dead Robin.

It’s about time to stop pretending that Zack Snyder was interested in adapting Batman and Superman comics to the big screen. Snyder is infamous for lifting some of the most iconic images in comic book history and putting them on film. But those moments never hold the significance they’re meant to have because of his superficial appreciation for visuals over substance. What else makes fans think he actually cares about this Universe and characters? 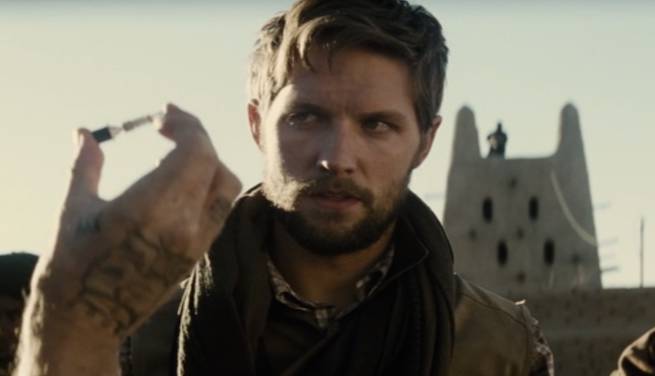 The sad truth of the DCEU is a foundation of horrible ideas and interpretations. The only truly faithful adaption of any of DC’s heroes is Diana and Clark near the end of Justice League. Otherwise every single interpretation of a DC hero has been meant to take the character in a different direction, rather than simply bringing a famous character to life in the way that Marvel has. Bruce Wayne had to be a murderous, rampaging drunk that doesn’t resemble any Batman comic. Oh and that dead Robin can’t be Jason Todd, the Robin whose entire arc revolves around his death. No, it has to be Dick Grayson because that makes Bruce more of a depressingly horrible person.

Snyder killed Jimmy Olsen off in Batman v Superman as a joke. He clearly didn’t regard Dick Grayson any higher than Jimmy. He was more than willing to kill off one of DC’s greatest heroes, as well as another potential franchise, just to make Bruce more of an asshole. There’s no appreciation for decades of source material, the characters, or their relationships. Just a wanton desire to make characters tense or aggravated. Not surprising when one realizes the emotional range of every DCEU film, except Wonder Woman, is mad to not-mad.

Now, it’s time to pick up the worthwhile pieces of the DC Extended Universe and move on.