Marvel Comics will launch a new Punisher series titled, The Punisher, which we can only assume is part of their Fresh Start Initiative. Matthew Rosenberg will remain the writer on the title, but he will be joined by Riccardo Burchielli on art. Guiu Vilanova previously collaborated on The Punisher with Rosenberg.

In an in-depth interview with Marvel.com, Matthew Rosenberg discussed what is coming up for Frank Castle after his time as War Machine during Marvel Legacy. In the most recent Punisher storyline, Nick Fury commissions Frank Castle to take down a criminal warlord. In order to help Frank achieve these goals he tasks him with stealing a War Machine suit. Frank easily acquires the suit and then proceeds to carry out the mission on his terms. In fact, Fury even tries to recall him, Frank carries out the mission sowing massive destruction throughout the foreign country. But he gets the job done. However, the War Machine armor is destroyed in Frank’s final fight before he returns home to New York.

Rosenberg discusses how the new series will continue Frank’s story:

“We’re going to get back to Frank Castle with a handgun and a knife, stalking the streets of New York, and getting his hands dirty. But we’re also going to see a man who has changed from his time in the armor. He developed a taste for bigger game and larger targets, and he’s not going to give that up easily. So in a sense it’s back to basics — but on a bigger scale.”

As for what Frank learned from his time with the War Machine armor, Rosenberg elaborates:

“He’s been able to do real damage, cause real change, in ways he’s not used to. They used to say that when a shark attacked a human they had to be hunted down because once they’d developed a taste for it they’d never stop. That’s Frank. He’s back on the streets, but he has a taste for the bigger game and he isn’t going to stop until he puts them in the ground — or they put him in it.”

Now you’re thinking what kind of bigger game could Punisher be hunting. He did just kill a world leader and overthrow an entire government. Rosenberg was pretty tight lipped:

“I can’t say too much, but I can say that issue #1 has some of the biggest bad guys in the Marvel Universe pop in. And that Frank still has his eyes on shaping nations these days. The classic Marvel villains are getting savvier. They aren’t thugs and gangsters anymore. They’re becoming mayors and CEOs and kings. But Frank is still coming for them.” 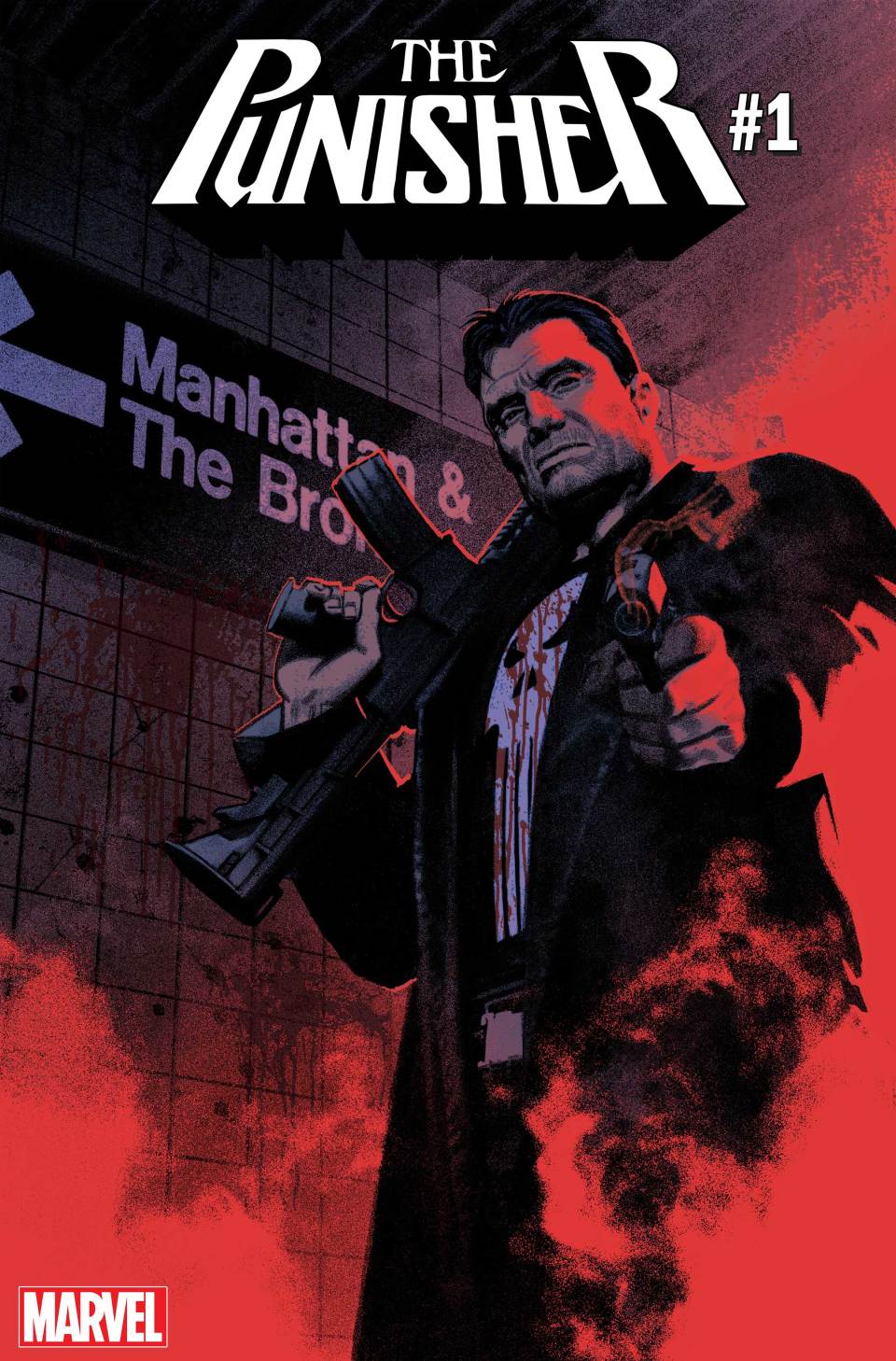 Rosenberg also discussed other Marvel heroes that might show up in the new series.

“Frank and the capes will most definitely be touched upon. More than touched upon. With Secret Empire, the War Machine armor, and what he has coming up, he has made himself something that means they can’t just look the other way. And he knows that. He’s operating in cape spaces these days, and he knows that puts a target on his back. But he also knows he’s willing to do what they won’t — and that gives him an advantage over the capes on most days.”

That should make for some interesting storylines. We know that Castle isn’t afraid to go toe to toe with the likes of well-known heroes. But his focus has always been the criminal element instead. I wouldn’t be surprised if we see him come face to face with Daredevil or Spider-Man in the near future.

Finally, you have to ask about the art. Marvel asks Rosenberg about Riccardo Burchielli and how his lack of previous Marvel work might affect the comic.

I am so excited to work with Riccardo. I am a huge DMZ fan, and his work on that book is really unparalleled. The sense of detail he brings to a city, to a war zone — and to the people in both — is breathtaking. I think those who aren’t familiar with his work are going to be absolutely shocked. There is just this sense of the world he conveys, this realism, that is so captivating. You can feel the buildings rise up around you and the bullets fly past your head. It’s going to be a real treat watching him drag all of us down into Frank Castle’s world.

You can grab The Punisher #1 by Mattew Rosenberg and Riccardo Burchielle on August 1st.