Joe Manganiello was one of the most exciting parts of Justice League. He was only in it briefly, but his Deathstroke already looks perfect. Enough to warrant his very own film from The Raid director Gareth Evans. Something fans have been eagerly waiting for since his presence in The Batman is no longer a sure thing. Well, it sounds like some of his The Batman research is going to pay off, after all.

The folks over at LRM Online pointed out an interview Chris Hardwick recently did on his ID10T podcast with the former True Blood actor. Obviously, the conversation found its way to Deathstroke.

“This is a real opportunity to figure out who this guy is on the inside. Like what he’s battling with…There are villains who are the people who are opposing them but from the inside this is a person who is struggling with all types of things. I think it’s really interesting to tell that kind of a story and tell the truth emotionally of a story like that when you’re talking about a man who lost an eye, was betrayed, lost a son. These different types of aspects.

Then you couple that with real world military training. Then I started training at like a Ninjutsu dojo and started learning sword fighting. Started learning and understanding where those techniques come from. All the sudden this thing starts writing itself.”

That might just be the coolest research anyone has ever had to do for a role. Manganiello is the best actor to bring Slade Wilson to life. He’s researching every aspect of the character from his lost eye to his lost children. Not many actors would think to put this much thought and care into a superhero…or villain.  But he isn’t just interested in the physical and emotional aspects of the character. The actor was actually pitching Deathstroke stories and plots to the studio!

In the Eye of the Beholder 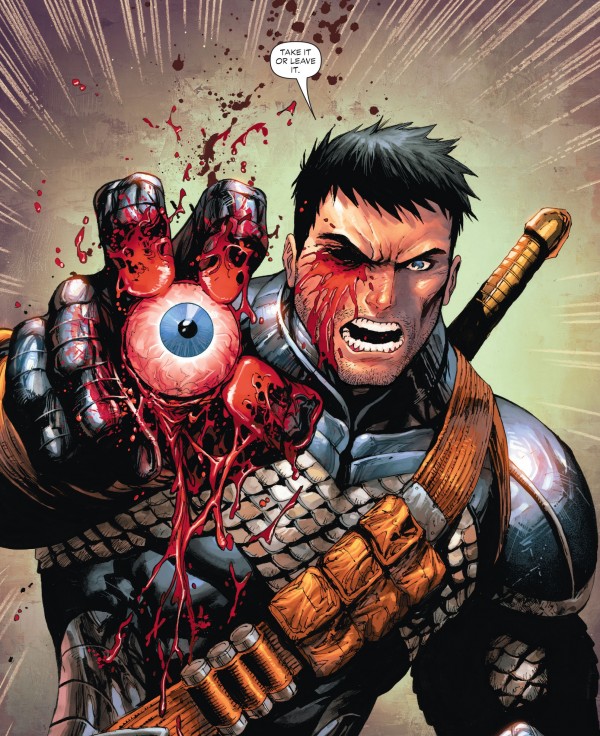 Joe Manganiello wasn’t just preparing for the physical conditions necessary to play the character, he was pitching stories! Not many actors are interested in cultivating the stories themselves. They’re just interested in playing the role. But once again, Manganiello is going above and beyond to truly become the most dangerous mercenary in the DC Universe.

Somewhere along that way I know that it was announced where the studio… there was talks with Gareth Evans and talks about an origin movie. I’m not giving news. I spent six months prior to all of those phone calls writing a backstory that was turned into sixteen pages which got turned into a treatment which then led to my Skype call with Gareth.”

Sixteen pages of a backstory is no small feat. It sounds like Manganiello worked tirelessly to form the perfect version of the character. Enough to start having conversations with the director of the film.

“I’m not giving news,” is an important part of the quote. It means that Manganiello is saying this isn’t an announcement, just a minor update.

Still, its more than enough to get anyone excited for Deathstroke‘s upcoming film.