Everyone knew it was going to hurt. Quite a few heroes were expected to kick the bucket in Avengers: Infinity War, but Marvel still managed to surprise us.

The death toll was HUGE; the price for the Infinity Gauntlet was costly. Thanos got his wish and vaporized half of the known Universe in an instant. Though some lives were lost long before that.

There are going to be two categories when talking about the deaths in Infinity War. The first of which have to do with those that were lost before “the snap.”

Loki, Heimdall, and seemingly all of the Asgardians are lost in the first battle against Thanos. Korg, Valkyrie, and many other Ragnarok sidekicks were nowhere to be found. Hopefully, Marvel gets the chance to write them back in later. Nevertheless, Heimdall’s last act is to Rainbow Road the Hulk back to Earth, saving him. Otherwise, Thor is the only known survivor of that first encounter.

Vision and Gamora are also lost for the sake of Infinity Stones. Actually, both are literally killed by Thanos for both the Mind and Soul Stones, respectively.

Earth wasn’t the only one to take some losses. Every one of Thanos’ Black Order was put down by the Avengers. In fact, they didn’t make quite as much noise as most expected. One of the film’s disappointments.

Now, what separates these deaths from those we’re about to talk about? Well, these deaths are probably real. When Thanos wipes out half the Universe, it gives off the impression that he only did so temporarily. That soon enough the world will be set right and those lost to “the snap” will make a return. The same probably won’t be said for any of the above names. These are the real losses. 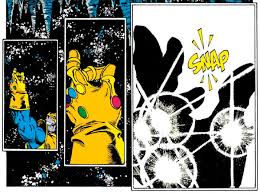 The Snap in “The Infinity Gauntlet” – Marvel Comics

Then it happened. Thanos managed to do it. He filled the Infinity Gauntlet with the Infinity Stones and snapped his fingers. The process was slow. At first, he disappeared, laughing in the face of Thor for having missed his mark by a head. Then came the losses.

Captain America turns to see a confused Bucky Barnes disappear into thin air. The first of many to suddenly become ash. Throughout the Universe many superheroes were lost. Dr. Strange, Black Panther, Sam Wilson, Drax, Groot, Mantis, Star-Lord, Spider-Man, Scarlet Witch, Maria Hill, and Nick Fury all turned to ash in the blink of an eye. In case you didn’t notice, that pretty much left the original Avengers all to themselves. Plus a few new teammates. The differences between these two groups of casualties, is that one gets the impression these losses are temporary.

There’s a lot of pain and grief to be found in this film, but if anyone thinks that Marvel just wiped out half of their franchises in an instant they need to do some thinking. This is Disney. They know the money is in keeping these characters around, even if they like a cliff hanger now and then.

When Tony said, “if we can’t protect the world you can be damn sure we’ll avenge it,” he probably meant it. Now he and his original teammates are going to have to make good on that promise. One of the final shots in the film is Captain America with a look of pure disbelief on his face. One of many Marvel heroes suddenly facing the realization of just how badly they lost the Infinity War. The losses were many; the pain was real. Just like Marvel promised.