Tim Doyle, who runs Nakatomi Incorporated, a company that sells art prints, T-shirts, comics, and more has seemingly made it his personal mission to attack Diversity & Comics and Ethan Van Sciver.

Doyle was one of the key instigators in attempting to get Ethan Van Sciver fired from DC Comics alongside CBR writer Kieran Shiach. He called Van Sciver a “legit homophobic Nazi or is pretending to be one.”

Comic artist Ethan Van Sciver is either a legit homophobic Nazi or is pretending to be one. Either way, I’m no longer supporting him. pic.twitter.com/SBrZwZghXN

He would add, “Yup. I never want him to work in heroes again. Go sack groceries, you’re done, Ethan.”

Since his efforts to get Ethan Van Sciver fired completely failed, he has moved onto Diversity & Comics aka Richard Meyer. Meyer is currently running an IndieGoGo campaign for his upcoming graphic novel Jawbreakers – Lost Souls with artist Jon Malin and colorist Brett R. Smith. The campaign has been a wild success with 3,344 backers raising $119,140 as of this writing.

However, the success of the campaign seems to have upset Tim Doyle. He went on a nasty rant on Twitter where he called Meyer a “bigot.” He also used misleading evidence in order to push his own narrative of the situation. Doyle has since deleted his Tweets, but you can see them below. 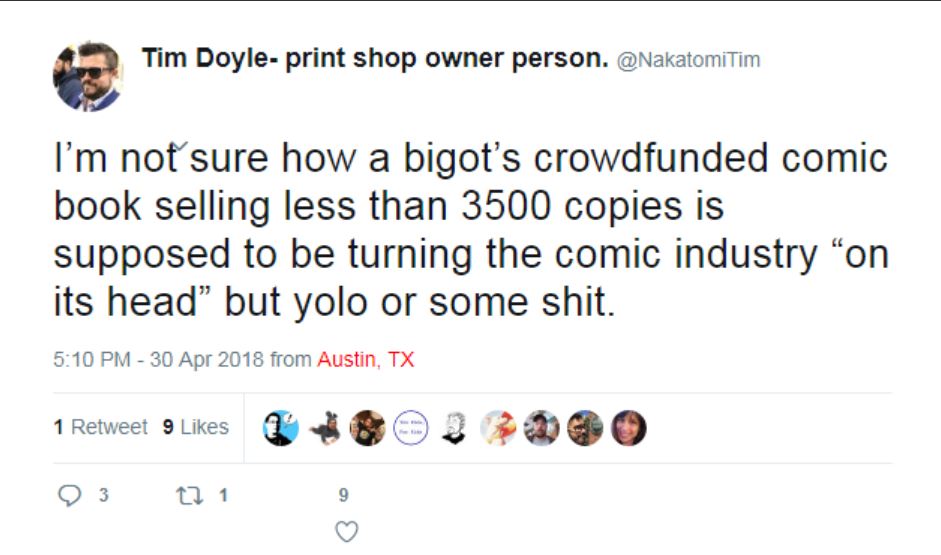 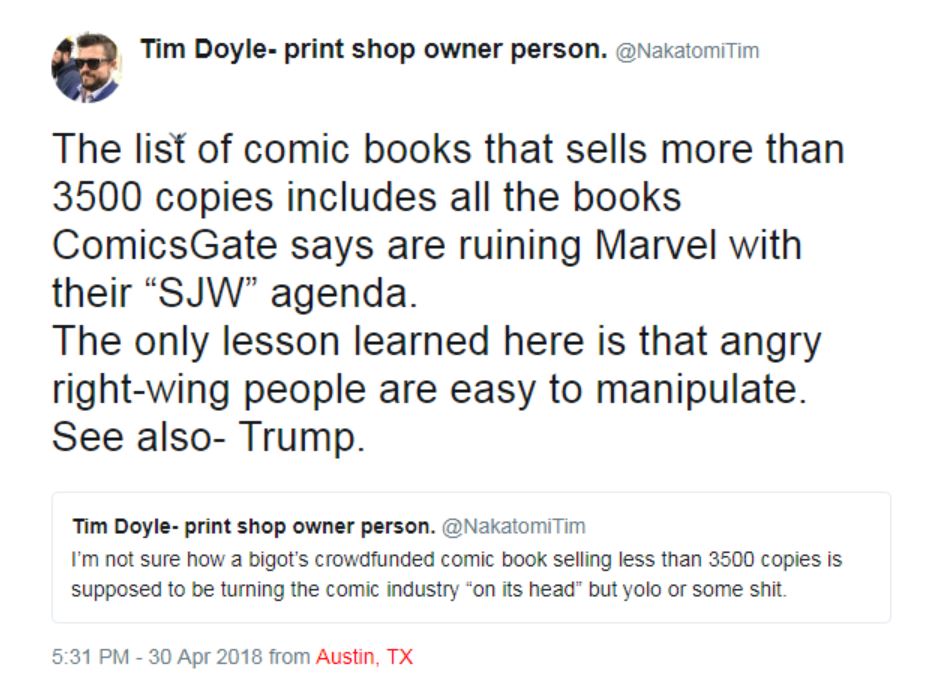 The biggest error is Doyle doesn’t understand the difference between a comic book and a graphic novel. A comic book is a single issue which usually contains somewhere around 22 or so pages of artwork and story. A graphic novel is usually upwards of 50 or so pages. The two types of media are tracked differently because they are fundamentally different. Interestingly enough, even if Jawbreakers – Lost Souls was classified as a comic book it would still be one of the top 350 comic books from last month based off of copies shipped. It would beat out books like Assassins Creed Origins #1, DC Comics’ Ruff & Reddy Show #6, and IDW’s Assassinistas #3.

However, if you actually look at graphic novel sales for March you will see that the book is actually in the Top 4 sold from March. The only other graphic novels ahead of it would be Walking Dead Vol. 29, Green Lantern Earth One, and Flash Vol. 5.

1. Tim Doyle @nakatomitim had a chance to call me a bigot to my face, but he chickened out (chicken-boned out?)

2. JAWBREAKERS- LOST SOULS is a graphic novel…not a comic book. And it is currently the 4th best-selling graphic novel in the country. pic.twitter.com/CeU9ly1tEK

But Tim Doyle didn’t stop there. He confessed that he looked up Richard Meyer’s public court documents and accused him of being late on his child support.

Tim Doyle is going to local court to look up my child support payments?

By the way, I’m caught up. Friggin PSYCHO pic.twitter.com/84EvQ4QTqA

Meyer would call him out and explain he’s ahead on his child support payments.

1. Don’t be so sure about that.
2. Though legal to check my court records, it is EXTREMELY obsessive and abnormal. I’m not running for office.
3. I’m actually ahead on my child support, with a credit. Thanks for asking. PSYCHO. pic.twitter.com/wMM4emRbcW

To prove his point Meyer posted a document confirming he was ahead on his child support.

Tim Doyle accused me of being behind on my child support when I actually have a credit of paying ahead by almost $2,000. Looking for references for lawyers in the Austin area. pic.twitter.com/5KD9aDoVNB

Meyer would then go on to inform his followers he would be calling the police and talked about getting a restraining order against Tim Doyle.

Yeah, calling police in the morning. This is restraining order worthy shit. https://t.co/NuP37LBO54

Yes, but I got the screenshots. This is so far beyond acceptable it’s not even funny. Escalating tomorrow. https://t.co/eWRAcQDmKE

We’ll see what the police and lawyers say tomorrow. https://t.co/tTs1dURcox

Doyle would leave an ominous message which many saw as threatening towards Meyer.

This is stalking and harassment. Imagine hating @DiversityAndCmx so much that you look up his private court records in an attempt to make his life miserable. pic.twitter.com/jer8g1gF3P

When it comes to people’s private lives and relationships with their children, partners, ex-partners, etc…. it’s just off limits. Doesn’t matter what they claim to want – this is sick, evil, & truly disturbing. This is beyond anything I’ve seen before from these sick fucks.

Doyle would then delete the aforementioned Tweets.

He never showed anything. Just made defamatory claims that I easily disproved. Then said he was glad he did it. Then deleted everything he tweeted about me today. https://t.co/Pg5YfdkN0j

However, he would send Meyer an email which reads:

“Richard-
Any further communication from you will have to go through my lawyer, Brooks Rice, and he will advise me on how to proceed. He is CC’d here.

I’ve endured months of you attacking and harassing me and my business online, on Twitter and on videos you have made about me on Youtube. Your followers on Twitter and Youtube have followeed your lead and have done the same.

I did not name you anywhere online tonight, and yet you threatened legal action on me.

The wisest thing here to avoid any legal expanses for you or me is just to take a breather, and walk away. I’ll not name or comment on anything you say or do, publicly, and you’ll do the same, going forward, indefintely.
I think it would be best for both of us.

You’re the one with a publicly known criminal record that includes stalking and harassment, and a long trail of harassing me online.

We both got kids to take care of. If you’ve got custody, then you’ve got precious time and money to deal with this.

And please, for the love of god, stop posting your personal records online.

Take care of those kids.

You know you’re innocent when you have to delete every tweet you’ve made about a person and then include your lawyer in the response email. pic.twitter.com/pLBvCpOLuh

I told the story in a few videos.
1999
ASSAULT- Kicking a guy’s ass
STALKING- Going to his house to kick his ass
HARASSMENT x 2- Calling him on the phone twice to tell him I would kick his ass

All got dismissed to a simple Disorderly Conduct. Enlisted 6 months after the hearing. https://t.co/mg2HZhYMDx

However, what’s really interesting about this email is that Doyle is claiming he didn’t specifically name Diversity & Comics in his now deleted Tweets. However, it’s pretty obvious who he is referring to. For his part Diversity & Comics called him out on the deceptive tactic.

I guess there’s another Austin-area person with a crowdfunding campaign with around 3500 backers right now and 3 kids.

Everyone here knew he was implying it was me. pic.twitter.com/WLIpAeMout

There’s also a lot of veiled threats in the letter. What really stood out is his attempts to control Meyer’s behavior after he threatened legal action against him. He wants Meyer to keep his mouth shut moving forward in exchange for not saying anything disparaging towards Meyer. However, we’ve already seen other actors take up Doyle’s false accusations against Ethan Van Sciver. It wouldn’t surprise me if he used a proxy to do the same here.

But maybe the most sinister part of the letter is the veiled threat against Meyer’s kids. He ends his letter writing, “Take care of those kids.” This all comes after he hunted down Meyer’s public record and accused him of being late on his child support payments, an accusation which was proven false by Meyer.

That’s extremely disturbing and a line that shouldn’t be crossed.

And as one Twitter user pointed out, going through court documents is not an easy process.

Dude, I go through court documents for lawyers as part of my living. It’s not an easy process. This guy really had to put some work into this. Don’t let anyone tell you to take this lightly.

Tim Doyle has definitely crossed a line. I hope Meyer ensures his and his children’s safety and takes all necessary precautions against Tim Doyle. You just don’t make veiled threats against someone’s children.