“As Alfred would say, step out of your comfort zone a bit.”

Three separate stories make up the pages of DC Nation #0. But these three stories are rather important. They predict the future! Because these stories are meant to show readers what the near future of DC Comics is going to look like. Planning for a wedding, planning for a merger, and planning for the end of the Universe all seem like daunting tasks. Yet that is what each of the team or characters are faced with in these issues. Tom King, Brian Michael Bendis, Scott Snyder, James Tynion IV, and Joshua Williamson have all written an incredible invitation to DC Comics. 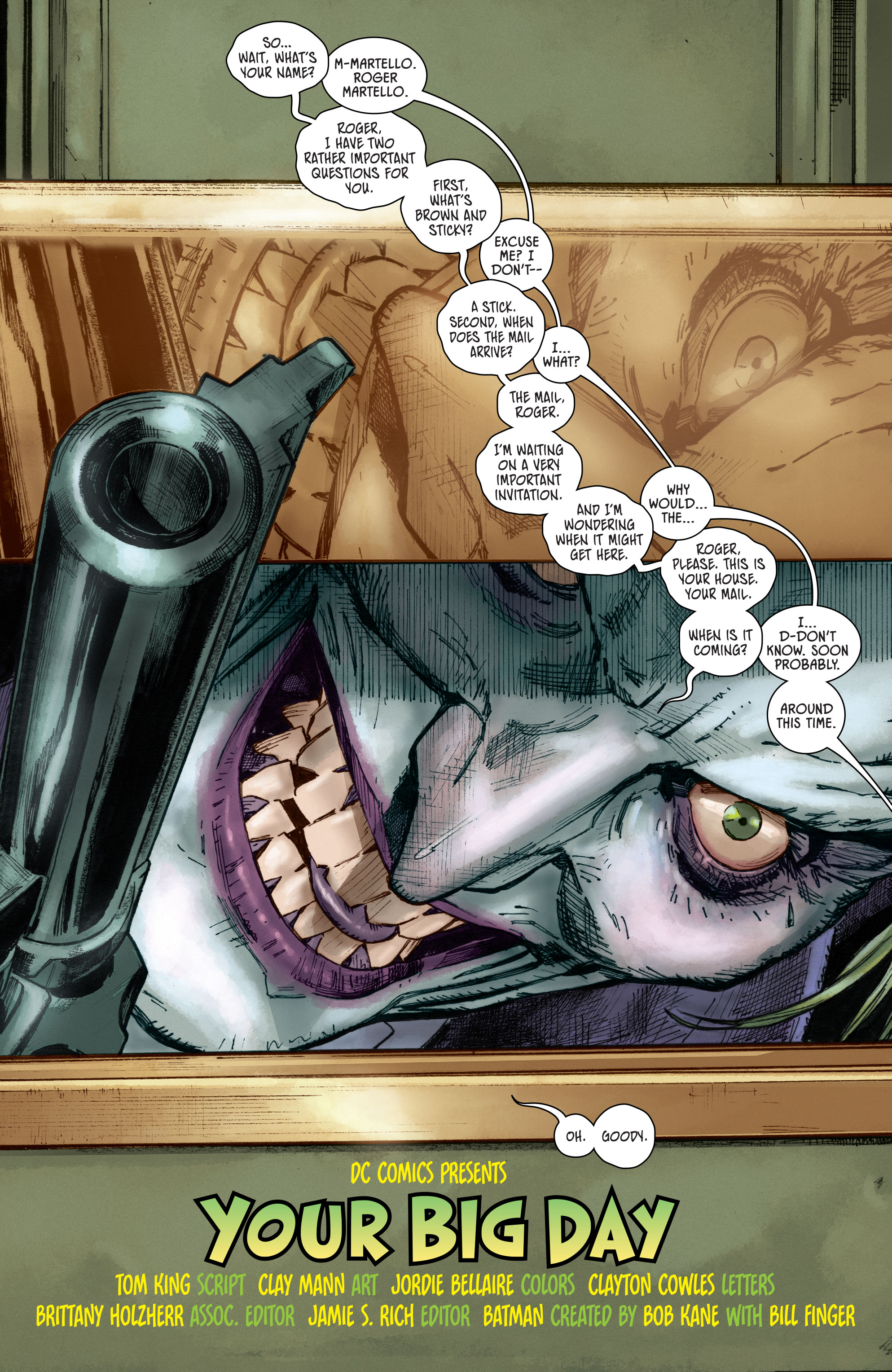 Batman and Superman are the centers of almost every story. The Joker is awaiting his invitation, the Daily Planet has a new writer, and the Multiverse is all out of whack. These are the issues the world’s greatest superheroes are faced with. There are no big changes to be found. There aren’t any major announcements that readers aren’t prepared for. DC delivered a great comic that shows a lot of promise with excellent art and writing.

For only a quarter, what more could you want?

Perry White screams those words over the Daily Planet in the story Office Space. They’re meant to usher in change. To let the reader know about the new status quo. Yet, the words of Brian Michael Bendis don’t sound that strange at all. His Perry White sounds like Perry White; his Lois sounds like Lois. Anyone expecting Bendis to deliver anything but a solid interpretation of this world will be sorely disappointed. The same can be said for the other two entries.

“Your Big Day” stars the Joker. It’s a simple story, with only one setting and two characters. But Tom King manages to capture everything that makes the Joker so sinister. His Joker perfectly personifies the evil and anarchy he represents. His presence in DC Nation #0 is meant as a promise that the wedding of Bat and Cat will not go as planned. Yes, the Caped Crusader takes every precaution imaginable. But who knows what horrors he has planned. Just like the Superman story, this is just a tease of where the future of Batman will lead. 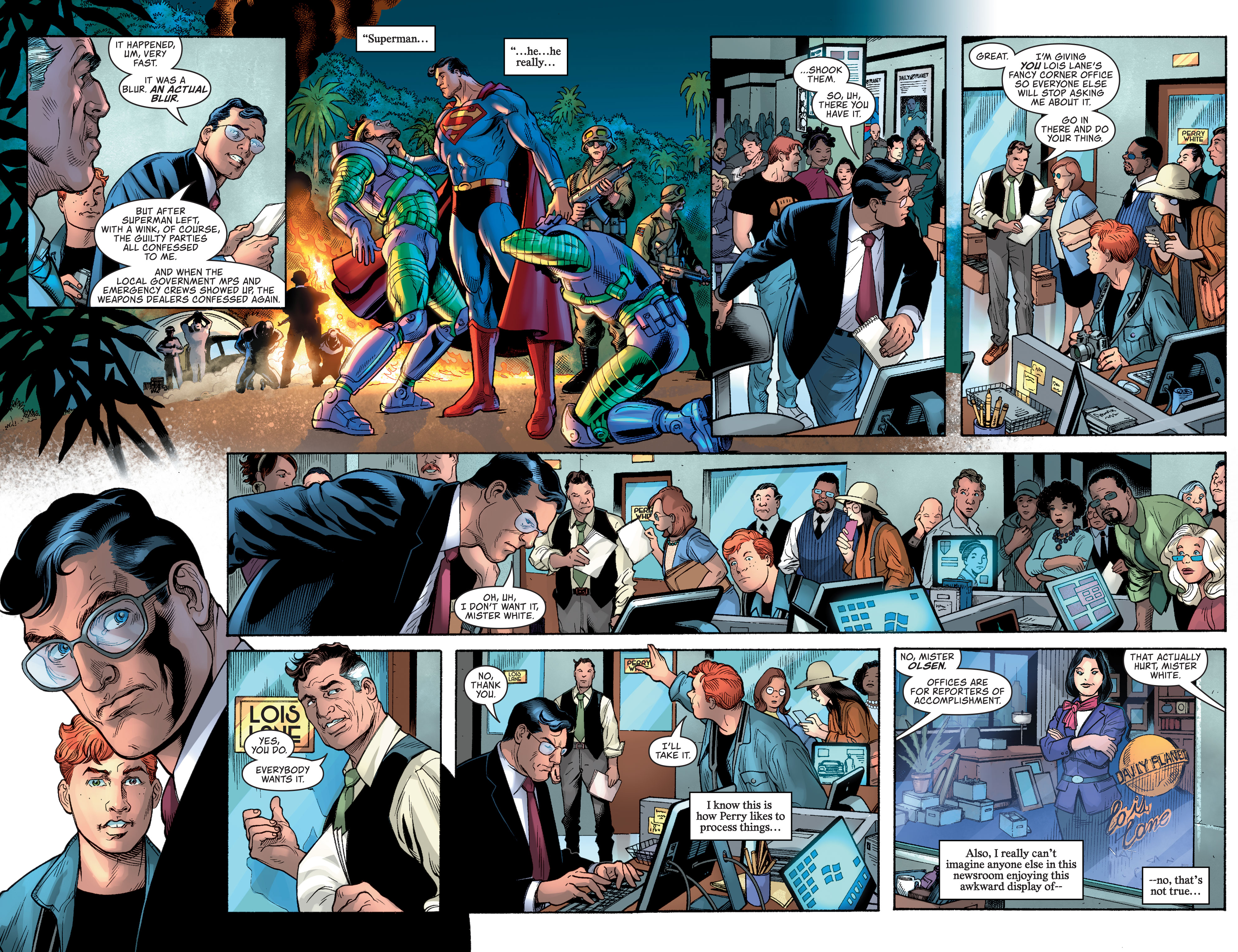 But the Justice League story may contain the biggest reveal of them all.

No Justice: Prelude is a haunting reminder that things aren’t so well with the DC Universe. Dark Knights: Metal led to the destruction of the Source Wall, and an influx of never-before-seen entities. It’s captivating, awesome, and it speaks volumes for the future of the Justice League. Establishing the separate teams that will help to right everything that has been wronged in the Universe. Every single Justice League Team is as exciting as the last. Clearly, the writers spent a good deal of time on creating these marvelous stories. And it shows.

“Aquaman said it best, our universe is like a fish bowl poured into the Ocean.”

The art for each tale in DC Nation #0 is just as beautiful as the last. Clay Mann, Jose Luis Garcia-Lopez, and Jorge Jimenez elevate each other’s work to make this one of the most beautiful issues on the shelves. Jimenez may have had the most daunting task of all, defining several Justice League’s in his Prelude to No Justice. The action is top notch and every character is utterly breathtaking. Lopez has just as much success with Superman. He takes an iconic world and gives it an old school and classic touch.

Clay Mann decided to go a little more demented with his approach. His Joker is not your typical clown Prince of Crime, his anatomy and crude detail makes him one of the more memorable parts of the issue. 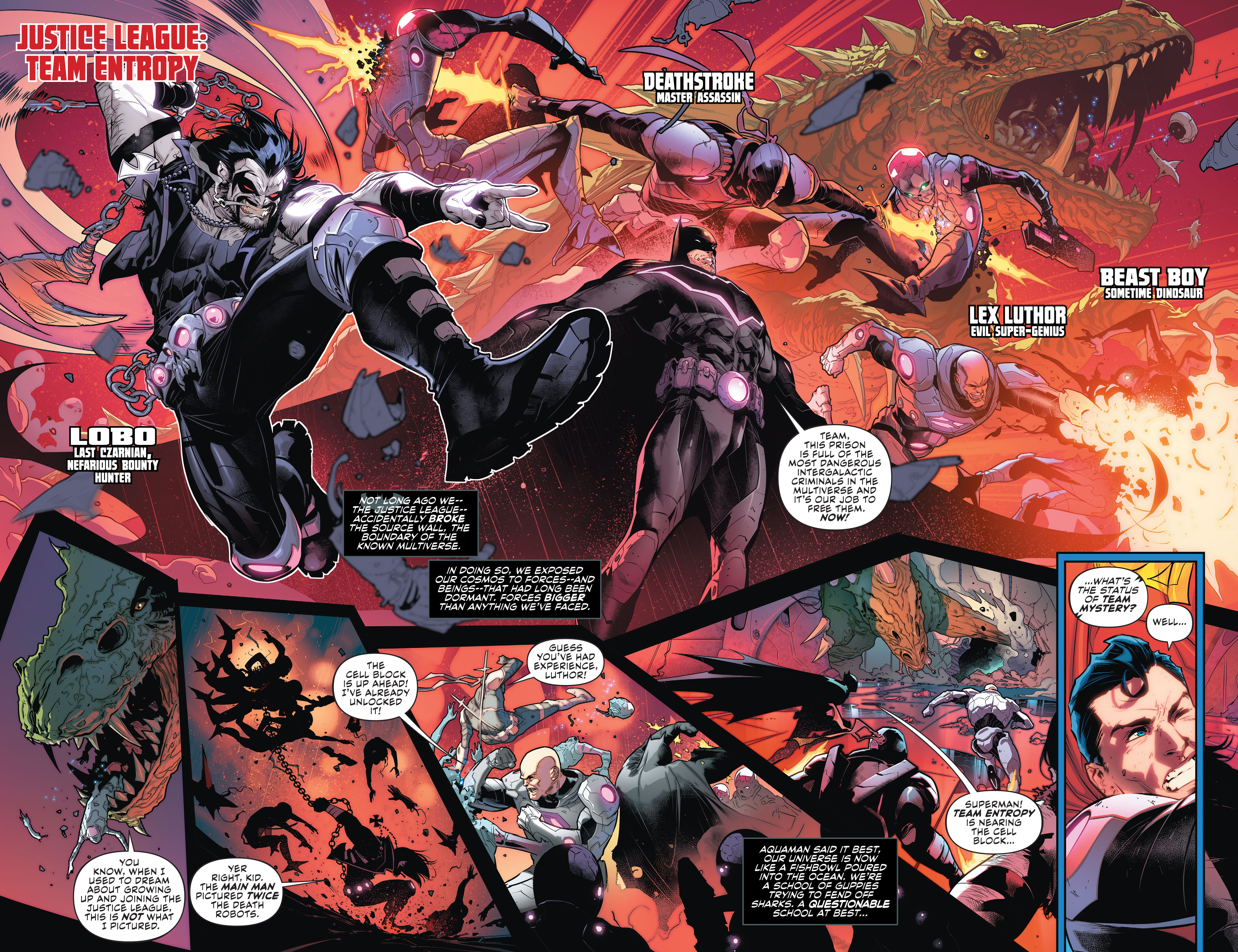 Overall, despite featuring many of the same characters none of these stories look the same. A testament to the wise choice the editors made with the art team. It makes DC Nation #0 worth every one of the 25 pennies it costs.

As the Joker patiently awaits his invitation to Batman’s Wedding, his victim squirms. “Just what is going to happen?,” the man clearly wonders. Every page is unexpected. Keeping the reader on their toes and excited about what’s to come. That’s the entire point of DC Nation #0. To get DC readers excited about the near future of their favorite comic book publisher. In that, DC Nation #0 succeeds as much as it possibly could. Were you unsure of several Justice League’s running around with different teammates? Read this issue. Were you unsure of whether or not Brian Michael Bendis would write a very different world for Superman? Read this issue.

Did you think the Joker wasn’t excited about Bat and Cat’s upcoming nuptials? Read this issue.

Don’t expect a full and lengthy tale that encompasses the future of the whole DC Universe. That’s so New 52. Instead, expect DC to promise you unique stories that don’t always conflict or connect to each other. Awesome and daring adventures for the characters you’ve grown up with. Sometimes the stories will remind you of the past; sometimes they will clearly represent the future.

Whatever way you look at it, this is everything DC has to offer. A clearly laid out representation of the stories and settings you can expect. Hopefully, each series can live up to the promise of DC Nation #0.