“I am the Immortal Man, Caden. I need your help.”

Now, that’s more like it. After a solid first issue, The Immortal Men have truly arrived. Caden Park has a problem. Quite a few interesting folks are after him. The Immortal Man and the Infinite Women are two powerful figures at the opposite ends of two philosophies. One wants the world to live, the other wants the world to die. It’s pretty simple. The Immortal Men #2 isn’t trying to be overly complex. The story is about Caden Park’s journey to becoming a superhero…probably. It’s taking a long time to get there. But the ride is fantastic and beautiful.

Finally, more is revealed about these well-designed characters! That’s where the book shines. The backstories are unique and fun, another small detail that helps the comic become more than a simple team-up. 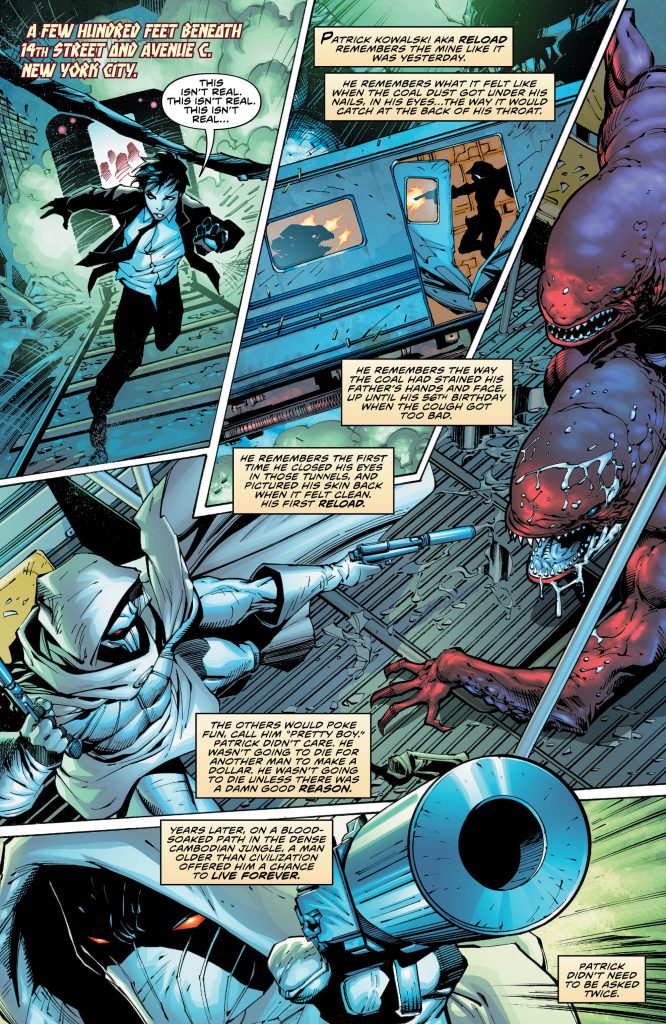 James Tynion IV is throwing this poor kid through the ringer, but he’s having a great time doing it. So is the reader. Awesome characters and settings get destroed in these pages. While Jim Lee is missed, Ryan Benjamin does a perfect job of emulating his style while still making the story his own. This is a great issue of a fun comic. Hopefully, the sales reflect that.

The exciting world of The Immortal Men #2 would make anyone breathless. Especially when you’ve faced as much tragedy and horror in the last couple hours as Caden Park. Thanks for the wonderful writing of James Tynion IV, he’s not having a great time. A bunch of weird people are after him, wanting him to take certain oaths or to just die. That’s a lot of tension and drama for the kid. But for the reader, it’s just plain fun. The story is exciting and the characters are very lively. Timber, Ghost Fist, Stray, and Reload are quite the team. It’s a testament to Tynion’s strength as a writer that this doesn’t feel like one of the new Justice Leagues. This feels like a brand new answer to a brand new threat, outside of the normal DC Universe. 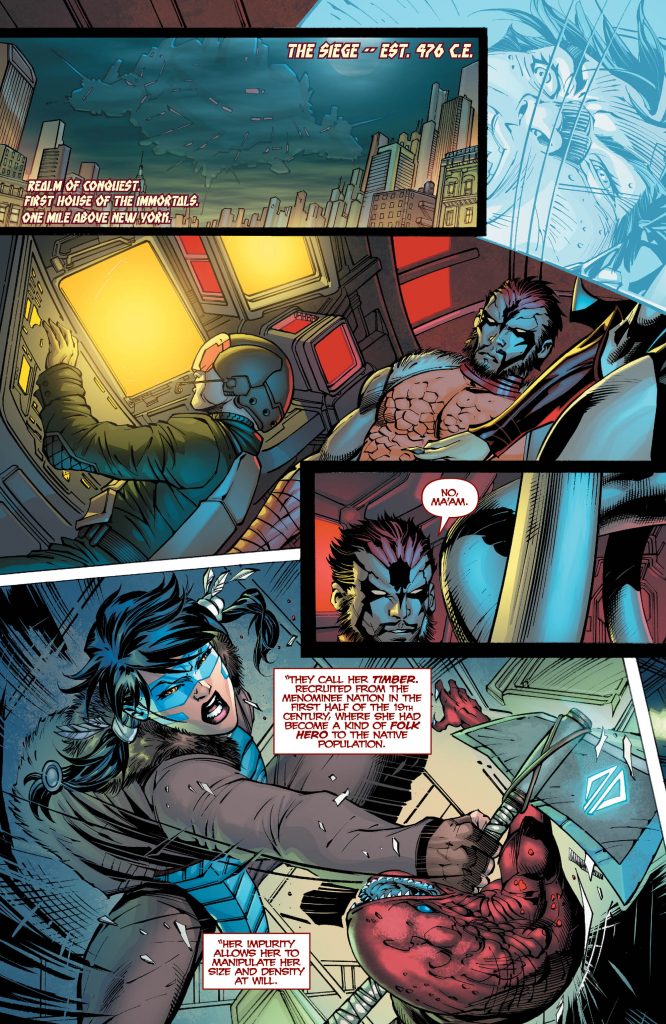 While the occasional reference to other DC heroes are there, it’s just to remind the reader where they are and why none of their favorite characters are showing up. This story is about selling the awesome unique power of The Immortal Men and their need to recruit Caden Park. While The Immortal Man has yet to make a a grand entrance in the story, it’s because Tynion is cleverly teasing us. He creates a sense of mystery that will even further build the excitement for The Immortal Men.

Considering the title of #3 is “Enter the Immortal Man,” one can only expect what will happen next…

“Something really weird is going on.”

Ryan Benjamin and inker Richard Friend take over the art for this issue. Whereas the first was a mix of Benjamin and Jim Lee, The Immortal Men #2 doesn’t necessarily suffer because of it. Benjamin’s art can lack detail at times, feeling as if there are some missing finishing touches. But otherwise, this is a beautiful issue. Most every character looks grand and captivating. The action is the most important aspect of the issue and that’s what works the most. The paneling makes the action fluid and alluring. Each of the characters is used to the best effect, with Benjamin making clever use of their powers and locations.

The settings are just as eye-catching thanks to the colors of David Baron. The art can occasionally be as simple as the story it’s depicting. Hopefully, Lee can return and make a reappearance on the art team. But otherwise, Benjamin did a great job bringing The Immortal Men #2 to life. An exciting trip along the underground and streets of a New York City.

The Immortal Men are going extinct just as their new series is starting! What a coincidence. All jokes aside, the premise is simple and exciting. Writer James Tynion IV gives the reader one kid to watch: Caden Park. Poor Caden has just been trying to live a normal life while these Immortal Men try to recruit him and the Infinite Woman tries to kill him. If only it wasn’t such a good read. Unfortunately for Park, it would seem things are getting a lot worse before they’re going to get better. The same can be said for the team he’s about to join.

The uniquely designed members are given backstories in this issue. Giving them names and detailing their powers helps to get to know this ragtag group of nobodies. Because now the reader knows just how awesome they are. Each of their powers brings something new to the table. There’s still plenty of mystery to be found, but that all lies with Caden Park and the Immortal Man. Now that the team’s been introduced, things can really get started.

Unfortunately, legend Jim Lee did not return for the art on this issue. Hopefully that changes by the next, but Ryan Benjamin did a great job of channeling his style. It may not feature as much detail as Lee puts into his careful lines, but the action is just as exciting. He takes advantage of the colorful characters Tynion gives him to help make The Immortal Men #2 even better than the previous issue. With how great it’s going so far, hopefully Caden Park’s journey is just getting started.