If you are unfamiliar with The Sandman, it was a comic book series written by prolific writer Neil Gaiman with art work by a bevy of artists including Sam Kieth, Mike Dringenberg, Jill Thompson, Shawn McManus, Marc Hempel, and Michael Zulli. The original series ran for 75 issues beginning in January 1989 and ending in March 1996. It told the story about Dream or Morpheus, the Lord of Dreams, and how he is captured.

Now, DC Comics and Vertigo are once again venturing into The Sandman Universe. This new imprint will be launched with The Sandman Universe #1 that will feature a story by Neil Gaiman and will be written by Si Spurrier, Nalo Hopkinson, Dan Waters, and Kat Howard. Bilquis Evely will provide the artwork with a cover by Jae Lee. 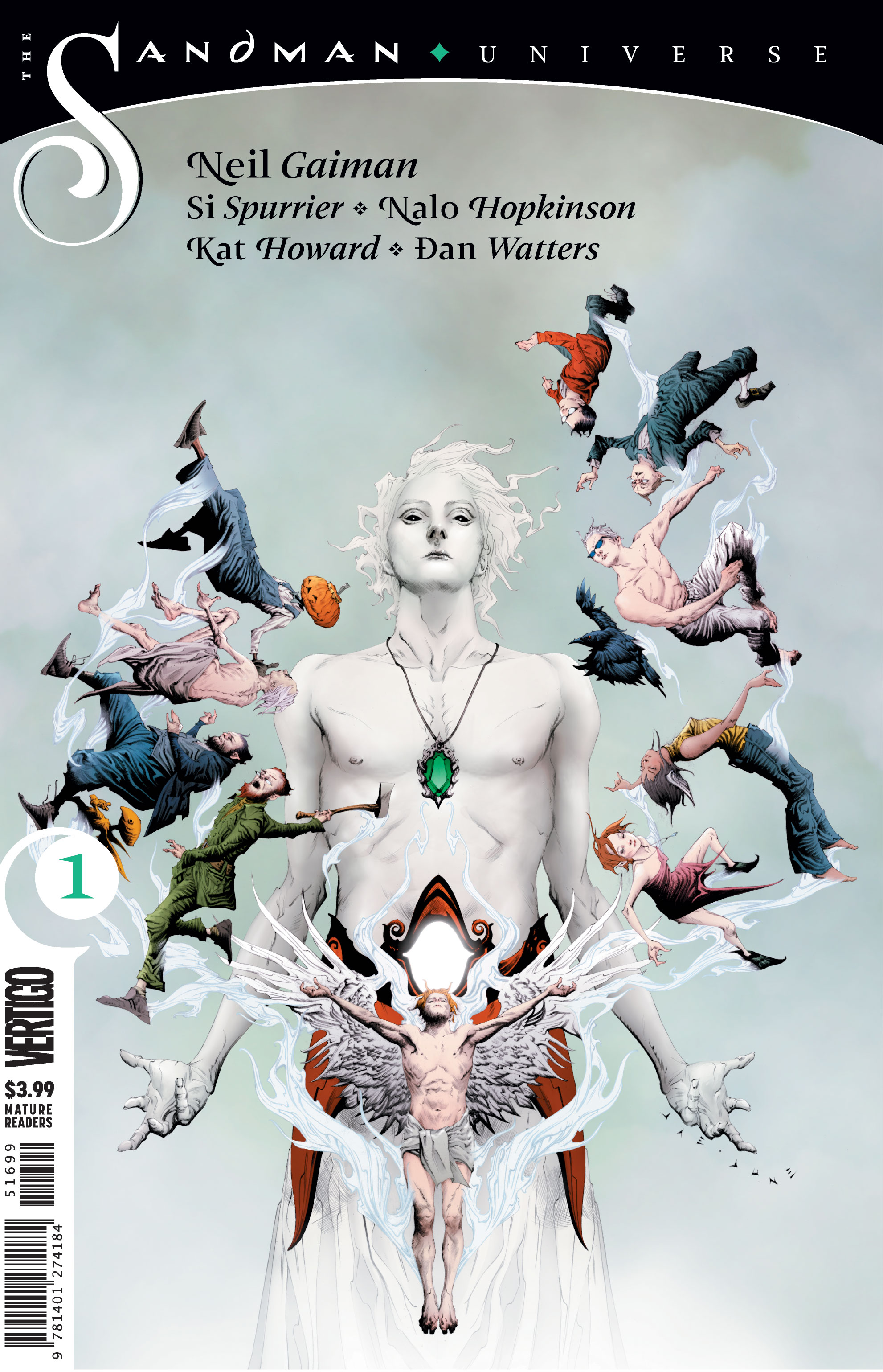 Here’s the official solicitation for The Sandman Universe #1:

Daniel, the lord of Dreams, has gone missing and it causes chaos in the kingdom of dreams…
A rift between worlds has opened, revealing a space beyond the Dreaming. Meanwhile, a book from Lucien’s library of all the unwritten books ever dreamed is discovered by a group of children in the waking world.
Simultaneously, a new House appears—the House of Whispers—joining the Houses of Secret and Mystery in the Dreaming. Its proprietor is a fortune teller called Erzulie, whom the inhabitants of the Dreaming suspect may be responsible for all the strange goings on.
Elsewhere, Lucifer has fallen again, only this time he might be in a Hell of his own design.
And in London, a young boy named Timothy Hunter sleeps, in his dreams he becomes the world’s most powerful magician, but in his nightmares, he becomes the world’s worst villain, which future will become reality?
From the mind of Neil Gaiman, a new world filled with dreams and nightmares, all of his wonderful characters living together in a shared universe for a story unlike anything we’ve ever seen before.

After The Sandman Universe #1, DC Comics and Vertigo will launch four new series, The Dreaming, House of Whispers, Lucifer, and Books of Magic. 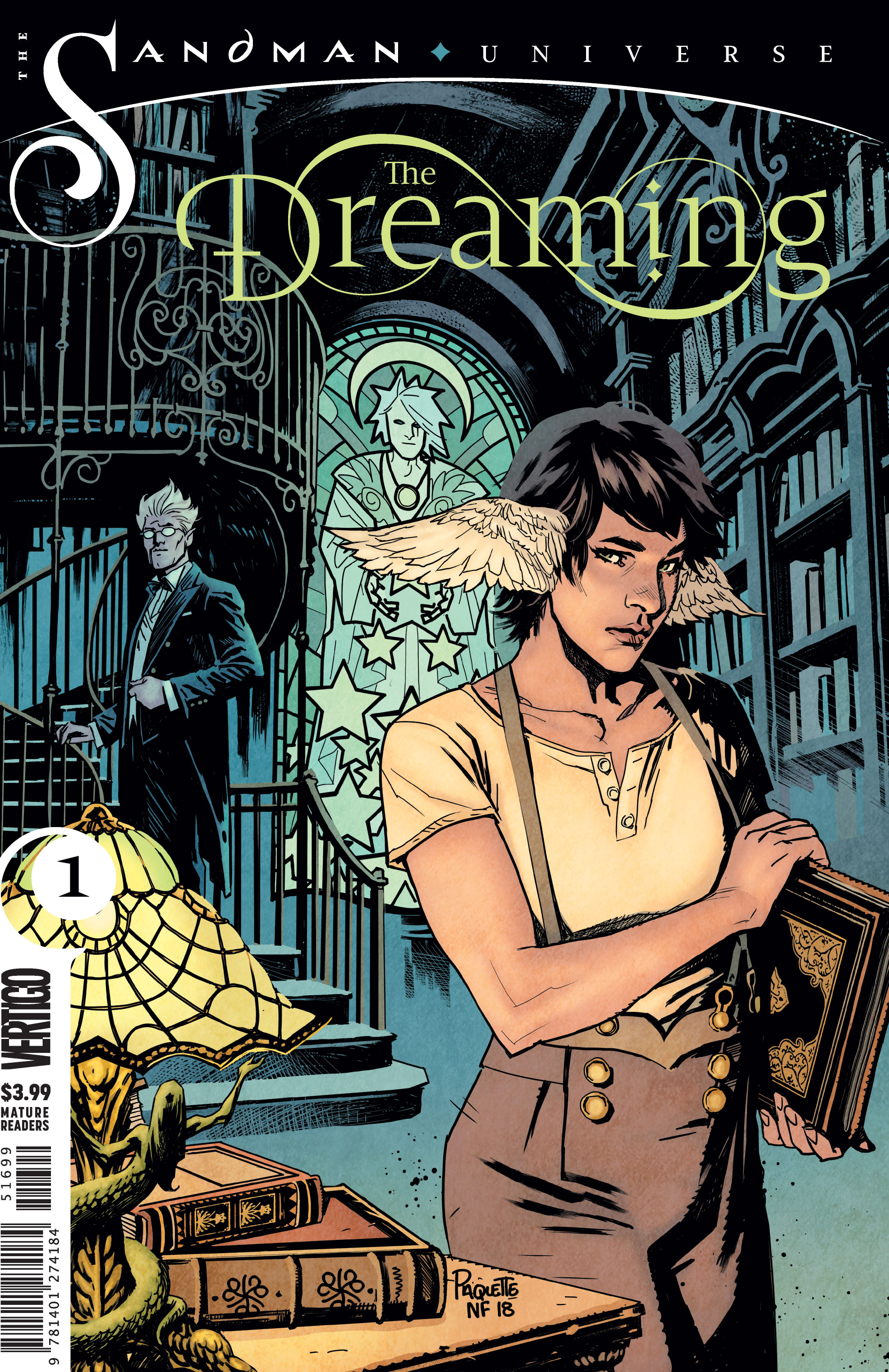 The Dreaming will be written by Si Spurrier with artist Bilquis Evely. Evely recently worked on Wonder Woman, and Image Comics’ Lazarus X+66.

There is a place where gods are born and stories are spun. But twenty-three years after he was anointed as its master, Dream of the Endless has inexplicably abandoned the dreaming. His absence triggers a series of crimes and calamities which consume the lives of those already tangled in his fate, among them Lucien the librarian, Nuala of Faerie, and Dora, a monstress without memories. But while they struggle to restore the King to his throne, they face from intrigues within and conquest from without. As usurpers circle the defenceless domain and an impossible shadow awaits its  own birth beside a rip in reality, the denizens of the dreaming play out their stories of loss and love, resignation and resistance. 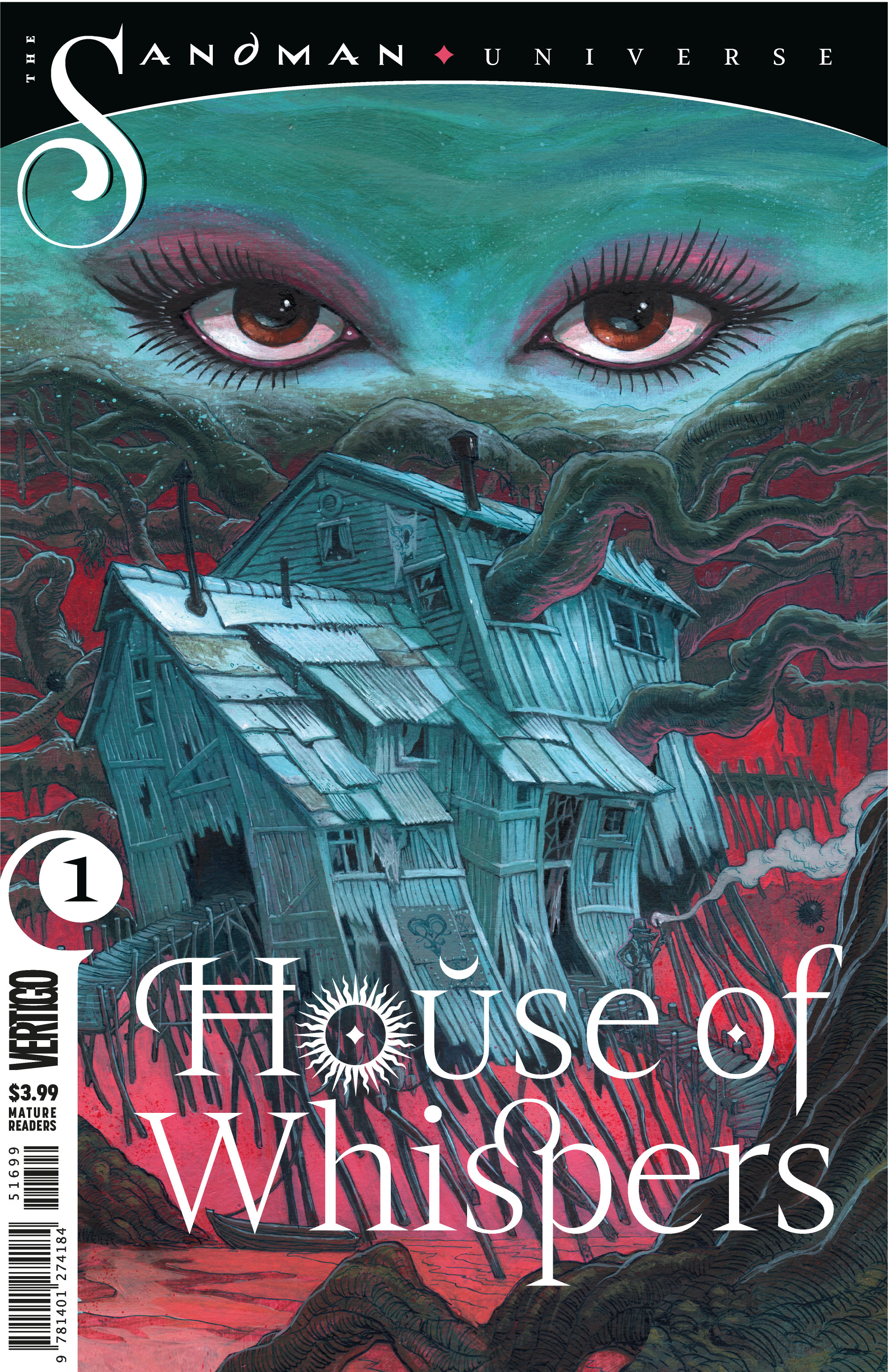 House of Whispers will be written by Nalo Hopkinson with art by Dominike “Domo” Stanton. Stanton is a graduate of DC Comics’ Artists Workshop and he’s worked on Moon Girl and Devil Dinosaur as well as Starbrand & Nightmask.

Latoya is in a coma. Her girlfriend enlists the help of Latoya’s two younger sisters. Using the Book of Whispers, they mistakenly steal the essence of Erzulie, a deity of voodoo mythology. The psychic blowback of the spell causes her house to crash into the Dreaming, beside the Houses of Secrets and Mystery and their custodians, Cain and Abel.
In the real world, the awakened young woman suffers a mystical form of Cotard’s Delusion —she believes she is already dead, and she’s transmitting her beliefs to others, causing
them to become guardians of the Gap that has appeared in the Dreaming. 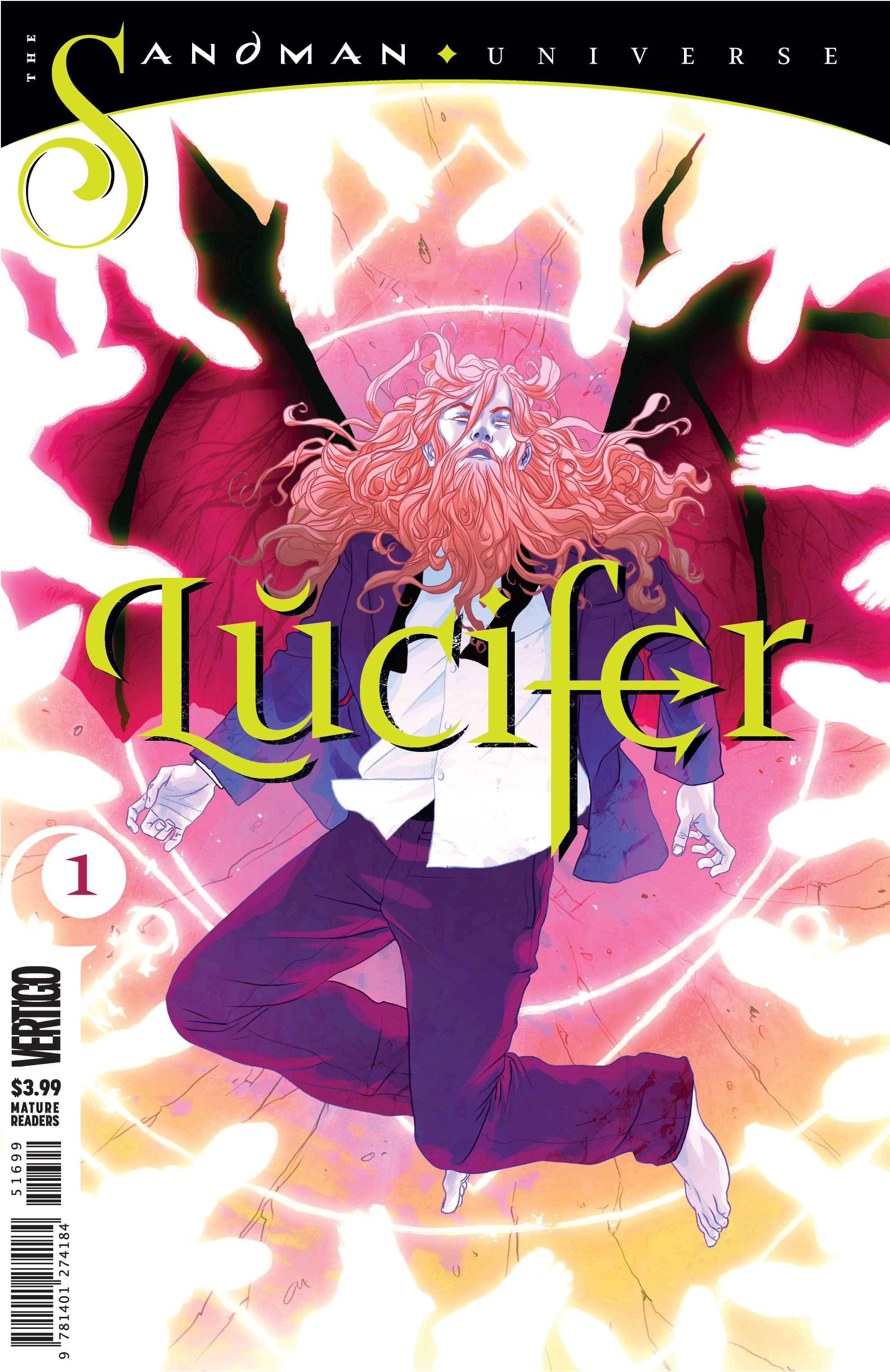 Lucifer will be written by Dan Watters with art by Max Fiumara and Sebastian Fiumara. Max and Sebastian collaborated on Dark Horse’s Abe Sapien. Max has also worked on The Amazing Spider-Man as well as the Black Hammer spinoff series Doctor Star & the Kingdom of Lost Tomorrows. Sebastian has worked on Marvel’s Loki as well as All-Star Batman.

A few years ago, the devil vanished. Some people say he died or simply ran away, while others believe he never existed at all. But we aren’t some people. No. This is the one true story of what happened to the Prince of Lies, the Bringer of Light—Lucifer, the blind, destitute old man, who lives in a small boarding house in a quiet little town, where nothing is quite what it seems and no one can leave. he’s trapped, you see? Trapped n a bizarre prison with no memory of how he got there or why. Meanwhile in Los Angeles, a policeman who may have brain cancer is tasked with a mission of divine importance: find and kill Lucifer. 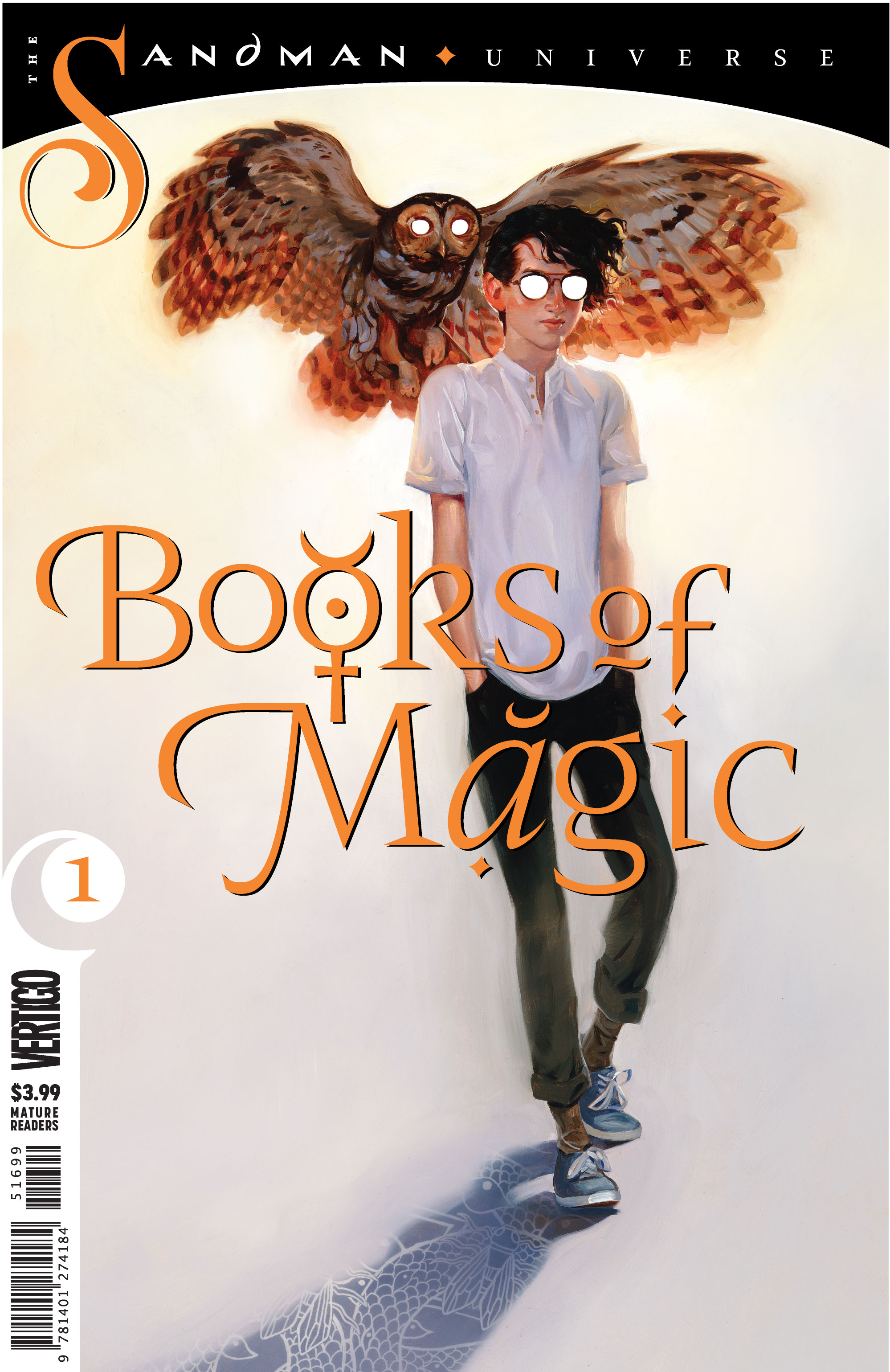 Books of Magic will be written by Kat Howard with art by Tom Fowler. Tom Fowler has worked on Venom, Hulk Season One, Quantum & Woody as well as Rick and Morty. He also provided inks on Doom Patrol.

Timothy Hunter is destined to become the most powerful magician in the universe, but that doesn’t mean he gets to cut class, skip exams, or is impervious to bullying by his mundane peers. After all, he’s still a London teenager and having magical abilities complicates things more than it helps. And while Tim’s trying to study and attract the cute girl in his class, there are cultists who want to kill him, believing his power will eventually corrupt him, turning him into a merciless mage. Luckily, the new substitute teacher for his school wants to mentor him and educate him in the magical arts so that he can discover the master behind the Books of Magic..