Aquaman hits theaters later this year with Jason Momoa leading a star-studded cast that brings many of DC’s greatest characters to life. One such task belongs to Yahya Abdul-Mateen III, who will be playing Black Manta. Manta is one of the most famous villains in DC history and is the arch-nemesis of Arthur Curry. While he won’t be the main villain of this winter’s blockbuster, he will be there in some capacity. As Patrick Wilson looks to take over the Seas as Ocean Master Orm, Black Manta wants nothing other than revenge.

Black Manta’s backstory is dark and twisted. With the pain of death and murder mixed in with the life of Arthur Curry, the two have done unspeakable things to each other. It should make for some incredible drama on the big screen! One man’s pain is another man’s entertainment. Since Black Manta’s origin will most likely be in the film, it’s time to break down some of his greatest achievements in the comic world. Well, greatest achievements might not be the best way to put it. Let’s call them “horrific killings.”

Black Manta is a cold-blooded murderer having killed many, many people in Arthur’s life as well as the DC Universe at large. But, some deaths are more memorable than others and are particularly vicious in the grand scheme of things, even for a killer like Manta.

To help you prepare for this new terror lurking in the deep, here are the five most vicious kills by Black Manta! 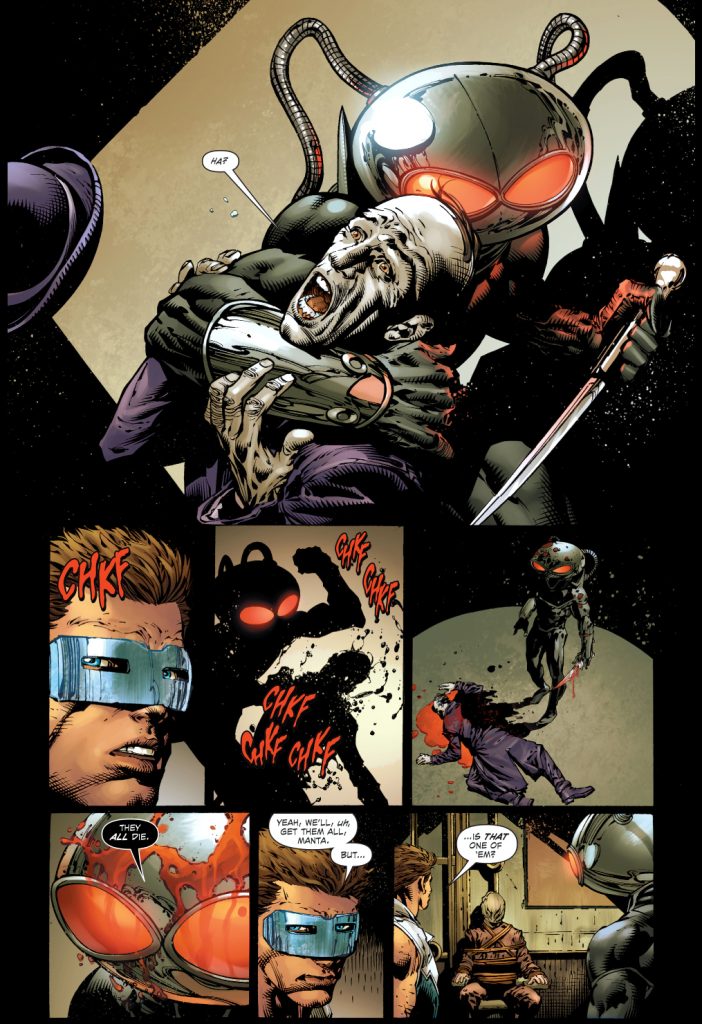 So it doesn’t exactly look like it, but that’s Alfred Pennyworth Manta is killing. In the Forever Evil storyline, Pennyworth came from another dimension to warp the main DC Universe with his Secret Society. The entire story was a brutal fight between incredibly powerful heroes. When Manta and the rest of the Injustice League take back the Watchtower, the Outsider is the one in charge. Hence his need to die. Being covered in his blood after stabbing him to death is either badass or completely horrific. Either way, it’s typical Black Manta. 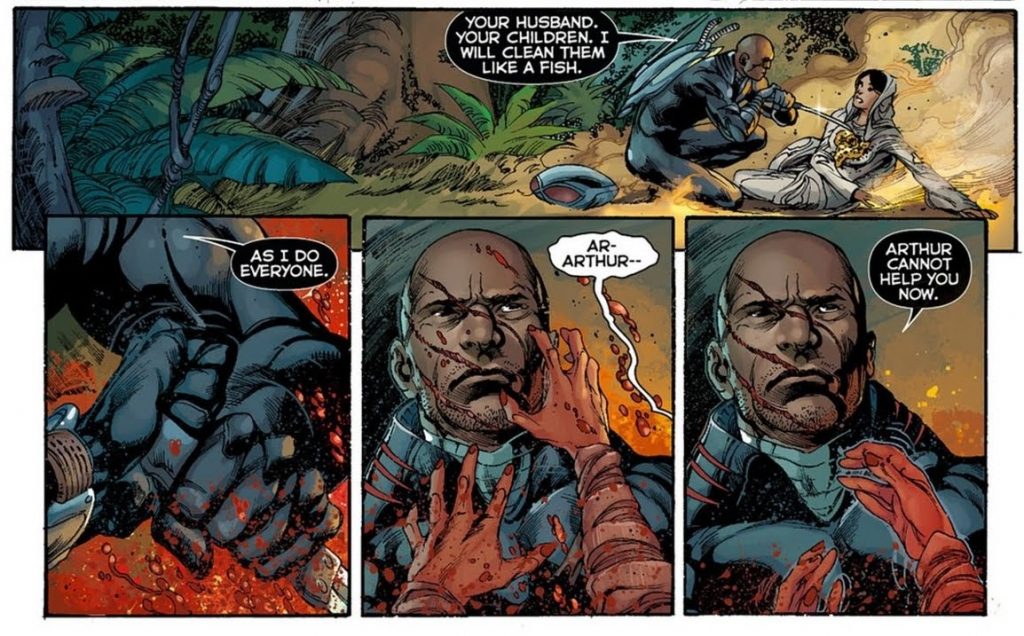 It’s not always beneficial to be a friend of Aquaman. Arthur once belonged to a team of adventurers known as The Others. They collected Atlantean relics as well as doing various deeds throughout the Seven Seas. In The New 52, Black Manta decides he’d like those Atlantean relics and starts hunting down Arthur’s former teammates. This prompted a long fight between the two forces which led to some casualties including the death of Kahina the Seer whose last vision was the death of Aquaman. Luckily, that didn’t come to pass. Unfortunately, her death did. 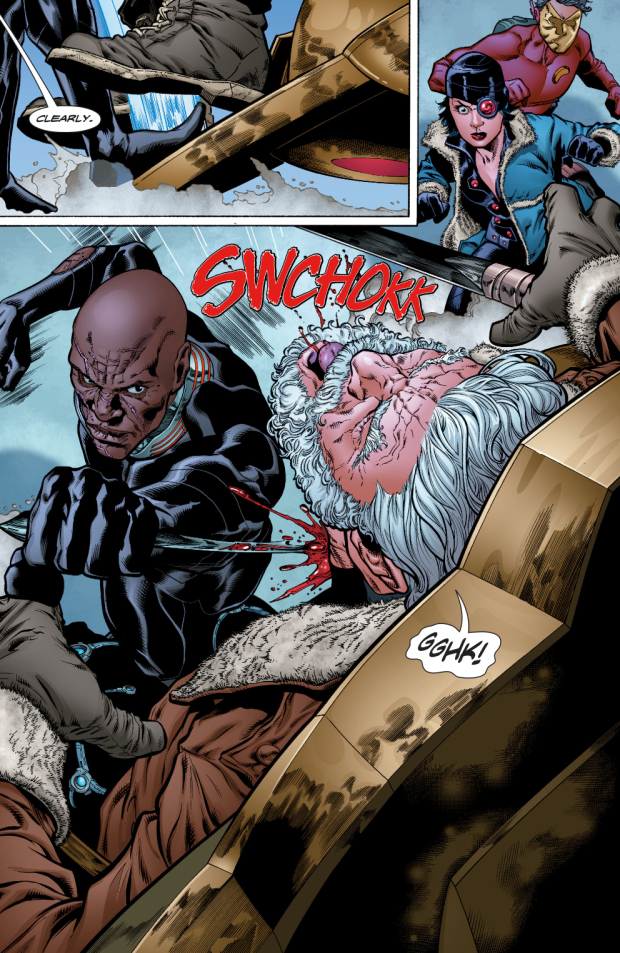 That knife certainly gets around, doesn’t it? This time it finds itself in the neck of the Fisher King. He was arguably referenced in last year’s Justice League, but was more relevant to Geoff Johns run on Aquaman. The Fisher King was the head of an organization known as N.E.M.O. Essentially an evil A.R.G.U.S. that operates under the seas. Well, when the Fisher King made the mistake of trying to recruit Black Manta, you can see what he got instead. Manta used the opportunity to seize control of operations and gain his own army.

An Entire Shop of Coworkers and Customers 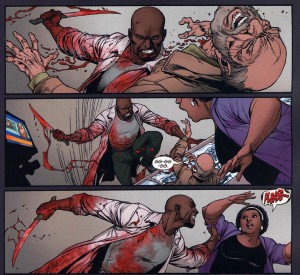 In Brightest Day, Arthur actually comes back from the dead! Not exactly unusual for a comic book character, but it was a cool and interesting story. After his death, Manta had taken up a simple job cleaning fish in a shop. But when news broke of Arthur Curry’s return to the living, Black Manta reacted by sending some people to their deaths. In a renaissance of his villainy, he turned his fishing knife on everyone in the shop murdering his co-workers and the customers. Manta had clearly decided that his attempt at normalcy was over, now that he had an Aquaman to hunt once more. 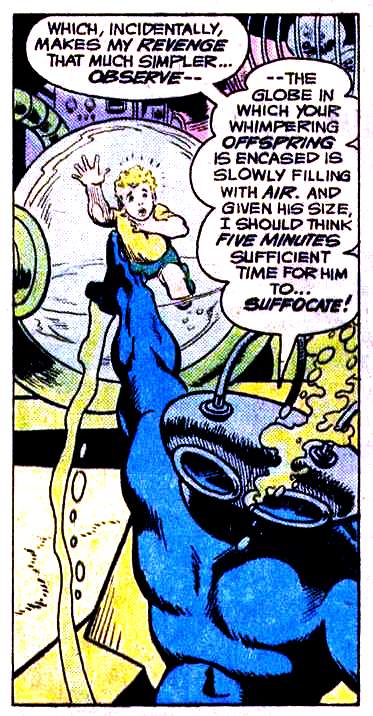 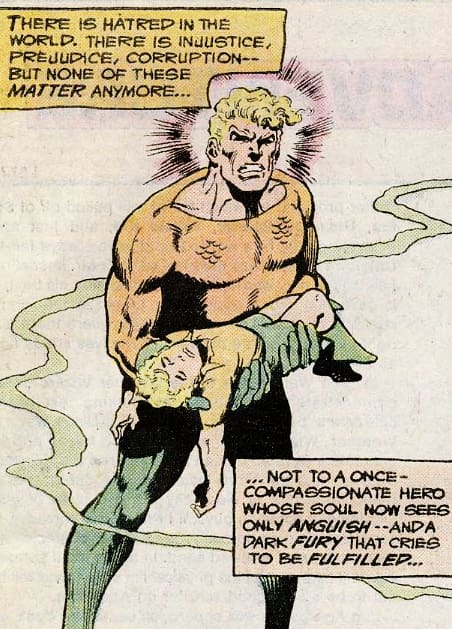 First of all, yes there was a character known as “Aquababy.” Arthur Curry Jr. was the son of Aquaman and Mera. He was a new addition to the superhero family and was created in 1965. Unfortunately, Aquababy didn’t have a very long life. Manta has always been after Arthur. Attempting to deal as much damage and pain to his nemesis as possible, Manta forced Aquaman to fight Aqualad in order to save his son. However, Black Manta never intended to let Arthur win. By the time Aquaman and Aqualad settled the situation, Arthur and Mera’s son was dead.

Together, the two buried him in a reef that was later desecrated by none other than Black Manta. Talk about overkill. The death of their son eventualyl became too much to bear leading Mera and Arthur to separate. Taking Aquaman’s child away from him was Manta’s most vicious kill by far. Manta probably won’t be murdering children when he debuts on the big screen later this year. But once a killer, always a killer.