Former DC Comics and Batman editor Scott Peterson will be teaming up with legendary Batman artist Kelley Jones for a six-issue miniseries called Batman: Kings of Fear, which is scheduled to debut in August.

The story will see an older Batman who’s been watching and protecting Gotham for years. However, doubt is starting to creep into his mind as he doesn’t feel like he’s making a difference. As this doubt begins to overtake his psyche, Scarecrow sets in motion a prison right in Arkham Asylum and Batman will be confronted with his greatest fear.

Peterson explains to CBR, “His greatest fears, from the origin stories, there’s the falling, there’s the bat in the cave, there’s obviously the fear that a loved one will die. But I thought, what’s underneath all that? I suddenly thought, ‘Oh, that’s his greatest fear’ — which I’m not going to tell you right now.”

Along with the announcement, DC Comics and Kelley Jones released a cover for the upcoming series. 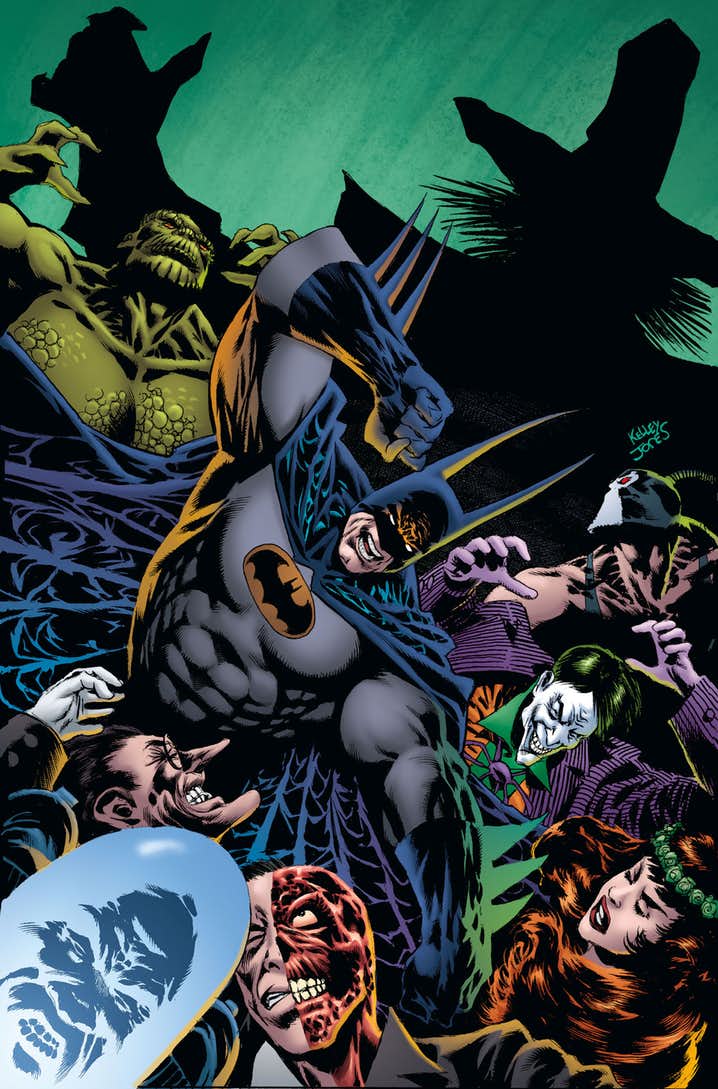 It wouldn’t take long before the book was attacked for the way it portrayed Poison Ivy on the cover. This wouldn’t be the first time a DC Comics book has been attacked for it’s cover.

Poison Ivy gets the first punch… in a mental health institute. And once more gets her character progress erased. Ask for change. Ask for better representation and fresh ideas.https://t.co/uZB00QDwtW

Despite this person’s profile indicating they are a Poison Ivy fan, it doesn’t appear they actually understand the character. Poison Ivy is a villain and one of the most infamous members of Batman’s rogue’s gallery. It makes sense that she would be pictured alongside Batman’s other villains including Two-Face, Joker, Penguin, Bane, Mister Freeze, and Scarecrow. Batman would be punching her because she is a lunatic villain.

Poison Ivy shows off her villainy in her first appearance in Batman #181 where she wants to claim the title of the number one villain. 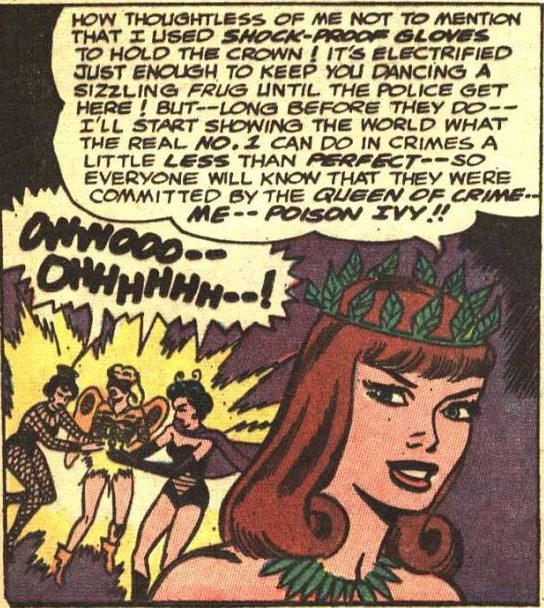 And Poison Ivy is still showing off her villainy in recent Batman arcs. In Tom King and Mikel Janin told a story where Poison Ivy actually takes control of every single living being on Earth including Superman and Wonder Woman. 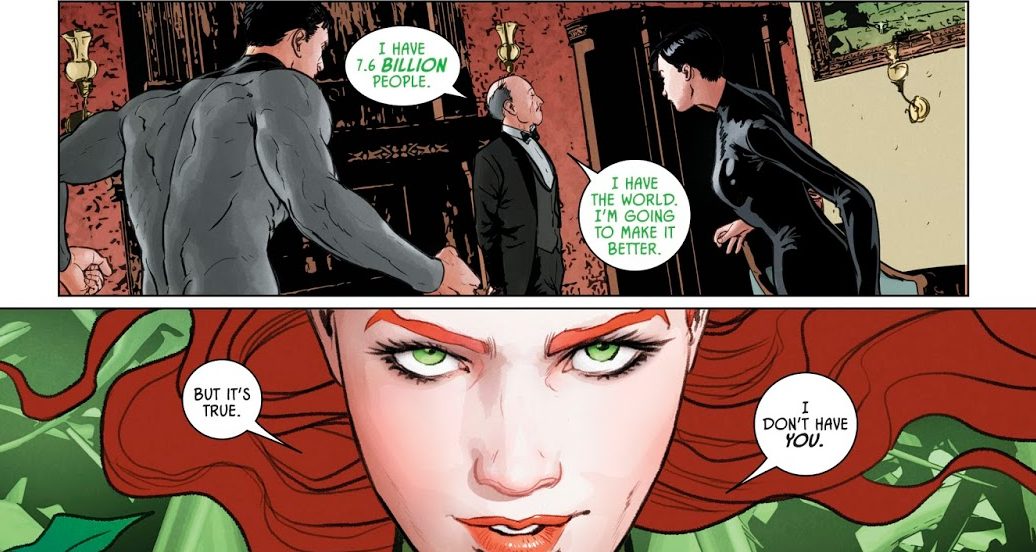 This isn’t the only recent storyline where Poison Ivy is a villain. In the opening arc of Trinity, Poison Ivy works with Mongol to capture Batman, Superman, and Wonder Woman. 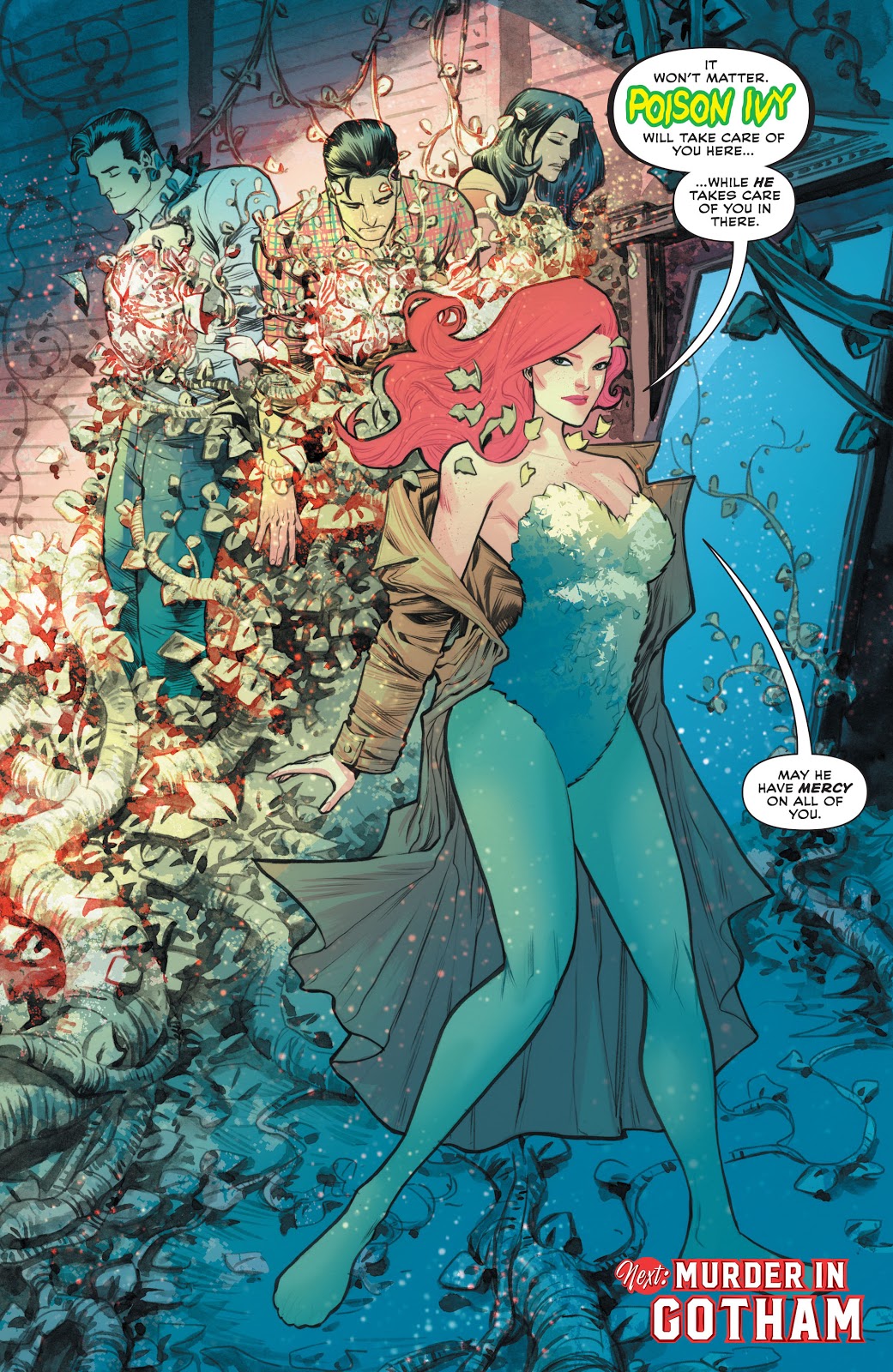 I’m not really sure why this person thinks a six issue miniseries that is taking place outside of current Batman continuity is erasing Poison Ivy’s character progression. As you can see the character is a complex villain who’s strong enough to not only subdue DC’s Trinity, but take control of the entire planet Earth. Her character is pretty villainous and has always been villainous. Has she had moments where she helps heroes? Yes, but she is still a primary villain to Batman.

As far as asking for change, Batman: Kings of Fear actually looks like a fresh idea. It’s bringing Scarecrow to the forefront of Batman’s rogue’s gallery which hasn’t really been done in quite awhile at least not on the comics side. We’ve seen Scarecrow take a leading role in Gotham and in Arkham Knight. It also looks to do a dive into Batman’s psyche and show us one of the main reasons Batman wars on crime in Gotham.

As for representation, Poison Ivy is one of the most notorious female villains, is this person trying to say women shouldn’t be villains anymore? Should they only be men? What kind of representation is that? Some of the best villains lately have been women. We’ve seen Black Siren on Arrow and Senator Nadir on Agents of S.H.I.E.L.D.

This is just utter nonsense and I can’t wait for Batman: Kings of Fear!