“Could this possibly work?”

Scott Snyder is taking over the Justice League. Before that happens, he needs to gets the DC Universe organized just the way he’d like it. So the world of Justice League: No Justice is helping to bridge the gap between Dark Nights: Metal and his future run with the League. The weekly series has been an entertaining ride through some cosmic craziness. The story moves quickly between the worlds of Colu and Earth. A war on two fronts. As the Omega Titans loom further above the small and fragile Earth the divided Justice League’s fight to save Colu. The ride continues to be fun, but this time there are a few bumps in the road in Justice League: No Justice #3.

Scott Snyder continues to hone his skills by juggling the many, many superheroes on these teams. Each voice is unique and no one feels left out. Though some issues may focus on certain heroes, there’s always enough time spent with every team that the large groups feel connected. Unfortunately, the only lack of cohesion in the issue stems from the art. This issue, Snyder is joined by artists Marcus To and Riley Rossmo. The latter’s art is a very unique style that is incredibly successful on other books. But not in the pages of No Justice.

“Cyborg to Wonder Woman…Let’s not get ahead of ourselves.”

A reasonable warning. However, it’s advice that Wonder Woman and every other superhero won’t be able to follow. The story of No Justice is grand and epic. Just about as epic of a story as you can get. Yet it never feels like anything other than a fantastic ride through every fan-favorite part of DC’s present and past. The book showcases every hero by giving them moments to stand out amidst all this war and tragedy. A complete 180 degree turn from the darker and dire story of Dark Nights: Metal. That was about a world trapped in a nightmare hanging on a precipice of blood and metal. This is a story about the peaceful worlds of the Universe being protected by heroes against massive monsters.

There’s no Robins with blood dripping from their fangs. Instead, these are planet-sized beings wielding the powers of Mystery, Entropy, Wisdom and Wonder. No easy task for even the most powerful of superheroes. So long as they work together, everything should work out. Right? 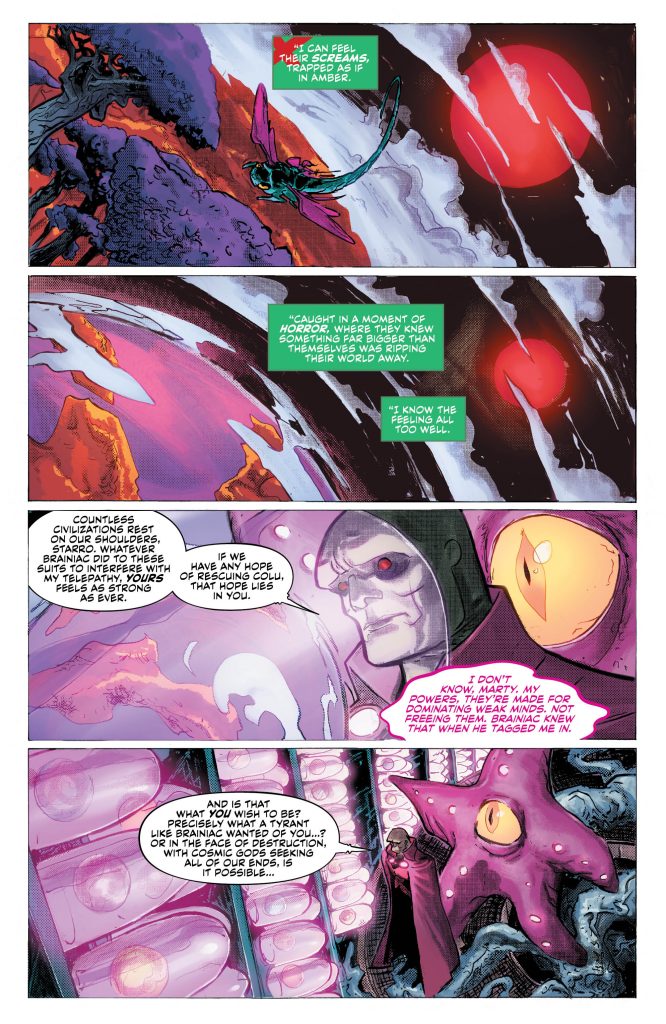 Keeping that uncertainty is what makes the Justice League: No Justice #3 an exciting story. Knowing that even as the story unfolds it doesn’t seem like these heroes will win. In fact, they may not. What if the DC Universe is destined to be plagued with these Omega Titans. Another addition to an already expanding Universe. With Scott Snyder’s writing, it never feels like the world is ending even though it is. The tale Snyder weaves is just too fun and funny to get bummed out by the end of the world.

“Is it just me, or is it gettin’ darker out here?”

Weekly series tend to be hard, on artists especially. One need only look at recent examples like Batman Eternal, Batman and Robin Eternal and Future’s End to see both the successes and failures of meshing so many styles together. Sometimes it works and sometimes it doesn’t. Unfortunately, Justice League: No Justice #3 doesn’t quite keep up with the previous issues. Riley Rossmo and Marcus To provide the art for the issue. To worked on the previous issue. Though his work isn’t completely reminiscent of Manapul’s, it worked well together. The same can’t be said for Riley Rossmo. His work is very unique. More than fitting for stories like Constantine the Hellblazer. But it does not work here. 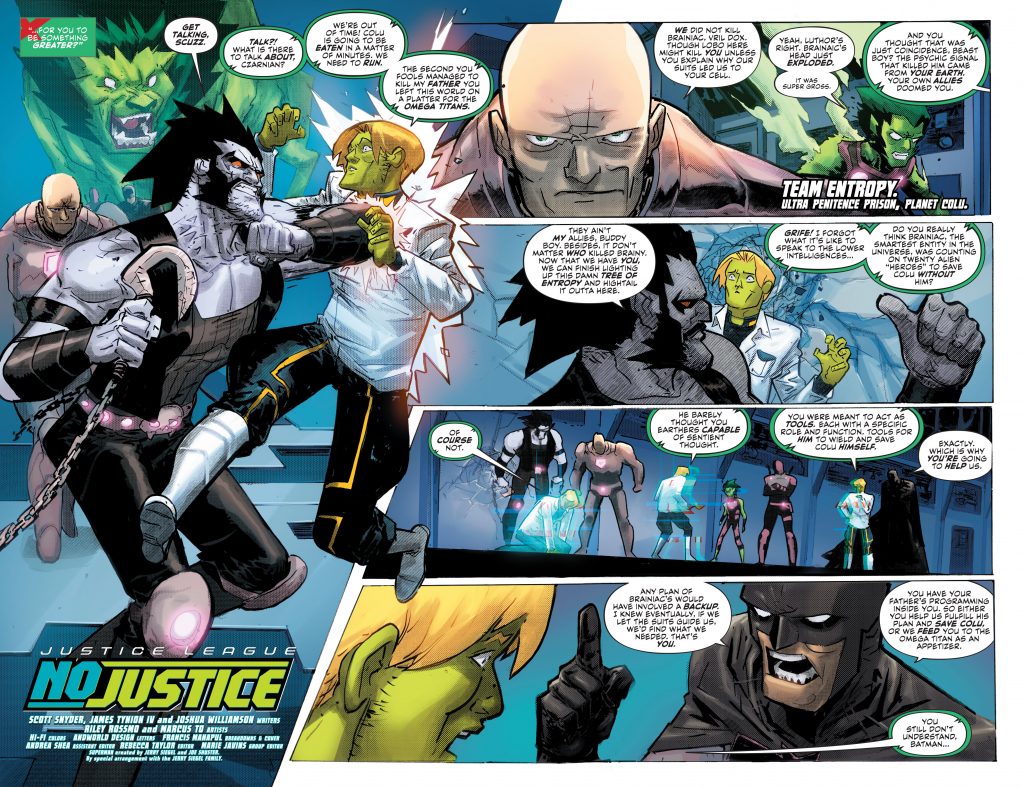 When trying to depict even typical action, the panels and anatomy can appear like drawings out of Steven Universe or The Amazing World of Gumball. Chins that are almost comically small or circular. Facial expressions and shading that make characters simply look wrong. When at his best Rossmo can provide a uniquely awesome touch. Just look at Rasputin, one of the most beautiful books in recent memory. But the style wasn’t suited for the pages of Justice League: No Justice #3.

Weekly series are meant to keep the reader invested in a story more heavily. As there are entries every week, the story should attract more readers by keeping a lengthy story together. Having so many fronts on which to battle must be hard for the Justice League. Though Brainiac made some great teams, there are quite a few things he didn’t plan for. Like his own death at the hands of Amanda Waller and a bunch of psychics. Yet here we are thanks to the creative and inventive writing of Scott Snyder. A master of mystery who has brought even further havoc to the DC world he claims to love! And still the story and pages manages to fly by with humor and excitement.

Snyder has created an interesting dynamic with the teams of No Justice. Every issue builds on the strengths of his writing and continues to build momentum to his Justice League.

The weekly series suffers from an issue that has plagued many others. While Francis Manapul drew the first issue, this one falls to the talents of Riley Rossmo and Marcus To. The former’s creative touch does not mesh well with that of Manapul or To’s. An issue that hampers Justice League: No Justice #3 greatly. It doesn’t slow down the momentum of Snyder’s Justice League, but it hurts an otherwise entertaining story.