Funko, a toy company known for its amazing selection of nerd culture based dolls, is the center of a controversy after a customer at a Raleigh bank claimed one of their figures was racist. The figure in question was displayed on one of the bank employee’s desk and featured The Walking Dead’s pet zombies of fan-favorite character Michonne. 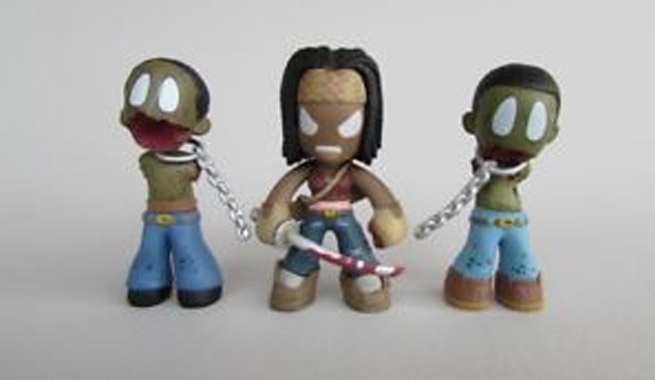 “An African-American customer took offense to toys on the desk of a white employee at the Louisburg Road branch of the State Employees Credit Union,”

The customer, Stacey Smith, shared photos of the Bank employee’s business card, and the Funko toys she found offensive on Facebook. The post has been shared by over seven thousand people. In it were photos of the office and some screenshots of the bank employee’s own Facebook comments post.

So I’m just leaving the Credit Union on Louisburg Rd in Raleigh NC. While sitting in one of their representatives office handling business I notice half way through my transactions a black doll with a noose around its neck and hands tied behind its back. After everything was done the representative asked me if I had any questions and I told him yes, I do. I asked him what did that doll mean with the noose around the neck and he says to me, (I collect them.) I said, well that doll is very offensive to me and he gone say, (In what way?) Right then I walked out of his office and went straight to the receptionist and asked for his boss! #public

The photos in the above post also show Matt Anderson, the bank employee, said the toys were next to Carl, but based on the photos that doesn’t appear to be the case. It’s possible Carl could have been cropped out.

Anderson wrote, “I have officially been accused of racism for my choice of desk toy. Apparently a story about a strong female character of color and overcoming adversity is offensive. Carl will have to be kept company by Mr. Poopy Butthole.”

The photos also allegedly show Anderson giving out Smith’s information. However, another screenshot indicated the person he allegedly gave the information to denied ever receiving it.

“And despite the fact I’m sure you won’t believe me Matt didn’t send anything to me, apparently he took that post down before he could, why? I don’t know and honestly don’t care.”

SECU Executive Vice President of Organizational Development, Leigh Brady, issued a statement in regards to the possibility of Anderson giving out personal information on their clients:

“State Employees’ Credit Union prides itself on the fair and equitable treatment it provides its members, and takes its members’ privacy seriously. Yesterday, the actions of one of our employees fell far short of our expectations and we took immediate steps to address this personnel matter.”

It’s unknown at this time if the employee faced any repercussions because of the exchange, as Brady wouldn’t comment on what “immediate action” meant.

This all stems from a Funko Mystery Mini. The mini is a depiction of Danai Gurira’s Michonne and her two zombie pets as seen on AMC’s The Walking Dead. Both of the zombies are black males who played very important roles in her life before the zombie plague brought on the collapse of humanity. In the story, the reason she had them chained to her in the manner depicted was to protect herself from other walkers.

Is this a case of someone being overly sensitive? I believe so because the offended party’s reaction shows their ignorance of the story behind the doll.

Both offended customer and the employee have had no further comment about this situation. But the lesson seems to be that if you have a geek hobby you better watch out because you might offend someone.