Earlier today, Roseanne Barr’s TV show, Roseanne, got canned after she wrote a tweet comparing Valerie Jarret to the offspring of the Planet of the Apes and the Muslim Brotherhood. 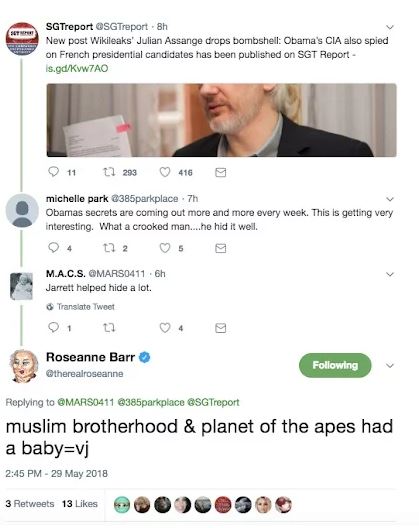 I apologize to Valerie Jarrett and to all Americans. I am truly sorry for making a bad joke about her politics and her looks. I should have known better. Forgive me-my joke was in bad taste.

Of course, speech has consequences, that isn’t the issue at all. I believe commentator Dave Rubin said it best in a Tweet:

Roseanne exercised her free speech and ABC decided to end their free association. Now it’s on you to either support her or not, boycott ABC or not, or share your own opinion as a free person or not. Once again, freedom is messy but it’s better than the alternative.

Both parties came into their relationship voluntarily and we can only assume the contract they signed allowed both parties to have exit strategies. ABC exercised their exit strategy.

It wasn’t long ago when I reported on Gabby Rivera and her toxic Twitter account. In it, we saw a whole slew of disgusting racist tweets against white people for simply existing. Here’s just an example where she equates people “defending whiteness” to feeding people to lions.

I’m tired of family members &a latinx folks in the media defending whiteness & police & Trump. Nope, how you gonna serve us to the lions?

This attitude Rivera takes towards white people has left many Puerto Ricans stuck in a cycle of poverty that has done more to hurt my community than what racists could ever dream of doing at the height of Jim Crow.

Rivera’s racist tweets are still accessible via Twitter and yet Marvel Comics and Disney by extension didn’t do anything. In fact, the only reason her book, America, was cancelled was because of poor sales. The second trade paperback of America was just released last month. Marvel did what Marvel does best, stuck its fingers in its ears, and hummed. But this isn’t the only example. No, there are plenty of other examples of Marvel writers tweeting out racist garbage with zero accountability.

Chip Zdarsky, the writer of Peter Parker: Spectacular Spider-Man and Marvel 2-in-One decided to Twitter vomit at the beginning of this month with some vile tweets. I have to ask if this was someone with the “wrong” political opinions, would he still have a job?

I believe we can all honestly answer with a plain “no.” Unfortunately for Marvel, these two aren’t the only ones within the publisher who uses the platform to spill racist and violent content.

Saladin Ahmed, who is currently writing Exiles at Marvel Comics accused the cereal Corn Pops of being racist. In a series of tweets, Ahmed was able to successfully get Kellogg’s to apologize for the cereal box art and issue a new round of coloring. But Ahmed also seems to have something against white people as YouTuber Diversity & Comics points out:

There’s also Magdalene Visaggio who went on a hateful rant where she threatened to beat “Cis” people with a spiked bat. 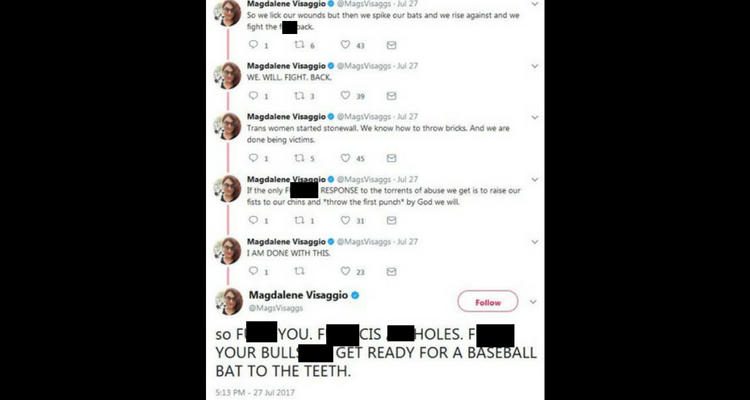 Let us do a mental exercise. Replace the word Cis with Black, Jewish, Brown, or Asian. Would Marvel comics stand by this? This is an honest question, please insert any other group, religion, sexuality, nationality, etc. Would this be acceptable for Marvel? Anyone with two functioning brain cells would think it’s absolutely unacceptable.

Now, I’m not requesting that any of these writers be fired, I believe that a person should be able to enter the market unmolested and be allowed to sell their products. But we’ve proven again and again that the field isn’t fair if you’re politics are anything right of Stalin or if you don’t believe in the progressive worldview.

This consistent double standard by Disney to selectively go after people is nonsense. You either stand by all of your artists or you stand by none. You have to pick one, because as we see with Roseanne’s cancellation, if you don’t tout the “correct” political opinions you’re livelihood can be at stake. But if you do tout the “correct” political opinions like the above Marvel Comics writers you are somehow immune to any retribution for racist behavior.

At the end of all this Disney is a private company and they are well within their rights to associate with whomever they choose. I don’t believe anyone should be forced to work with people they don’t wish too. So I support ABC’s choice to cancel the show, though I’ve been enjoying it so far.