Valiant Entertainment has teamed with Sony Pictures to finally get their movie universe up and running. The two companies are currently working on a five-movie set that will introduce audiences to the Valiant Universe. The first film on the docket is Bloodshot, which will star Fast and the Furious actor Vin Diesel as the iconic Bloodshot.

Diesel will bring Bloodshot aka Ray Garrison to life in the upcoming film. In order to get an idea of what he will look like in the upcoming film, Diesel commissioned Valiant artist Lewis LaRosa to draw him as Bloodshot. If you are unfamiliar with LaRosa, he’s one of the best artists in the business who has worked on Valiant’s X-O Manowar, Bloodshot Reborn, Harbinger, Shadowman, Ninjak, and more. He’s also done work at Marvel working on The Punisher Max as well as The Amazing Spider-Man.

In a now deleted Tweet, LaRosa said Vin Diesel asked him to draw him as Bloodshot in a Cary Nord layout.

Take a look at the commision below: 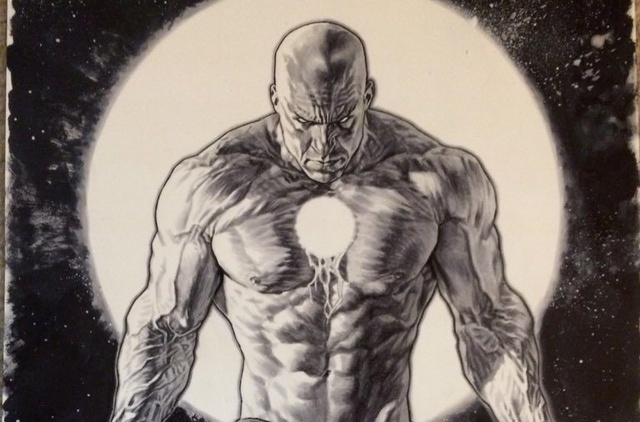 I have to say it looks pretty awesome. I love how he included Bloodshot’s iconic red circle as the background as well.

LaRosa would go on to say he would re-pot the image sometime next week with a proper scan.

Sorry, guys – had to take down that last drawing. Hopefully I’ll be able to re-post it next week with a proper scan. Thanks for all the nice words!

Vin Diesel will be joined in the Bloodshot film by Eiza Gonzalez, Michael Sheen and Sam Heughan. No details on who they are playing have been revealed.

Bloodshot is a Terminator-like super soldier that was created by the ruthless government contractor, Project Rising Spirit. Ray Garrison is injected with microscopic nanites that give him increased strength and agility, but also a rapid healing factor that make him nearly impossible to kill. The nanites also affect his skin color and give him the ability to match his surroundings and provide camoflauge. However, he’s normally depicted with bone white skin with a red circle on his chest.

Project Rising Spirit not only injected Ray Garrison with the nanites, but they also implanted a number of fake memories so they could manipulate and control him. They used him to hunt down and kill psiots, which are humans with X-Men like abilities. Fortunately, he was able to break free of the programming and become the hero known as Bloodshot.