War has ravaged the known world. Forces from across the sea have dominated all local colonies, save one. One province stands un-conquered; a province on the brink of destruction. With the king dead and the heir to the throne an untested young girl, it seems that the final chip is about to fall for the last free kingdom in the East. That is until a mysterious stranger finds his way into town and sets a series of events into motion that could spell redemption for a kingdom on the razor’s edge of destruction. Thus, we have the setup for the first issue of Image Comics’ brand new series: The Last Siege. 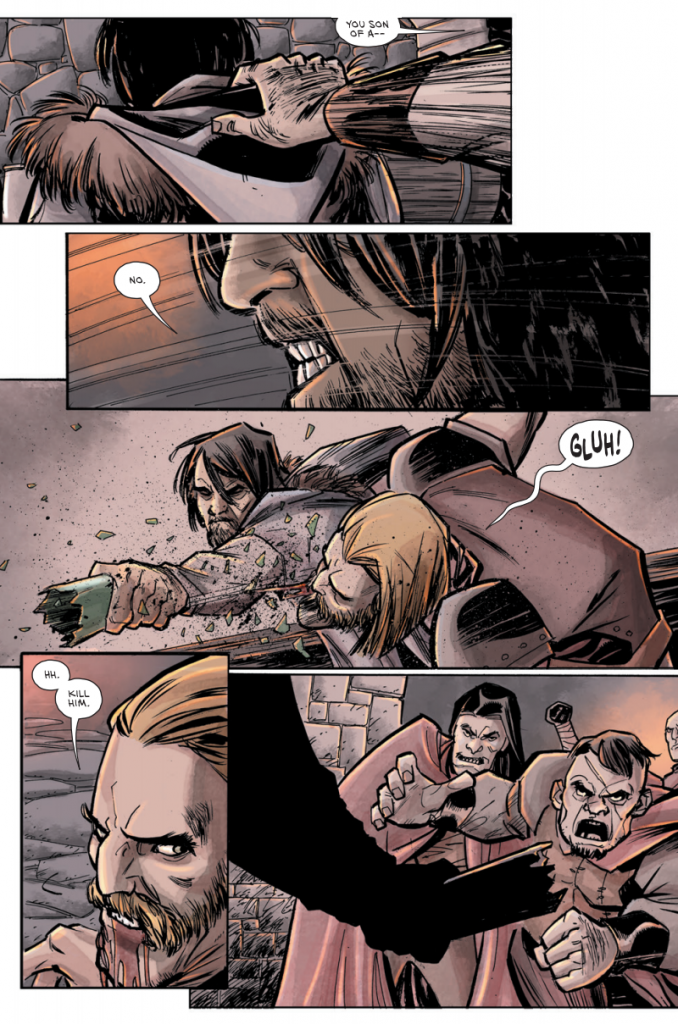 The Last Siege kicks off in daring and provocative fashion. Five full pages of the issue pass before a single line of dialogue is spoken. Artist Justin Greenwood provides a stellar introduction into a world that wouldn’t look out of place in any high fantasy graphic novel. As a weary and cloaked traveler makes his way down a rainy forest road, thoughts of the town of Bree from the Lord of the Rings films come immediately to mind. The world that is being built is immediately recognizable, even though we don’t really know where it’s supposed to be. High fantasy is a genre that is intimately familiar to so many of us and the art of this first issue does a fantastic job of taking a setting that could seem cliché and rote and making it feel intriguing.

We’re not given too much insight into many of the characters; almost none of them, actually. The ones we are introduced to do not get much page time and some characters that are set up to be major players in the story get little (or no) speaking parts. This is the first issue, however, and not everyone can take center stage, but I didn’t feel like I had much time to get invested in most of them. 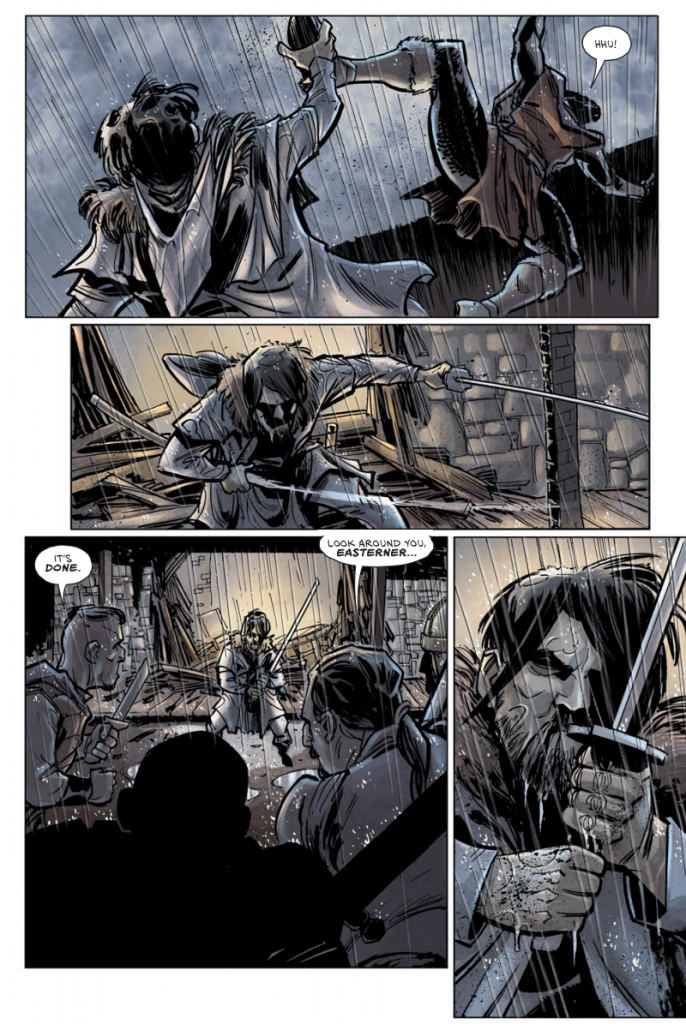 The exception to this, however, is the one character who looks like he will be taking center stage going forward. The mysterious stranger who wanders unassumingly into town certainly makes an impact. He doesn’t say much, but for a character whose entire arc is basically split between walking in the rain and fighting outside a bar, he is set up nicely as a cool, brooding protagonist that I am excited to see more of. He’s equal parts Aragorn and Clint Eastwood and the reveal he’s involved in on the last page is intriguing and points to some promising developments in subsequent issues.

The book, on a whole, doesn’t cover a whole lot of ground timewise and it assumes that the reader won’t mind jumping into a world that is already deep in conflict while not being given much exposition to bring them up to speed. We’re given a vague description of the various kingdoms that have been under siege from the enemy to the West, but that’s about it. That being said, though, the story that we ARE given, while quick and brief, is exciting enough to pull the reader in and convince them to trust the writers to make their time worth it. For me, it worked.

Any time I see comics, movies, TV shows, etc. that are placed in high fantasy settings, I automatically begin looking for signs of the fantastic like magic, dragons, wizards, and the like. So far, writer Landry Q. Walker has kept The Last Siege grounded in reality and eschewed the Lord of the Rings style fantasy. That’s a hard sell to someone like me who loves all the dragons and elves that I can get. It says something impressive about a story that can extract all those things and still suck me in the way this one did. The writing, art, and tone all hit home for me and everything came together in an extremely satisfying way. It wasn’t perfect, but I immediately wanted more, and THAT’s good story telling!