Doctor strange knows what happens in the future, he sets it up in fact. He knew that Thanos had to snap his fingers at that exact right time and under all these certain conditions for them to win. He’s setting up Captain Marvel’s return to Earth. I believe he’ll appear in the CM movie and tell Fury it is vital for him to carry around with him the pager to contact Captain Marvel. Nick Fury, knowing about Steven Strange lists him as an ally to shield which of course is how Hydra knows about him despite him being a neurosurgeon (anyone who is an ally of SHIELD is a threat to HYDRA). He warns him of an event in the future refering to the people turning to dust without warning, this is why Fury’s instant reaction to seeing Maria Hill turn to ash was to run to the pager, but what our good friend Sorcerer Supreme didn’t mention was the fact that he does not survive hence the “Mother Fu…” at the very end. We should also take note that the way he says it isn’t paniced or scared, he’s confident that Strange knows what he’s doing.

Doctor Strange definitely saw the future and he tells Tony Stark, there’s only one possible future out of 14 million in which the Avengers succeeds. It explains why he gave up the Time Stone to Thanos.

However, the theory takes this a step further and implies that Doctor Strange had already glimpsed this future and set it in motion. He will somehow have traveled back into the past in the upcoming Captain Marvel movie which is set to take place in the 1990s.

While in the past, Strange will instruct Nick Fury to carry the pager that allows him to contact Captain Marvel as seen in the post-credit scene of Avengers: Infinity War.

The theory goes off the rails a little bit in the next section by trying to explain why Hydra would have Steven Strange on their list of potential threats during Captain America: The Winter Soldier.

“Hydra knows about him because he’s intelligent and opinionated and would be a problem for them even if he were just a neurosurgeon. That was the point of Project Insight. To identify and eliminate people like that before they ever have a chance to become a threat. That was the point of mentioning him. Hydra was totally fine with killing a neurosurgeon who is healing people and making the world a better place because he might not be 100% on board with Hydra’s goals.”

The theory gets back on track as it explains that Strange will warn Fury about Thanos’ pending attack, which will eliminate half of all living beings in the universe. It explains why Fury instantly goes for the pager after he sees Maria Hill to turn to ash. It also explains that Strange didn’t inform Fury that he would also perish which is why he says, “Mother Fu…” as he turns to ash. 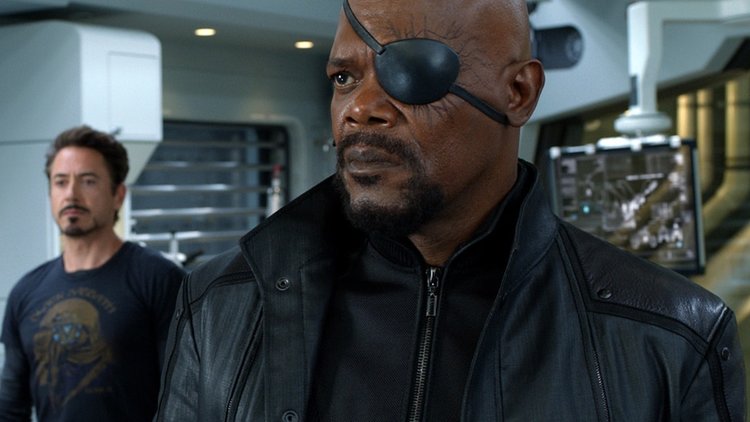 Probably the biggest piece of evidence the theory uses is Samuel L. Jackson’s demeanor as he turns to ash. He’s not panicked or scared. He does seem like he already knows this is going to happen, but he just didn’t know he would be turned to ash as well.

What do you make of the theory? Do you think Doctor Strange traveled back into the past to set things in motion for the one in 14 million chance of defeating Thanos and coming out on top?