Damning new Tweets from Marvel’s Director of Content and Character Development Sana Amanat have surfaced just days after C.B. Cebulski announced to the world that Marvel is “100% committed to diversity.”

Does Marvel make comics for all Americans — including Republicans — @MiniB622, @CBCebulski? Any thoughts on this deleted tweet now that you’ve had time to reflect on it? @BoundingComics @bleedinfool @DiversityAndCmx pic.twitter.com/OqUUO51VFA

As a Republican myself, I find this Tweet laughable at best. But it’s also quite troubling. It shows that if you don’t fall into lockstep with the ideology of the left, you will be attacked for it.

This isn’t the only Tweet that Ernst uncovered. Amanat posted Tweets back in 2016 where she agrees with another poster who says they don’t even believe in “diversity.” In fact, the user she agrees with even says, “Diversity is stupid.”

Amanat writes back in May of 2016, “One day, we all will be brown. (And NO that does not mean I plan to spread shariah law). She would add in December of 2016, “You know what? I’ve changed my mind. Diversity is stupid. From now on every person in everything should be brown.” She continued, “That’s the future once we start inter-breeding. Brown will rule. Muhahahaha.”

Meet Marvel’s Sana Amanat. Putting tweets down the Mighty Marvel Memory Hole doesn’t always make them go away. Comments, @CBCebulski? Since when was an ideally diverse world defined as “we will all be brown”? Weird. I wish you guys explained that one in your CBS interview. pic.twitter.com/Jd7xA8FLum 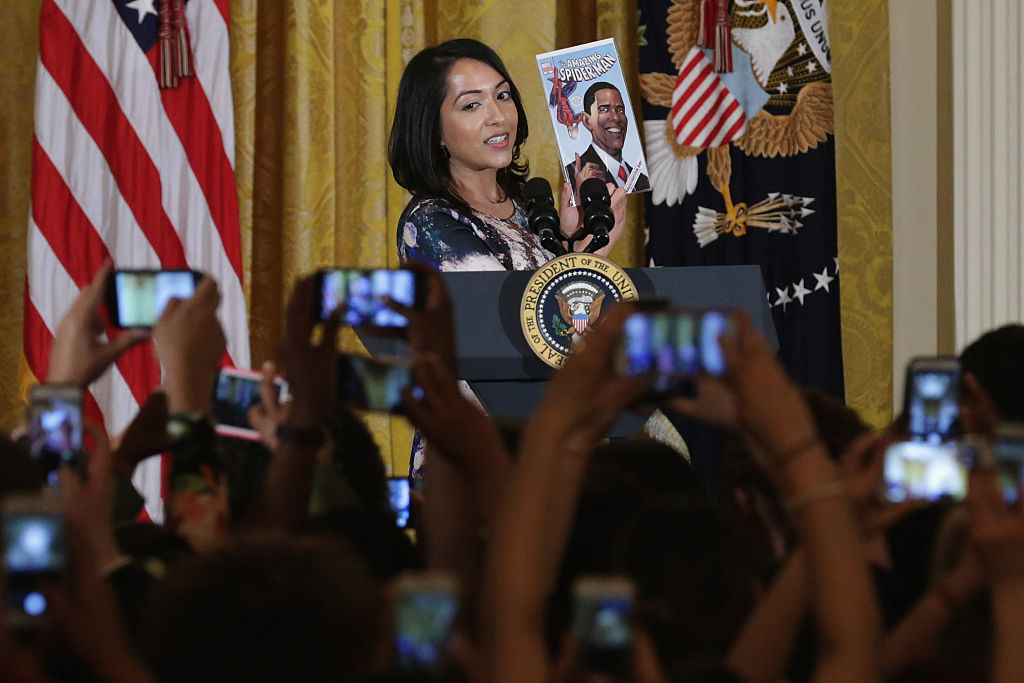 U.S. President Barack Obama delivers remarks during a reception for Women’s History Month in the East Room of the White House March 16, 2016 in Washington, DC. The month-long celebration of women’s history in the United States began as ‘WomenÕs History Week’ after legislation was passed by Congress in 1981.

And if you didn’t think Amanat was injecting her own personal politics into the characters she works on, she made it crystal clear during an interview on Late Night with Seth Meyers. When asked how Kamala Khan would react to meeting then-candidate Donald Trump, Amanat answered:

“The first thing she would say is that he’s doing such irreparable damage to young Americans, and minorities everywhere. Words and images are really powerful, and these young kids are actually having a perception of themselves that’s not true, and that’s so dangerous. And then she’d probably remind him that his grandfather was an immigrant, I believe, and if he’d had the same type of vitriolic sentiment thrown at him, Trump would not have had the opportunities he’s had, or the success that he’s had. And then she’d probably fly off with the Avengers and save the world from actual bad guys, and prove him wrong about who Muslims really are.”

Can Marvel really be 100% diverse when people like Sana Amanat are working at the company and believe “diversity is stupid.” Can Marvel be 100% committed to diversity when Sana Amanat claims she wants everyone to be “brown?” Can Marvel be diverse when their Director of Content and Character Development thinks Republicans hate “Mexicans, Jews, Muslims, women, native Americans, the environment, science, and KIDS?”

It doesn’t look like Marvel actually embraces diversity on any level. They don’t really want racial diversity. And they surely don’t want intellectual diversity. Like many people who share her point of view, they’re looking for lockstep conformity to their own worldview. It reminds me of a catchphrase from  Star Trek’s Borg. “Resistance is Futile.”

That opinion and belief permeate much of what is seen in these Tweets and how people like her view the world. If you don’t agree, you will or else.  It’s their diversity, their view, that is right. Nothing else.

Is Diversity Really the Issue?

With all this talk about diversity, is it even the problem at Marvel or is it the actual quality of their comics? Is Marvel just trying to hide their poor comic book stories behind a curtain of diversity?

We spoke with former Marvel artist Jon Malin, who most recently worked on Cable and has now raised over $300k for his Jawbreakers – Lost Souls graphic novel, about the subject.

“Regarding the publishing end of Marvel, Cebulski needs to focus less on the color of his employees skin or cultural backgrounds and get down to stone cold f****** business. This PC s*** should have ran it’s course when he came on and it’d be laughable if peoples livelihoods weren’t on the line and retailers weren’t falling left and right. We (fans, distributors, retailers, artists, convention organizers, EVERYONE) need absolute KILLERS in Marvel from top to bottom to turn this ship around and it’s overflowing with f****** talks of race, gender representation of it’s employees and other nonsense while the damn ship is sinking. I’m reminded of a quote from it’s former EIC Joe Quesada, a KILLER, when he said years ago…. allow me to paraphrase to make my point…’What the f*** is MARVEL COMICS anyway? They’d be better off calling it PC Comics. At least people know what PC is. I mean, they have Wolverine and Spider-man, and they don’t know what to do with them. That’s like being a porn star with the biggest dick and you can’t get it up. What the f***?'”

Those are some good points brought up by Jon Malin. In the end good stories matter, and that doesn’t seem to be the goal of many of those who work for Marvel right now. As Sana mentioned above, the injection of personal politics has basically become an unspoken expectation if you’re part of that political ideology.

Has Marvel become too focused on the “diversity” of their characters and creators that they’ve failed to actually produce good stories?