It’s been a couple of weeks already, so we’ve all seen the film, right? Deadpool 2 has been lauded by critics and audiences alike as a masterpiece of an X-Men film. It’s like everything the X-Men should have been, except with parody and meta humor at the expense of the X-Men’s long and complicated history.

In the movie, X-Men fans were treated to cameo appearances from famous and infamous mutants alike. Some were stars who weren’t slated for a role in the film. Some cameos were so quick, that if you blinked even for the slightest of moments, you probably missed it. Other cameos were so heavily used in the film that they seemed more like co-stars in the movie. But let’s take a look at who graced the screen of Deadpool 2 and what their appearances mean for the future of the X-Men franchise!

And if the title didn’t already warn you, spoilers are ahead! 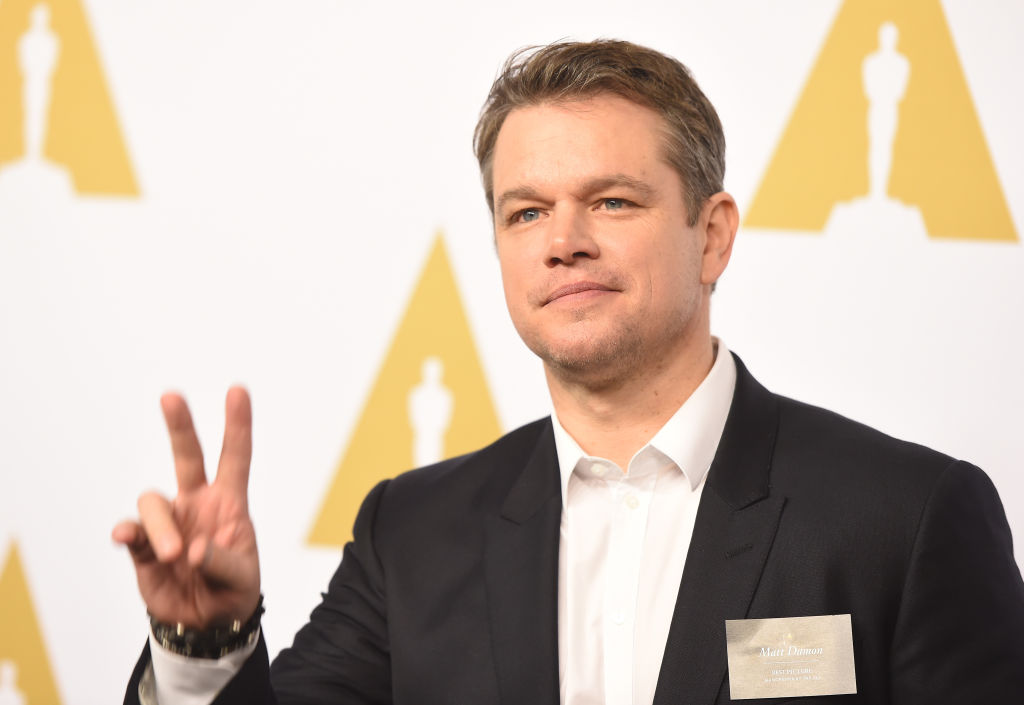 If no one noticed, it’s not a big deal, but for everyone else who has been wondering what Matt Damon has been up to recently, look no further. The man himself acted as Loki during a stageplay on Asgard in Thor: Ragnarok. The over exaggerated death scene from Thor: The Dark World was reenacted for the trickster god, glorifying him in his “death.”

In Deadpool 2, he’s so heavily caked in makeup that it almost doesn’t look like him. He’s one of the yokels Cable runs in to after he travels from the future to our present time. It’s not a big appearance, and it doesn’t affect the story in any way. Needless to say, Damon’s appearances have been short in the Marvel films thus far. Maybe we’ll get a bigger role for Mr. Damon in some future Marvel film. 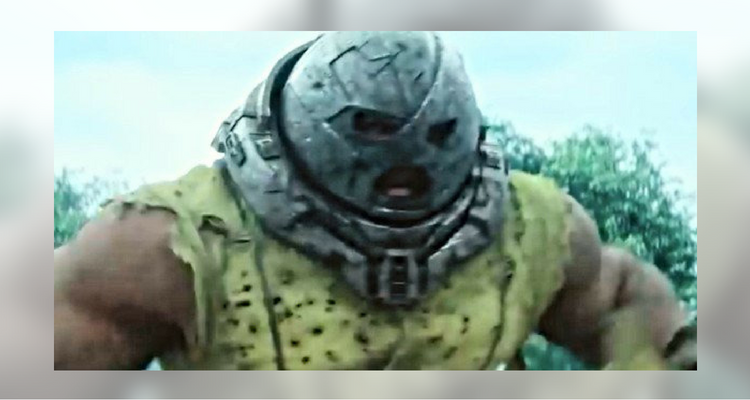 Well, it’s more like an extended cameo than anything, but the big guy shows up mid point in the film as the big-bad they have to defeat in order to get to the kid. There’s a bit of a change from the X-Men: The Last Stand version of the character, as his helmet is more fashioned like the original comic book version. There’s a bit of that hardened iron look to his helmet like the Vinnie Jones character. Maybe as a call back to that film and a way of saying “hey, we’ve made some improvements.”

I learned recently that Ryan Reynolds did the mo-cap and voice for Cain Marko. Although, there are some parts where I believe the motion capture wasn’t entirely used and the movements look too computer generated rather than anything fluid. But adding him to the film was a touch of brilliance from the writing team, and we’re hoping to see him in later films, maybe with his more iconic red armor, although that might be a little difficult as he appeared to have been killed at the end of the film. 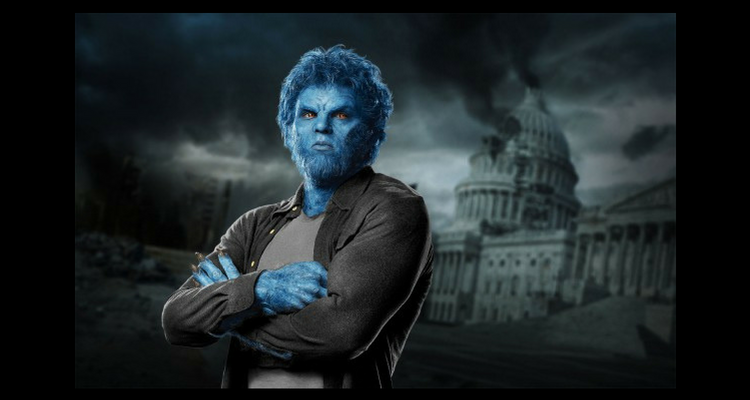 So remember in the trailer where Wade Wilson is wheeling around on Professor X’s wheelchair? Well, Deadpool’s stay at Xavier’s mansion is a little more extensive than that. He’s actually rooming at the mansion, and remarks how the studio doesn’t throw him a bone to get more members of the X-Men to show up. In a room behind him, we spot Beast and a number of the other X-Men in a distant room, looking disinterested in interacting with the merc. Beast actually slides the door shut before Wade notices them in the shot.

It’s actually a pretty funny visual joke for me, because I remember Nicholas Holt during San Diego Comic Con 2016 being blown away by the trailer for the first Deadpool film. To see his character look so absolutely disinterested in the merc was doubly humorous to me. 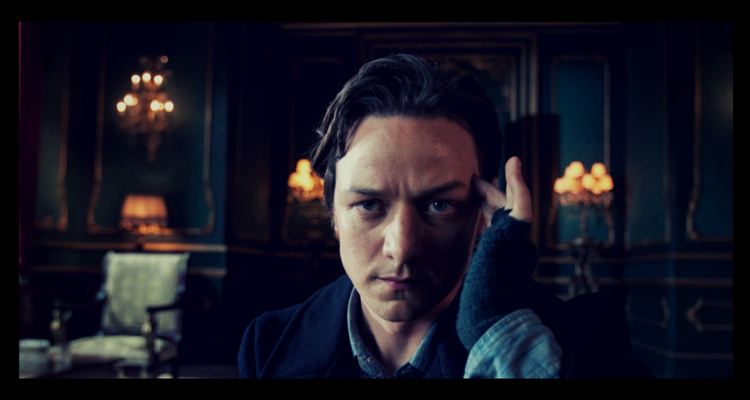 Aside from Beast, Professor Xavier in the form of James McAvoy showed up in the room, speaking with the rest of the X-Men about… something. Whatever he might’ve been talking about, he had no qualms about Wade Wilson messing around with Cerebro or playing around in his wheelchair. Maybe he’s being patient with the merc. Or maybe the usually empathetic Xavier genuinely doesn’t want to get entangled in Wilson’s antics.

Whatever the case may be, he’s there, looking just as disinterested in revealing himself to Deadpool as the rest of the X-Men are. Which is kind of disappointing in my view. I would have liked to see what the most powerful telepath in the world would have to say to the Fourth-Wall breaking protagonist. We’ve only seen it once in the comics, and… it doesn’t turn out well for Xavier in the end.

8. Brad Pitt as The Vanisher 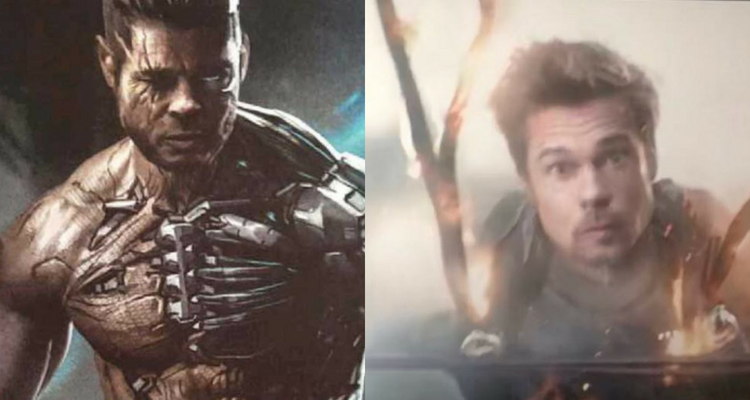 If you blinked, you missed it. There was a funny scene where Weasel introduces The Vanisher to the lineup of Deadpool’s new group. A few scenes later, the newly formed X-Force members drop out of a plane, and Vanisher’s parachute bag is the only thing seen flying through the air.

And then we get to the scene where many of the members of X-Force meet grisly ends due to high winds. The Vanisher in particular lands on an electrical wire. In the violent flashes of electricity, we see Brad Pitt amidst the smoke and shocks. The last we see of the character is a burnt out husk falling to the ground.

It’s doubly funny for the comic book nerds who have been following the news on Deadpool 2’s development. Pitt was originally considered for the role of Cable, and couldn’t play the role due to scheduling conflicts. He was so strongly recommended to the role that concept artists for the film used him as the model for what Cable would look like. Ironic that he actually shows up in the film, with some lightning arcs to high-lite his character like the concept art showed. 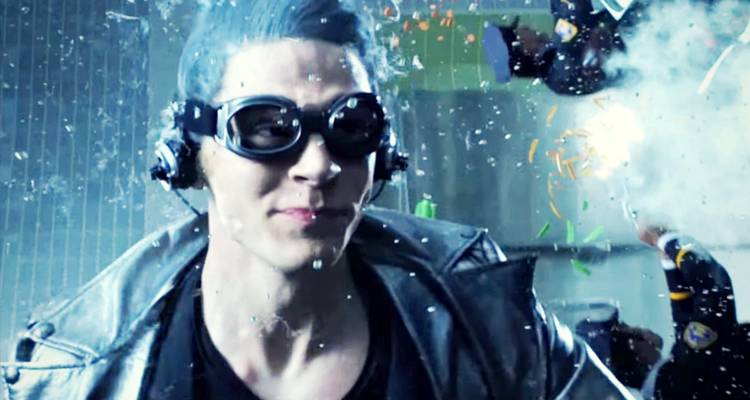 Evan Peters appearance as Quicksilver in X-Men: Days of Future Past has been so iconic that he cemented himself as part of the X-Men roster. The way he moves through scenes with little effort, running at speeds unrecognizable to the regular eye makes it seem almost like he’s a broken character. He’s faster than his MCU counterpart, to say the least.

His appearance in Deadpool 2 along with the other X-Men is just as quick. So is his bewildered look as Beast shuts the door on Wade Wilson. His is less a look of “I’m not interested in being here.” Rather, it’s more of “What am I doing here?” 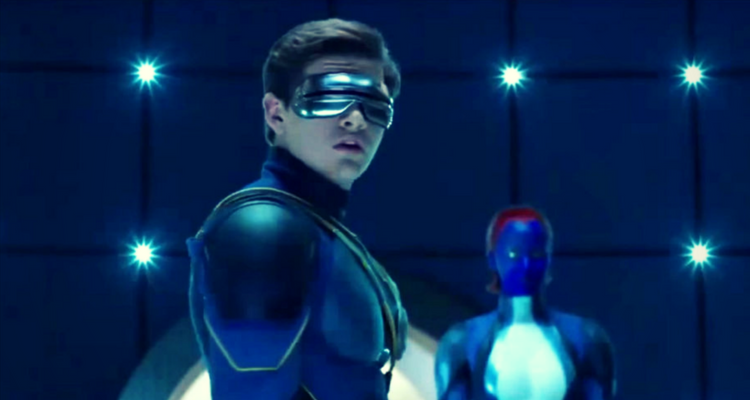 The iconic stoic leader of the X-Men is seen with the other uncanny X-Men, hiding in a room away from Wade Wilson’s presence. He kind of looks out of place in the whole lineup, as he’s mostly there as a distant statue while Beast shuts the door on Wade Wilson.

This version is the X-Men: Apocalypse Cyclops, and not the Cyke we’ve known from the earlier films. James Marsden has moved on to greater things in the Westworld franchise, and I think he’s getting more screen time and attention to his acting chops than the X-Men franchise ever gave his version of Scott Summers. And it’s a real injustice to his character, because there’s a lot of the depths of Cyclops’s character the audience misses out on. Let’s hope that with some new direction and good writing, we get more attention to the elder Summers brother as played by Tye Sheridan. 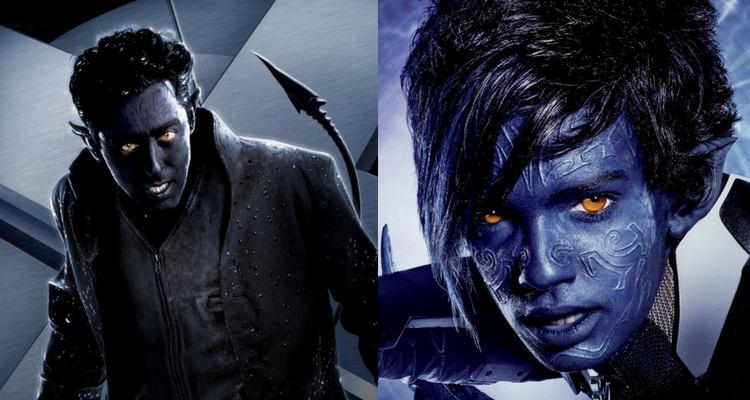 In this short scene, Smit-McPhee’s version of Nightcrawler looks just as bewildered as Cyclops and Quicksilver in that little room mentioned above. He stands alongside the other X-Men, staring out the door before Beast closes it on the merc as he’s wondering why the Fox Studios won’t feature any more of the X-Men in his film. 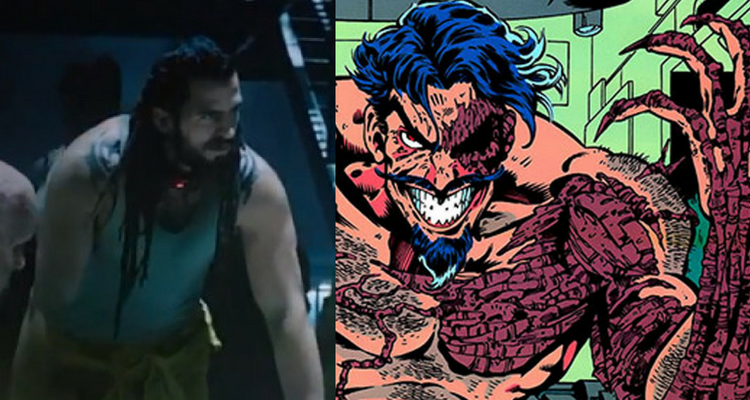 He gets a small part as part of the Icebox prison population. He isn’t using his powers, because everyone has the neck collar that inhibts the use of mutant powers. Aside from that small part in the film and a reference to his name later, we hardly ever got to see the iconic antagonist. He’s usually paired up with Juggernaut, and has control over plant life. The only other scene we get of him is during the transport scene when Juggernaut eventually breaks free.

Turns out, Black Tom Cassidy was supposed to have a larger role in the film. But for budget constraints, he was supposed to go all- out with his powers, manipulating the flora and fauna in an epic battle sequence. Unfortunately, we didn’t get much of this from the movie and he became the butt of a cultural appropriations joke. I did like Jack Kessy’s portrayal in the film. 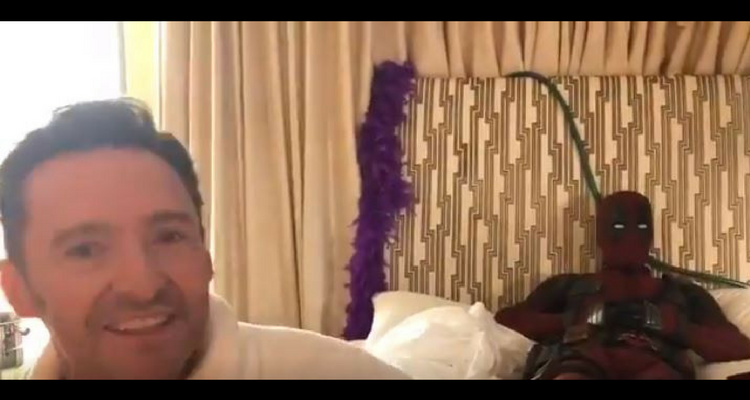 Okay, so it’s not technically Hugh Jackman who showed up on the Deadpool 2 set and put on the claws for one last time. They used old footage from the first X-Men Origins: Wolverine film to retcon some of Ryan Reynold’s earlier career choices. It’s kind of sad that this version of Jackman is nothing but a screen memory from his earlier days in the films. I’m sure fans would have loved to have seen a flesh-in-blood cameo from the ol’canucle head himself.

Deadpool manages to fix Cable’s time-travel device and goes back in time to kill the previous version of Deadpool. This was the version featured in the first Wolverine solo film, with his mouth sealed shut. Right before the mouthless Deadpool starts his fight with Logan, present-day Deadpool shows up and shoots the older version of himself in the head. Present-day Deadpool doesn’t interact much with the younger version of James Howlett, but he manages to pop a few more bullets into the failed version of his character before absconding to another time-traveling mission. I know that all sounds very confusing. You’ll just have to see it to really figure it all out. 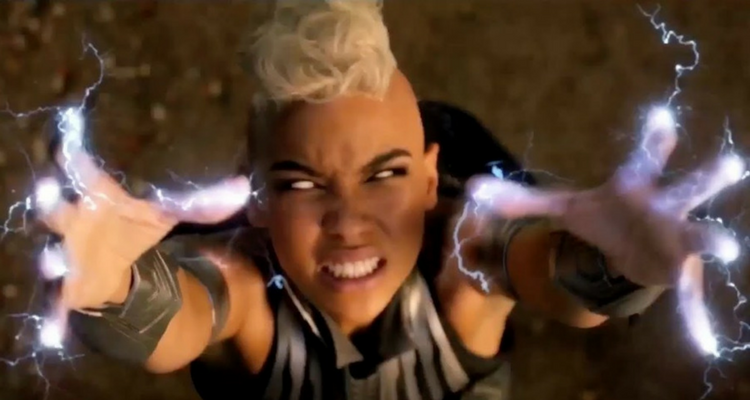 I would have liked to have seen another version of this character show up in the room. Yet, it looks like Fox Studios is dead-set on Alexandra Shipp being the new Storm. Her performance in X-Men: Apocalypse makes me doubt we’ll get a proper representation of Storm in film. But Bryan Singer is out of the picture and the X-Men might become the property of Disney and Marvel Studios very soon. So maybe we might get a better presentation of the Ororo Monroe we’ve all come to know from the comics. I can only hope at this point.

The strong-willed leader of the X-Men is both fierce and gentle. She carries the graces of a queen and the wiliness of a thief. Although in this scene, she looks just as bewildered as her fellow X-Men as to why she’s even there.

We see the rehab facility for wayward mutants on a placard in front of the building. But comic book fans will know the name of Essex well. The infamous facility of Mr. Sinister is known for its experimentation with the mutant genes and using mutants as test subjects. Mr. Sinister, a.k.a. Nathaniel Essex, is the proprietor of the facility. And he is eyeing the genes of mutants, and more particularly the Summers family, for his personal experiments.

In Deadpool 2, the facility served more as a front for some anti-mutant/purifier activities. The orderlies and administrative officials only sought to purge mutants from the population. However, it looks like the place will be out of business especially now that Deadpool and company have thoroughly killed all of their orderlies. The real purpose behind the facility and how Essex/Sinister is connected isn’t revealed. Maybe in a future Deadpool or X-Force film, we’ll get to see what it’s all about.

A Film Full of Folks

There’s a lot of people that I might’ve missed in Deadpool 2. I’ll admit it, I probably didn’t catch them all. Do you think my list comes up short of what the future of the franchise promises to X-Men fans? Did I miss anyone? Let’s connect on social media and get the conversation going!