Never judge a book by its cover. I remember hearing that old tip when I was a wee lad and even though I have found that it’s sound advice, it’s still hard for us not to do it. I went into the first issue of FARMHAND expecting a gross-out, sci-fi horror tale. While it didn’t disappoint in those regards, I found it to be so much more. It’s one of the most pleasant surprises I’ve had the pleasure of reading. This book is so much more than its cover.

Creator/Writer/Artist Rob Guillory, who is responsible for the artwork for the long running series, CHEW, brings us the strange story of an aging farmer Jedidiah Jenkins. Jenkins has found a way to grow human body parts on his farm and transplant them onto amputees or into people needing internal organs. It sounds like the plot of a SyFy Original Movie, but Guillory has managed to elevate the subject matter into an intriguing tale that is equal parts disturbing, touching, and hilarious. It’s this amalgamation of so many different layers that makes this book stand out to me. 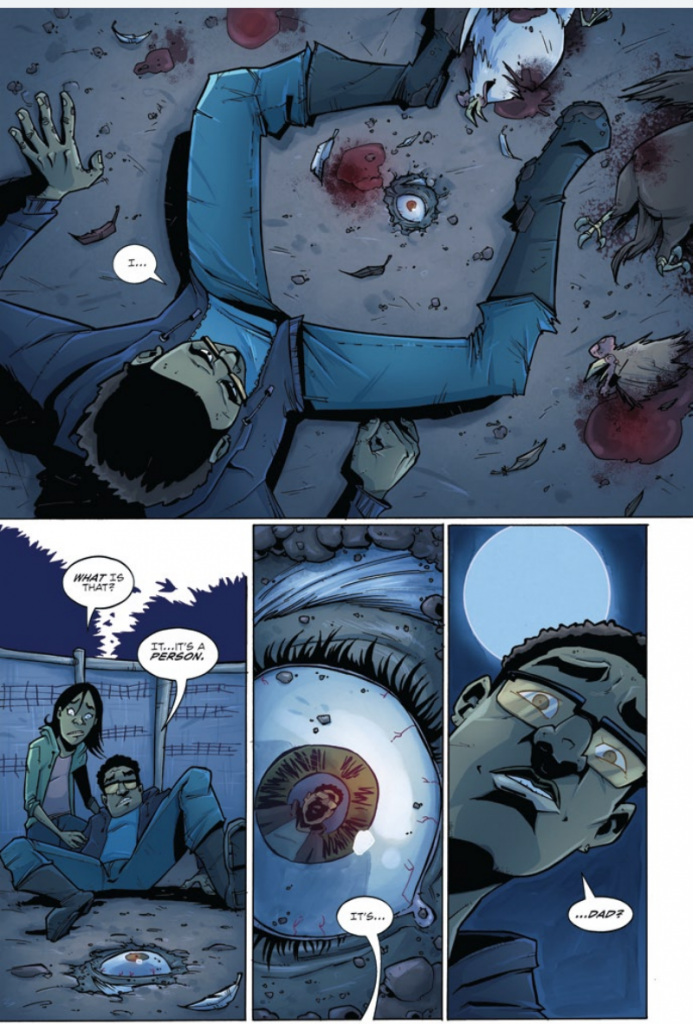 In this book, we meet Jedidiah and his daughter, as well as his estranged son and his son’s family. The fissure between father and son is handled in a realistic way and their attempt in this first issue to reconcile after years apart is touching and added a dynamic to the story that I wasn’t expecting. I was genuinely engaged with every character in the story. I wanted to see their relationships mend just as much as I wanted to see body parts hanging from the trees. (And, there was plenty of them!)

We meet a lot of people in this first issue and it could have been easy to get lost amongst all the voices. Everyone who needs to be established gets time to shine though including their unique personalities. Great story ideas can still fall flat if the writing isn’t sharp, but thankfully the characters and story are written well. 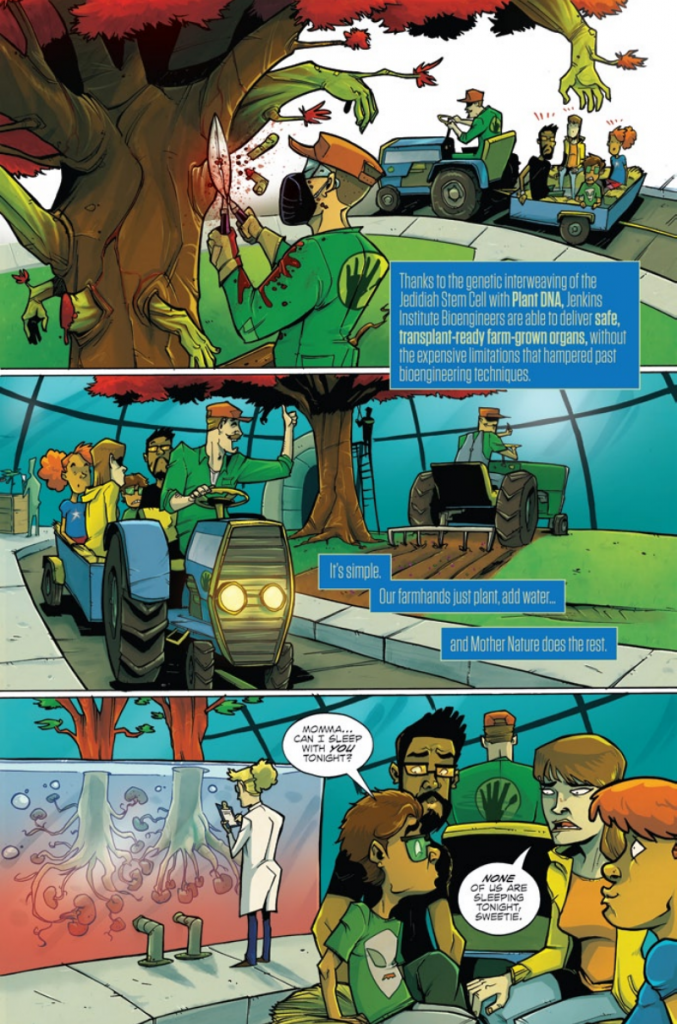 Another aspect of this book that I didn’t expect to be so prevalent was the humor. Now, it’s still a dark storyline with gruesome imagery, but it’s also hilarious. Guillory has an obvious talent for humor; I found myself laughing out loud several times. I don’t typically do that even with funny comics. The humor is understated, too; this isn’t a slapstick story by any means, but I found myself smiling at a few comments and some background images and signage. It’s a welcome addition to a comic that could have easily been a dark read.

And, it doesn’t skimp on the darker elements. This is a gruesome, and at times, uncomfortable (in the best way possible) read. There are terrible things that happen to some of the characters and while not a whole lot of it is explained in detail, it’s interesting and intriguing. There’s also the underpinnings of unrealized dread. The fact that the first issue of FARMHAND managed to pull that off while at the same time being a comical, family-driven story is commendable.

The artwork is also spectacular across the board. Guillory is in top form with characters that are stylized and cartoony but maintain a much-needed sense of realism to help keep the story grounded. The style also, thankfully, helps to off-set some of the more horrific scenes that might have been overly dark otherwise. Chopping a bloody arm off a tree and letting it crawl over to its new owner may seem like a gruesome scene, but with this art aesthetic, it’s charming. Disturbing, but charming.

Boys and girls — this is why we love comics. The first issue of FARMHAND is one of the most delightful surprises I’ve had in a long time. The horror fan in me loves the idea, the father/husband in me loves the family dynamic, and the kid in me loves the hilarity of it all. This is a fantastic first issue to what I hope is a long running series. Get this one as soon as you can!