“I’m an archaeologist. A scholar and preservationist of history. More than that, I am history.”

Hawkman isn’t exactly on DC’s A-list. Though the character has been on the Justice League, the Justice League of America, and most of DCs superhero teams he’s fallen by the wayside in recent  history. The character, and his partner Hawkgirl, were revived and interestingly-utilized during Scott Snyder’s Dark Nights: Metal event series. The Kendra Sanders in that story very much resembled Hawkgirl, but that large behemoth didn’t really depict Hawkman. Instead it was a corrupted version of the character who looked like one of the most horribly powerful beings on the planet. Don’t expect anything like that in Hawkman #1. Who knew that one of the best superheroes not being written right now was Hawkman? Well, apparently Robert Venditti.

The Hal Jordan and Green Lantern Corps writer decides to give Hawkman #1 an unusual approach. He makes the famous archaeologist that travels through time resemble another famous archaeologist. None other than Indiana Jones. With Hawkman #1 so closely resembling the Indiana Jones legacy, Venditti begins what can only be an entertaining series. From the very first page, Hawkman #1 becomes one of the most fun and entertaining debuts in the last couple months. There’s no difficult legacy to follow. Not yet at least. No, this is about an ancient magic ape attacking an archaeologist who happens to be Hawkman. Other than a few brief glimpses into the character’s history and life, that’s basically it. And it’s fantastic.

Robert Venditti is one of DC’s best writers, though he doesn’t work on that many titles. Hal Jordan and the Green Lantern Corps has been one of the most consistent comic series since DC’s Rebirth just two years ago. One thing is clear, Robert Venditti knows how to write a heroic protagonist. Whether it be X-O Manowar, Hal Jordan, or now Carter Hall every single hero fulfills their legacy in their own way. None of these Heroes copy each other, none of these stories resemble one another. He makes it a point to create a unique legacy for each of his stories, and that is already becoming clear in Hawkman #1. 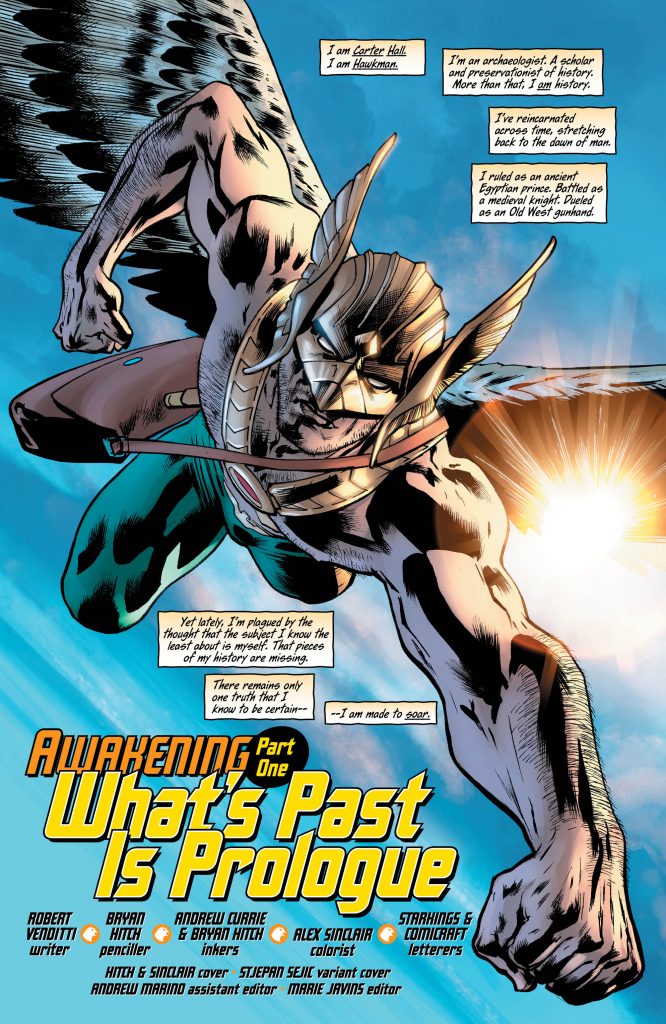 Like any good comic there is an apocalyptic cloud hanging over Carter Hall. Like many Heroes before him he can see a horrible future that he needs to be stopped. It’s not new. It’s fairly common in comics, which is arguably the only problem with this issue. That we’ve seen this all before. Still, mixing Indiana Jones with DC event comics isn’t a bad idea. In fact, it’s a great one. Hawkman #1 isn’t wholly original, but it is wholly entertaining.

“I can’t remember a life when I wasn’t enthralled by flight.”

Let’s get this out of the way, if you don’t like the art of Bryan Hitch, Hawkman #1 isn’t going to convince you to be a fan. While this is Bryan Hitch at his best, it can feature some of his problematic issues like odd facial expressions and anatomy. When glimpsing the action of Carter Hall soaring across the skies away from a glowing gorilla, or the horrible apocalypse that may someday reach Earth, that’s when the talent of Bryan Hitch becomes clear. 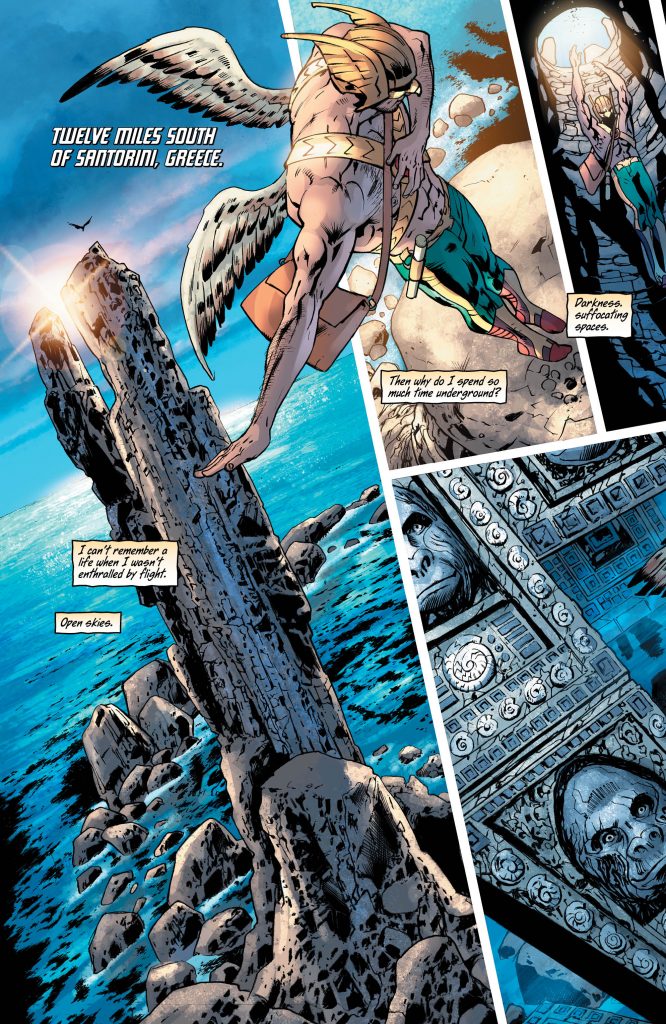 When he first joined the Justice League a couple years back, during the end of The New 52, his style was praised as epic, jokingly called widescreen. Yet that’s exactly right. The size, scope, and scale of every single aspect of his panels is a staggering testament to the detail that must take him so much time to complete. This is why everyone jokes about Bryan Hitch taking so long to complete deadlines, because he can create something so masterfully awesome. Andrew Currie joins him to help on inks, and Alex Sinclair on colors. Together, they make an incredible team worthy of Carter Hall, the Hawkman.

Sometimes there’s nothing wrong with a little old-fashioned, nostalgic piece of storytelling that takes you back to your childhood, a certain era, anywhere. A style. That’s what Robert Venditti brings to Hawkman #1. A series no DC fan knew they wanted. Sure, Carter Hall’s absence has been almost as noteworthy as Martian Manhunter. But did anyone really care that much? When he appeared in Dark Nights Metal, in a corrupted form, it was a wonderful surprise. But merely a story element, a twist. No one really cared that Carter Hall had made a return. Now, fans should care. Hawkman #1 is an unmissable action-packed series debut that delivers with every single page.

If you’re a fan of Indiana Jones in any way shape or form, buy this comic for the references alone. They are obvious, like every other time Indiana Jones is referenced in media history. But the true unique nature comes in funneling those awesome references through the idea of Hawkman. A superhero that has gone underutilized for years, but only recently given new life. Well, that life deserves much more exploration thanks to the writing of Robert Venditti and the Art of Bryan Hitch.