“Well. We’ve had our rough spots.”

Plastic Man is one of the most powerful superheroes ever created. He’s also a complete joke. That’s the state of the character before his recent revitalization under the watchful eye of Scott Snyder. Writers like Frank Miller found creative uses for the character in books like The Dark Knight Returns, but Snyder made him one of the most important parts of Dark Nights: Metal. An Egg with the power of a mysterious metal, and the ability to mold into any shape he imagines. He could be a horrifying madman, instead Eel O’Brien is a hilarious joke in a much-too-serious world. It has a few bumps in the road, but Plastic Man #1 is just the kind of fun that the comic world needs right now.

Gail Simone is as good as it gets. She can write funny, she can write drama, she can write anything. But gangster comedy/thrillers seem to be her forte. Enter Plastic Man #1. A wonderfully antiquated story with a an old style that just isn’t around anymore. None of the big publishers have the confidence to print projects like these anymore. Well, maybe those that aren’t written by the incredible Gail Simone and drawn by the insanely talented Adriana Melo.

“I call you to surrender to my Womanly Femaleness which is totally better than dudes!”

In a world of the growing bipartisan nature of the comic world, Gail Simone isn’t afraid of telling a few jokes. That’s the core of Plastic Man #1 and the key to why she’s the perfect writer for the gig. The story is a little typical. A gangster murder mystery that fans have read and seen over and over again over the years. But that’s alright. The point of the comic is the star of the show, Eel O’Brien. Gail knows just how to write this classic hero. She takes advantage of his powers and charisma in every way. 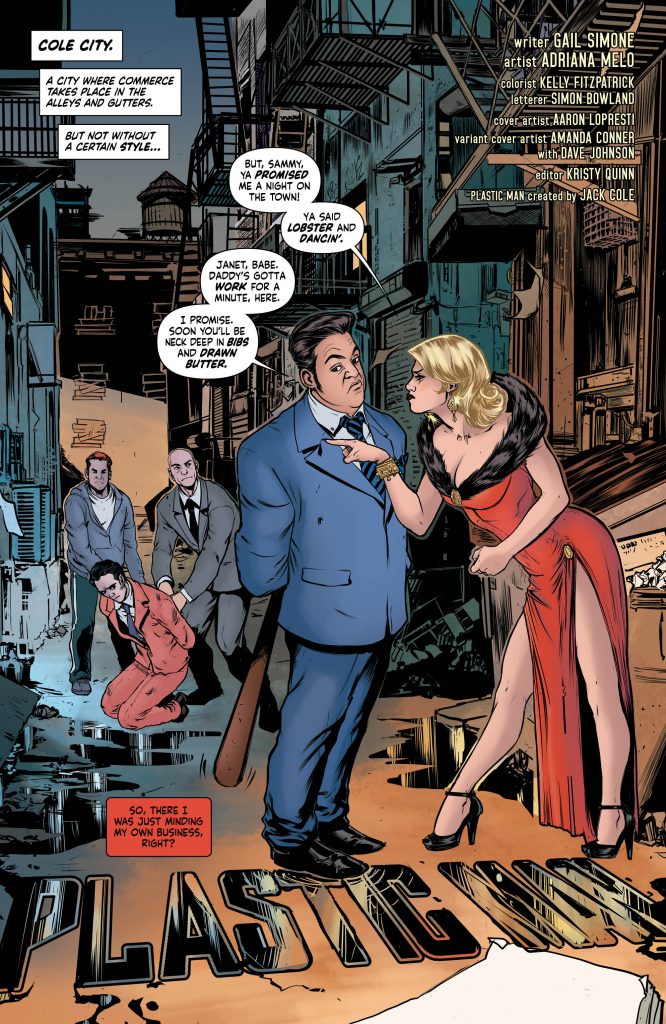 She’ll have you charmed by the character, the settings, literally every single detail. Plastic Man #1 is undeniable fun from the very first page. If Warner Bros. released this comic as a cartoon 50 years ago, every single one of us would have watched it as a kid. One of the few problems is just how closely the story resembles those old cartoons. Anyone paying attention will read the clues from a mile away, even if they aren’t there yet. The gangsters in too deep, the damsel playing it cool. By sticking so closely to the old patterns Gail Simone reminds DC readers of what they love, but the story might feel too familiar.

“Ama-zing Grace, How Great Thou Art!”

It’s got to be a hard job. Not only drawing for DC, but drawing a character that was most recently drawn by Greg Capullo and Ivan Reis. A high bar, indeed. Adriana Melo steps up to the plate and completely knocks it out of the park. Joining her on the colors is Kelly Fitzpatrick, who gives gives the perfect hues to the hilariously old world of Simone’s Plastic Man #1. The jokes are spot on, the action is spot on, every panel is a delight. If you spend some time looking into Melo’s personal work, you’ll find some of the most beautiful modern art anywhere online. 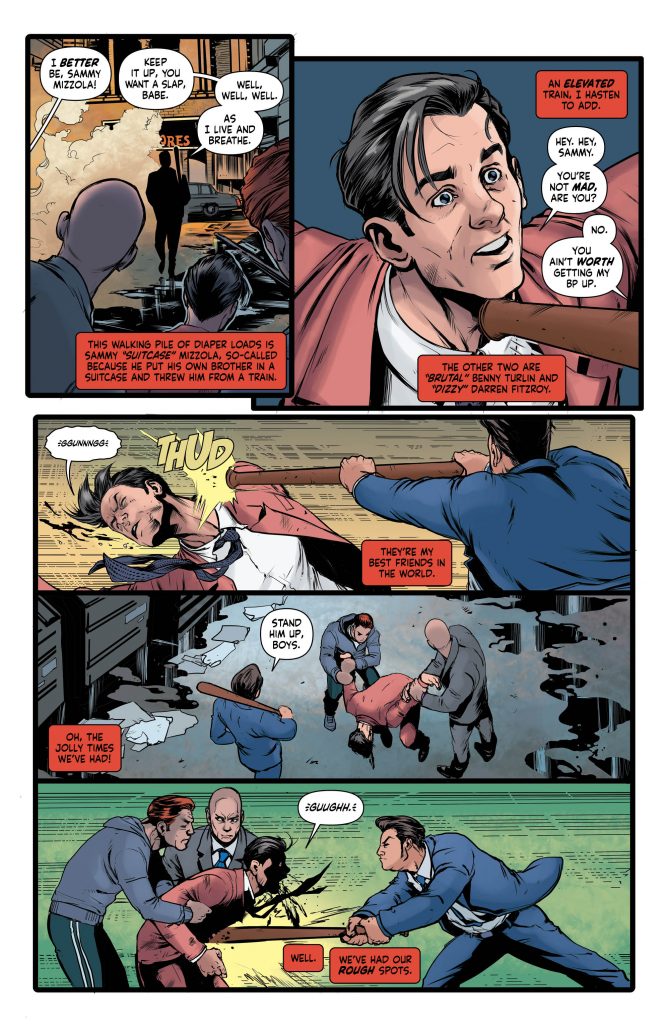 This is nothing compared to what she’s really capable of, and it’s still one of the most intricately illustrated works you’ll find on the shelves this week. Gail Simone is an absolute legend, but it looks like Fitzgerald and Melo will be joining her in the pantheon of DC greats. This is a book that looks as funny as it’s written, and that’s the best way to describe it. Melo and Simone collaborate to capture the gloriously ridiculous humor of the most malleable character in comics. Keep the comics coming!

Never “turn your brain off”! When any comic, movie, book or anything else tells you to do that take it as a bad sign. A warning that less care or thought was given to the work you’re about to witness. Plastic Man #1 isn’t some highbrow comic of great importance. It tells no tales of cosmic war or wonder. It’s just a simple gangster story set in an unknown time. It features vague and odd references to the rest of the DC Universe, the message isn’t to turn your brain off. It’s to sit back and enjoy. Plastic Man #1 doesn’t want to trouble you with convoluted plots or complex character arcs. This is a funny and comedic book that looks into the playable life of Eel O’Brien, the man who became Plastic Man.

After a few years stuck in DC obscurity, a few clever writers brought him back to the fold. Now, writer Gail Simone and artist Adriana Melo have given the character a series worthy of his recent renaissance. The sad truth is it’s a 6-issue limited series, probably necessary for a character as niche as Eel. Hopefully, the team will get another chance to revisit the character when this is all said and done. Because if Simone and Melo keep up the pace, fans are going to want more and more.