The Spider-Man: Homecoming sequel will cast three new actors to become Peter Parker’s classmates including a gender non-conforming student. These three new classmates will join Peter, Ned, and MJ. They will also join a new male lead believed to be Alistair Smythe.

That Hashtag Show reports on the description of these three potential new classmates:

An 18-22 year old ethnicity to play a gender non-conforming student.

An 18-26 year old actress of any ethnicity, preferably a character actor or comedienne.

An 18-25 year old male, to play a high school senior named “JASON” who is described as “charming and insanely likable.”

It’s anyone’s guess who these characters could actually be. It’s possible they might be Parker’s classmates from Midtown School of Science and Technology, but they also could be peers from other schools that will meet up with Peter, Ned, and MJ when they arrive in Europe.

Weiderman was a classmate of Peter’s who was also bullied. He would eventually get coated in liquid vibranium and became a villain.

Laurie Lynton crushes on Peter and eventually works with him at the Daily Bugle.

Clayton Cole used to admire Super-Man, but he would late go on to become the supervillain named Clash. In fact, after watching the Masked Marvel defeat Crusher Hogan, he was inspired to dive into technology and create his own outfit and become Clash. 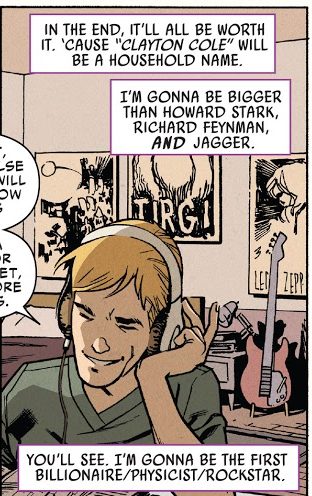