Star Wars author Chuck Wendig has been extremely busy on Twitter. First he decided to attack a number of Star Wars fans by calling them “white supremacists.” He would then threaten to sue fans over a parody t-shirt they made.

But his latest Twitter attack is the most bizarre. It’s over 30 Tweets long and begins with an attack on President Donald Trump. Most of the rant centers around Trump and the Republican Party. He uses the “f” word quite a bit as well.

Here’s just a taste of the beginning of his explosion:

The idea here is that somehow we’re turning off potential anti-Trump voters by — oh no! — saying salty words about the man.

Yeah, bad news. If that train can truly be derailed with so tiny a pebble, it wasn’t even gonna reach its destination, okay?

If they’re turned off by a little smidge of profanity, but *not* considerably more off-kilter thanks to the ACTUAL VULGARIAN in the White House who is basically using us, the flag, the Constitution as toilet paper — they were never gonna vote against him, not ever.

The right has crafted a sneaky narrative, one where they get to walk away with every atrocity in the book — while simultaneously holding full court press against the teeniest slight cast by someone on the left. “Yes, I killed a baby, but that Democrat was RUDE about it.”

But as Wendig’s explosion comes to a close, he switches his focus back to Star Wars fans. He once again describes a number of Star Wars fans as “shitty.” 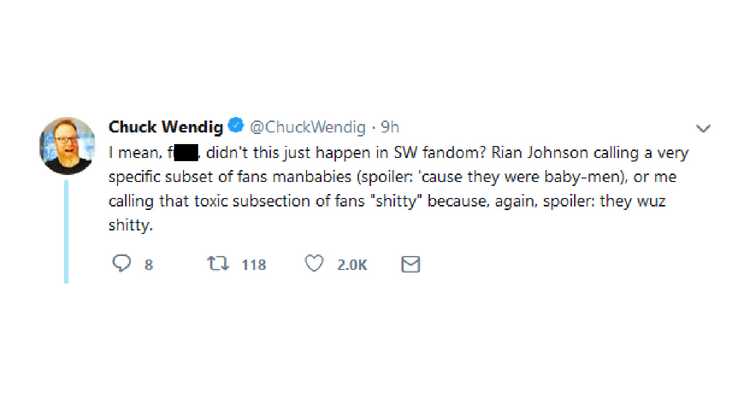 Then that group acts deeply, deeply offended, and they do their Dipshit Judo Reversals to make it, “WELL, THEY HATE FANS, AND THEY USE BAD LANGUAGE, AND THAT’S WHY WE MUST HARASS THEM ON TWITTER, BECAUSE THEY DESERVE IT, THEY’RE ASKING FOR IT, HOW DARE THEY, I HAVE THE VAPORS.” pic.twitter.com/NYZA3SV8xR

But he escalates it a little further by claiming that his critics come “from a poisoned, septic well-spring.” He claims that well spring is “toxic masculinity and abusive white privilege.” It’s highly ironic given Wendig is white and a man. 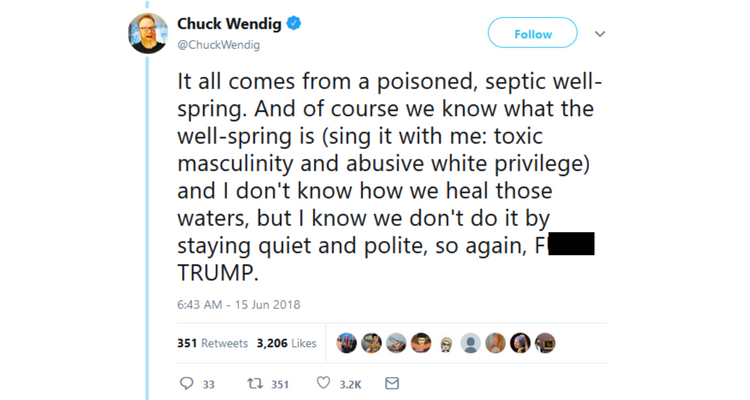 Wendig is definitely doubling down on his insults and attacks of Star Wars fans, but interestingly he appears to be now tying them to Republicans and Donald Trump. Could it be possible that Wendig’s attacks on Star Wars fans was politically motivated from the beginning? We just recently saw Tim Doyle confess to attacking former DC Comics artist Ethan Van Sciver because he supported Donald Trump and continues to support him. It’s definitely not out of the realm of possibility. He’s in for a surprise if he thinks all of his critics and Star Wars critics of The Last Jedi and Solo: A Star Wars Story are Donald Trump supporters.

Do you think Chuck Wendig continue his downward spiral and continue to insult Star Wars fans?