A Movie, There Isn’t

Yoda is one of the most iconic film characters ever. He’s a wise old sage who first appeared to be a mangy, weird swamp dweller in Empire Strikes Back. We would learn he’s one of the most powerful Jedi of all time. Yoda was also one of the few who survived Order 66 and the destruction of the Jedi Order ordered by Supreme Chancellor Palpatine. Thankfully, Yoda stayed on the planet of Dagobah to one day train the son of the man who destroyed the Jedi Temple. The character is 900 years old when he finally passes away. A long and storied life that many assumed Lucasfilm and Disney were itching to explore. Apparently that’s not the case.

Yoda was voiced by the famous Frank Oz on the big screen. But on shows like Star Wars: Clone Wars he’s voiced by the remarkably talented Tom Kane. At a recent All-Star Convention appearance, the voice actor dismissed the idea that Lucasfilm and Disney are working on a Yoda film.

It should be noted that if a Yoda movie gets made, Frank Oz would likely voice the character. That’s not to say that Kane wouldn’t be aware of the film, it’s just unlikely that he would depict Yoda unless Oz opts out.

This information was relayed by Aaron Goins who reported on Tom Kane’s appearance at All-Star Comic Con over the weekend.

Tom Kane seems to be somewhat in the know but very hesitant to share.. claims there are at least 9 Star Wars films in various stages of development, some individual character stories yet to be announced, but definitely not Yoda. #StarWars #AllStarComicCon

After his story got a little more attention, Goins elaborated on the “source.”

Since this tweet is getting way more attention than I expected I need to clarify something that I noticed some are reporting incorrectly. I did not interview or even talk to Tom Kane. My tweet is based on a comment he made while on a panel at the con https://t.co/pFYoaff7I7

So it’s important to note that Goins is sticking by his story. He’s just providing more details. The fact that Tom Kane was speaking to a Con audience instead of one person just adds more validity to the story. But can it really be true? Do Lucasfilm and Disney really not have a Yoda movie in the works?

Too Soon, It is

Not every Star Wars character with a personality is going to get their own film. While Yoda is one of the greatest, he’s also one of the few characters who’ve been in all three trilogies. Audiences have seen his story develop, watched as he’s fought battles, taught students, and lived a life of hiding. Would learning more about his past make the character better? Moreover, could literally any addition to Yoda’s story make the character any better? No.

Solo: A Star Wars Story did not make Han Solo a better character. The movie is having a hard time justifying its own existence at the box office. Do fans want to see Yoda suffer the same fate? 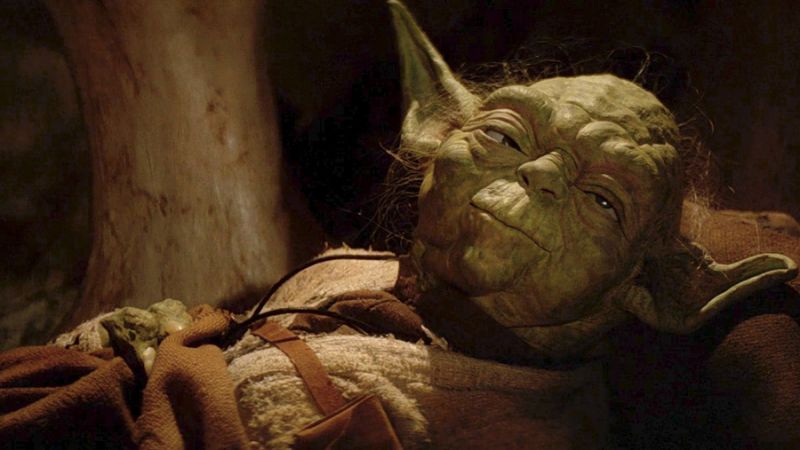 900 years is a long time to explore the Star Wars Universe. Watching Yoda become the Jedi he grows up to be could be interesting. Audiences have never really seen a Padawan fully and successfully trained on the big screen. Luke never finished his training, or did so alone. Obi-Wan was knighted by the end of The Phantom Menace and Anakin… well, let’s say that was the opposite of a proper apprenticeship. Watching Yoda become the first fully-trained Jedi, in live-action, could be fun. But the studio knows they need to wait for the right time. Just because Kane suggests a film isn’t being worked on now, doesn’t mean it won’t happen eventually.

If Kathleen Kennedy and Lucasfilm are going to keep making “A Star Wars Stories,” Yoda needs to be one of them.