It Takes a Village

To raise a child, even if that child grows up to be the Joker. The Joaquin Phoenix-led and Todd Phillips-directed Joker film could begin shooting as early as September. As new details emerge, so will the Joker’s mysterious origin. One of the most interesting developments on this film could be its cast. With Martin Scorsese producing, this could draw some serious talent. According to The Hashtag Show, that’s already happening.

First, they reveal brand new role descriptions that are sent out to casting directors and actors. Some of these characters could potentially be the Joker’s “family”.

Supporting Female (60-74) Caucasian. Lower class, very attractive in her younger days, still feels that way about herself. But recently her health has started failing, and she’s nearly bedridden in her Lower East Side apartment which she shares with her grown son who just moved back home. She’s obsessed with her former employer and can’t believe that this is what her life has come to, that she has ended up here, like this…

Supporting female (27-34) to play African American or to play Latina. Not beautiful, has a hardness to her, a single mother living on the Lower East Side, doing the best she can, trying to make ends meet; worn out by the grind of the city. She understands how the system is stacked against her and the people in her community, how unjust it all is for them. She’s just trying to catch a break..

It’s important to remember that the names aren’t important and are likely falsified to keep the story under wraps. Penny and Murray could very well by the Joker’s parents, with Sophie being his love-interest. But what about Murray…

The Original King of Comedy

It’s no secret that this Joker film is largely based on Martin Scorsese’s The King of Comedy. The film starred Robert De Niro as a failing comedian who decided a big crime was going to be his big break. Sound familiar? Todd Phillips is looking to bring his own spin on the same story with Joaquin Phoenix and The Joker. Along for that journey could be none other than the original King of Comedy, Robert De Niro. 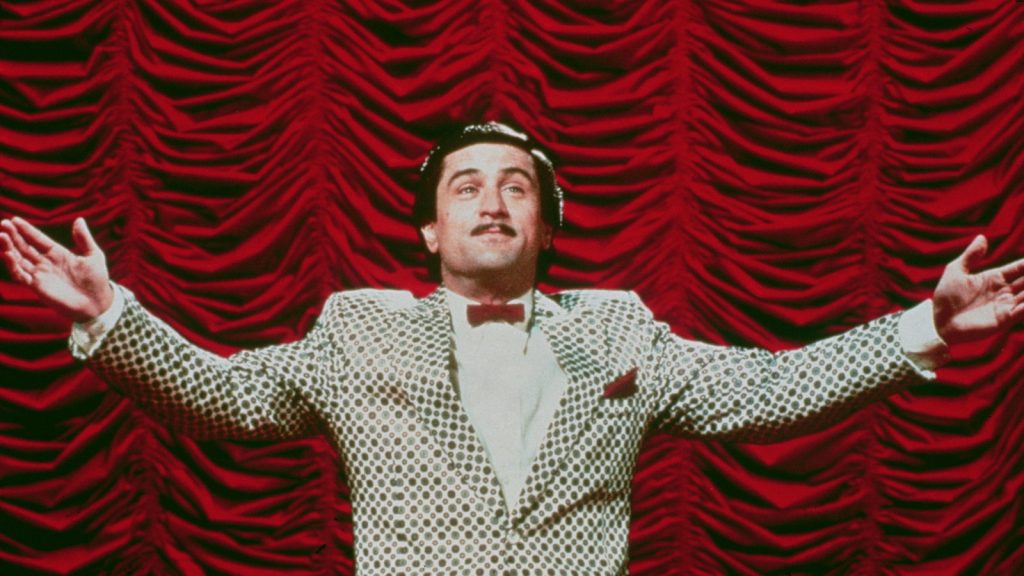 Robert De Niro in “The King of Comedy”

Heath Ledger’s Joker “hated” his Father, if you recall. The Father figure of one of the most villainous personalities ever forged must certainly be his own kind of monster. There could be any number of reasons that the role description was left blank, but it’s possible that the details are being kept so “close to the chest” that only the potential actors will know. If Robert De Niro doesn’t take the part, look for other big name actors to be courted. A project like this needs A-list celebrities to add some validity, not that Joaquin Phoenix and Martin Scorsese don’t already help.

Having a big name actor anchor the cast, and have a growing conflict with Phoenix, could be amazing on-screen. The kind of character work that goes into Academy Award-winning films, not superhero fanfare. But what other roles are going to fill the cast of the highly-anticipated film?

If you know about the original background of the Joker, you know he was familiar with the world of crime. Whether a small-time crook pulling robberies, or a hitman going by the name of “Red Hood,” his hands were dirty long before his Joker days. It looks like the first few roles could be his original henchman or partners.

Supporting Male (40-59) Caucasian. Thinks he’s the wisest and most knowledgeable person in any room he’s in, tries to present himself as a mentor to everybody, but is really just looking out for himself, burly.

Supporting Male (30-49) any ethnicity to play a dwarf; Randall’s best friend, he’s good-natured and a buddy to his colleagues at work, one of the only decent people in the whole movie.

Supporting Male (50-69) any ethnicity the old-school manager of hotel staff. He’s seen it all, and finds it difficult to give a shit about much of anything anymore

If the Joker’s going to have fun in his own film, it feels like there’s one thing missing…

It looks like the Joker will be joined by some local authorities.

Supporting Male (50-59) any ethnicity. Police Detective in a city on the brink; a by-the-book cop, worn down by all his years on the force. He doesn’t care about or take into consideration any of the societal or political ramifications of his cases.

Supporting Male (30-39) any ethnicity. A Police Detective and Garrity’s partner; he’s an asshole, who gets off by being in a position of authority. Being a cop is how he defines himself.

The unfortunate truth is that police officers don’t seem like the kind of characters to survive a film made about the Joker. They might not, but that doesn’t mean they don’t play a pivotal role in his previous life. Joaquin Phoenix won’t just be playing the Joker, he’ll be playing the man that becomes him. It could be these two characters that push the Joker over the edge, instead of Batman or mobsters like previous iterations. With actors like Joaquin Phoenix and Robert De Niro possibly joining the project, these other roles could also attract big names.

This new Joker film could open new doors in the superhero community and finally give them the recognition they truly deserve thanks to names like Todd Phillips, Joaquin Phoenix, and Martin Scorsese.