Let it be said that Tom King is not afraid to try new things. Bruce and Selina are soon-to-be wed. A joyous event for many heroes in the DC Universe. The Joker isn’t taking it well. Something about his greatest adversary finally getting the happiness he deserves just doesn’t seem to sit well. In the previous issue, the Joker lured Batman into a church filled with victims. Little did he know, he was going to become yet another. From a certain view, Batman #49 is an exercise for Joker, a way to fully come to terms with this horrifying event that will come too fast. Because it will come to pass. Fans probably thought that Tom King was building to an epic fight between bat and clown right before the big day. The truth is slightly different.

Batman #49 is more like a conversation between old peers, “working buddies” talking about the old days and reining in the new. As simple as it is, most readers probably forgot that in the long distant past Catwoman and Joker worked together. In the muddled and confusing history of the Rebirth era, there’s no saying what history they have, but their chemistry is obvious and endearing. This is quite possibly the most likable the Joker has ever been, because of a simple change in perspective. The last few pages are a little odd.

What is most likely a unique bookend to close out the story could also be construed as a plant for the next issue. The problem is the final page doesn’t raise tension like a cliffhanger, it’s just confusing. A difficult problem to describe without getting into spoilers. Regardless, it won’t take away the fun had in the previous pages. Tom King is another storyteller subverting expectations by way of unexpected stories, because Batman #49 is the Catwoman and Joker story no reader knew they wanted.

“Why does the Penguin have an umbrella? Is that a thing?”

Tom King has an interesting relationship with dialogue and plot. In some of his story arcs, the plot is unique and captivating while the dialogue is repetitive and redundant. In stories like The Best Man’s finale in Batman #49, there’s little plot to be found. The focus is entirely on precise, comedic, and witty dialogue. Every line feels carefully thought out, like any good characterization should. Most expected there to be some grand plan of Joker’s to destroy the upcoming nuptials, but he hasn’t always been the greatest planner.

No, his personality is more reliant on manipulation and destruction. Once again, his actual point during this arc is confusingly unclear. Two issues in and there’s no indication if the Joker’s actions will affect the wedding at all. 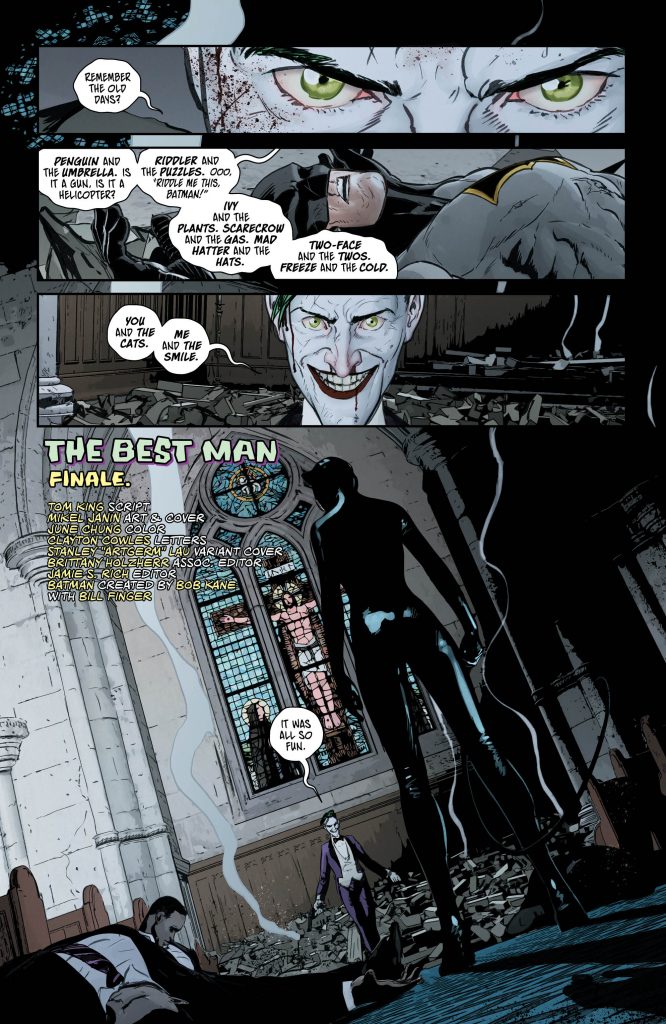 It’s the quiet moments that make Batman#49 powerful. Giving one super villain and one antihero the opportunity to discuss who is truly worthy of Batman’s love. It’s fun and exciting. The fantastic dialogue reads exactly like a picture perfect view of how this conversation should play out. The sly cat juxtaposed against the mad clown. The relationship between Catwoman and Joker has never been explored like this before. Though the ending takes a downturn, the journey’s worth the destination.

“Eh, y’know Harvey. He can still go both ways.”

Mikel Janin can capture emotion like few artists can. Only a few of the many talented illustrators who Tom King works with can actually express change over nine panels in one page. A structure that remains a continuous signature in King’s work. Janin may be the most skilled artist in this regard. The reader will watch the Joker’s face develop from curious fun to maddening horror in the matter of a few panels. That takes great skill. 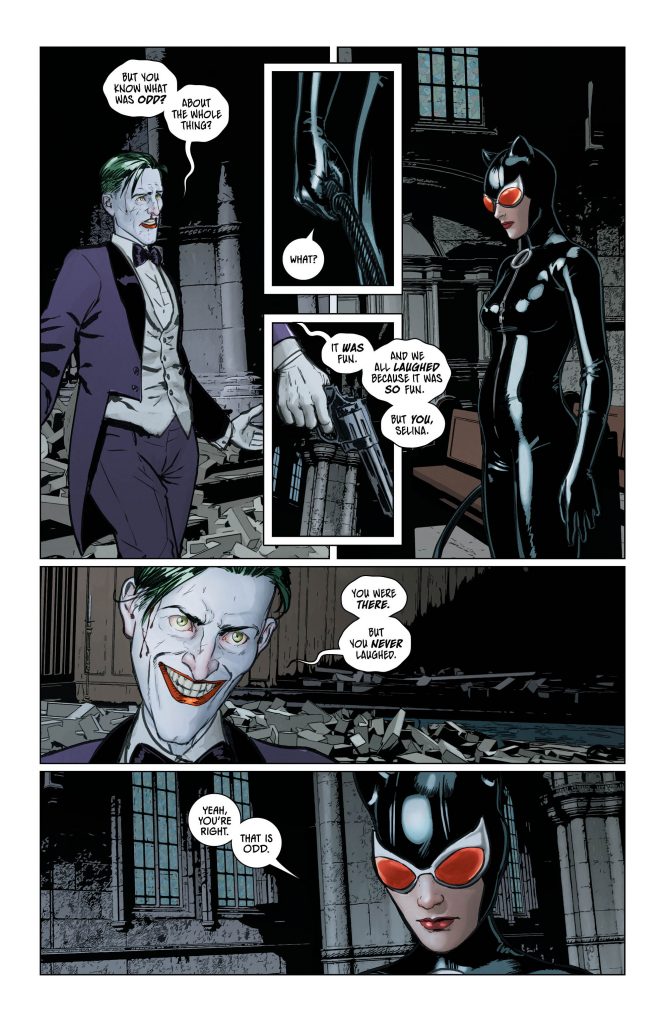 It’s not that the the Joker hasn’t been drawn by countless great artists. It’s about taking the character through that emotional journey. Giving the reader a look at a different side of any character, perhaps showing a chink in the armor by way of a broken smile. Janin’s Joker is surprisingly vulnerable. He bleeds, his expression cracks, he’s prone to frowning. Like the writer he collaborates with, Janin’s attention to detail is ensuring he’s making his mark on the Batman legacy. Colorist June Chung retains her title as one of the best in the business, by making the brooding shadows of Janin’s work come to life. Without a lot of settings or characters, Batman #49 remains a beautiful and colorful comic thanks to a talented art team.

In a way, Batman #49 settles the question of who would win in a fight: Catwoman or Joker. The answer is more about mind than body. Because at the end of the day, neither have super powers. They’re merely proficient in hand held weapons and the occasional gun. That’s basically how writer Tom King has his story play out. It’s not about a grand plan, it’s not about a horrifying new toxin. It’s about a conversation that needed to happen and some feelings that needed to be worked out. The chemistry between Catwoman and Joker is unthinkably entertaining. They are like former bickering colleagues that go at each other with wit and humor.

Just like her beau, Catwoman is not easily done in by the games and schemes of the gangster clown. Or is she? The final pages leave a few questions hanging in the air in a more confusing than captivating way. It’s genuinely unclear how this arc ends, but it seems the wedding is still on. Outside of this mild frustration, Batman #49 has some incredible dialogue in conversation that gets to the very core philosophies of every character contained within. It’s interesting, it’s unique, it’s Tom King.