IDW Publishing and DC Comics will team up for a Batman/The Maxx series. The series will be a five issue limited run and will be written by John Layman and Sam Kieth with art by Kieth. It will be the first new The Maxx series in over a decade according to IDW.

IDW and DC are describing the series as “the most surreal, quirky, and wonderful crossover of all time.”

The series will begin as a new doctor at Arkham Asylum begins conducting wild experiments into the human psyche. His newest patient is The Maxx and the experiments cause Gotham to begin to merge with The Maxx’s psychedelic mental landscape, known as the Outback. The lines between real and unreal begin to blur.

In order to save Gotham and all of reality, Batman must team up with The Maxx to travel through the dark and twisted minds of his greatest enemies. 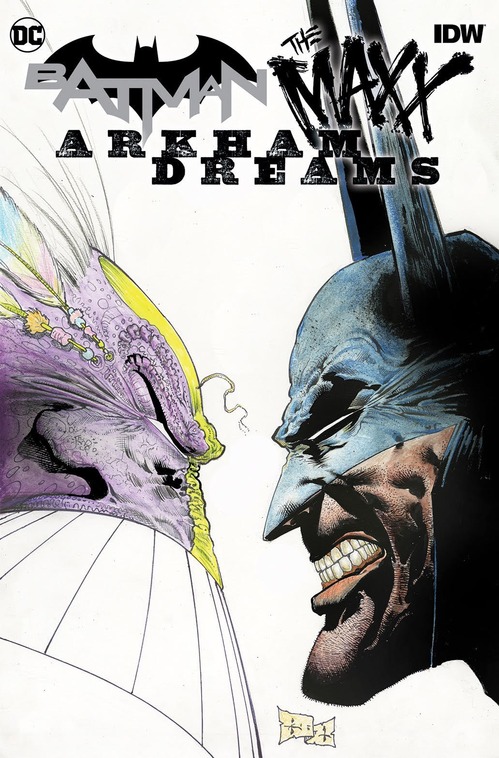 If you are unfamiliar with The Maxx, he was originally created by Kieth in 1993 in a series published by Image Comics. The series followed the titular hero in both the real world and the alternate reality known as the Outback. In the real world, he is just a “homeless man living in box.” However, in the Outback he is the protector of the Jungle Queen. The Jungle Queen is a social worker in the real world named Julie Winters who regularly bails the Maxx out of jail.

Keith spoke to Paste Magazine to express his excitement over the crossover, “Doing a Batman and Maxx crossover is like a family reunion with my favorite brother and our really cool cousin. You never want it to end…or at least I hope you won’t!”

The first issue will be available in September for $4.99.