We are drowning in reboots and reimaginings these days. Sometimes it works out alright, but more often than not these new takes on classic characters end up being forgettable at best and insufferable at worst, such as Dynamite’s own unfortunate reboot of Nancy Drew. Writers and creators tend to ruin what made these properties so engaging in the first place by adding unnecessary “updates” to bring them to our current (and let’s face it, “jaded”) audience. Dynamite Comics is taking a bit of a different angle on their new Charlie’s Angels comic run though. Instead of changing what makes the show a loved classic, the first issue reads as if it were ripped straight from the 70’s TV series that inspired it. The book, and we, are much better off for it! 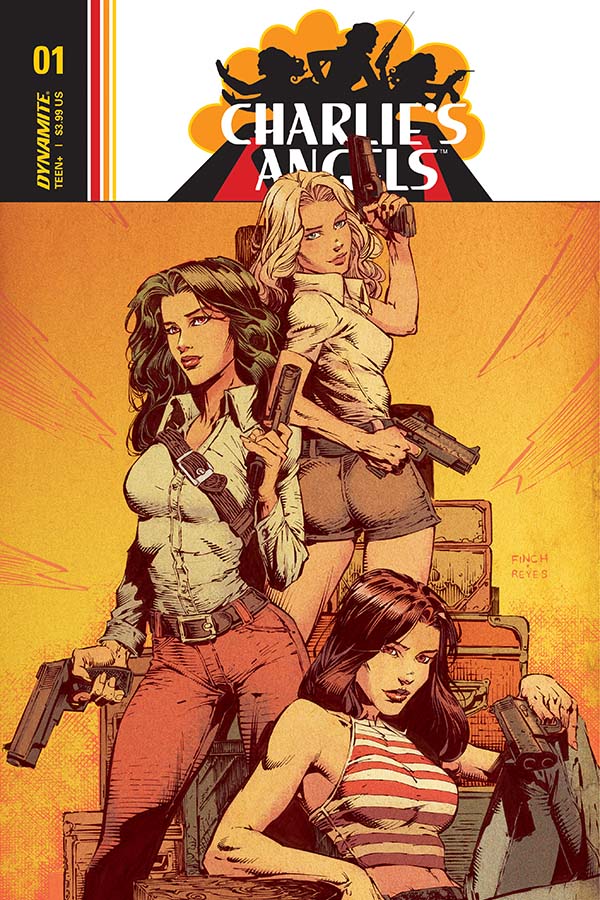 From the opening pages you can practically hear that groovy theme music start playing as we are introduced to the Angels. The three titular characters, Jill, Kelly, and Sabrina, are the original Angels from the series, so fans will feel right at home. The entire 70’s aesthetic is pulled off to near perfection. From clothes to attitude to vernacular, this first issue reads as if it could have been written straight from a lost script of the original series. Even coming from someone who only occasionally watched this show in reruns, I was happily transported back to an era that I never actually lived in. Equal credit goes to writer John Layman, artist Joe Eisma, and colorist Celeste Woods for creating that swinging and cheesy 70’s world.

Creating a fun world can only take a comic so far if the story isn’t any good, but luckily for us, Charlie’s Angels #1 is a great, fun read. The story itself is pretty standard crime/undercover cop fare, but it’s pulled off with such gleeful enthusiasm from everyone involved that it’s hard not to get sucked right into the story. Charlie sends the Angels (and Bosley, of course!) to a gentleman’s club to spy on some gun runners in an attempt to bring them down. Again, it doesn’t sound like an overly exciting concept, but the characterization, snappy dialogue, and a monkey causing trouble elevate what could have been a standard crime caper into an enthusiastic, retro good time!

That enthusiasm the characters are written with is probably what makes this book such a joy to read. These characters, specifically the Angels themselves, are filled with such energy and optimism that it’s impossible not to root for them, even if you’ve never even heard of Charlie’s Angels before. In a comic book climate where every powerful, butt-kicking woman seems to be more concerned with proving she’s better than everybody at everything, it’s refreshing to read a story with awesome, powerful women who just do what they do and genuinely seem to be enjoying themselves. And as a result, so do we. 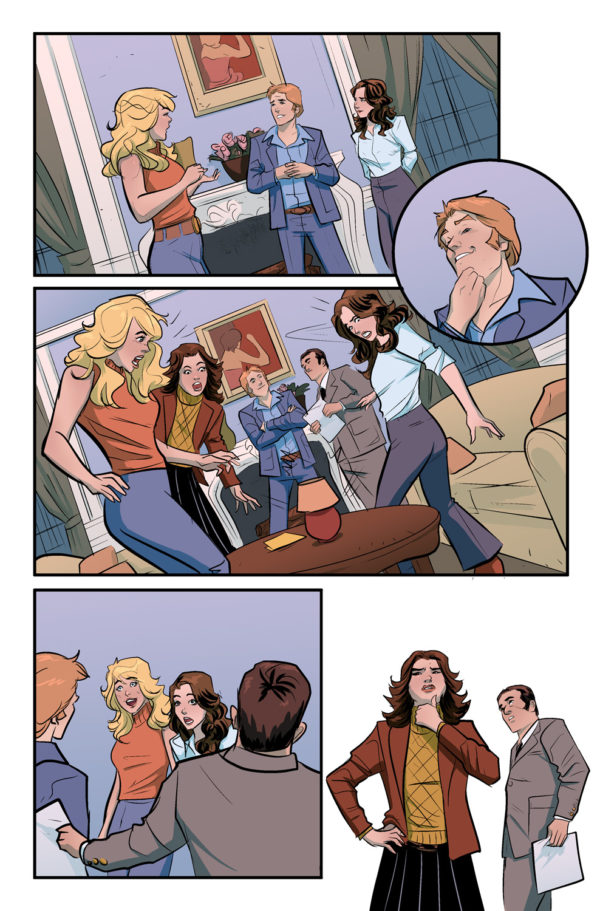 Just when things are wrapping up on the final page and the Angels celebrate another victory, we’re given a right turn involving two (hilarious) German villains. It’s pure 70’s TV fun and there’s even a panel near the end that showcases all the characters simultaneously laughing at some sight gag, just like we’ve seen at the end of countless TV shows of the past. It’s pitch-perfect, self-aware stuff like this that make this book so great.

In case you couldn’t tell, I love this first issue of Charlie’s Angels. There’s no pretense here, no agenda pushing, no political slant being shoved onto us; just fun, escapist entertainment. The stuff comic books were built on. This first issue is everything I didn’t even realize I wanted and now I can’t wait to see what Layman, Eisma, and Celeste have for us next. Now…. Where did I put my bellbottoms?