James Wan has a film coming out in a few months. Maybe you’ve heard of it? It stars Jason Momoa, Amber Heard, Willem Dafoe, Patrick Wilson, Yahya Abdul-Mateen III, Nicole Kidman, Dolph Lundgren and more. The film goes by the name of Aquaman. DC’s track record may have faltered, but Wan is looking to change that. The entire team is exciting. While fans have yet to get more than a few pictures of this new world, soon that’s going to change. When showing off his brand new Funko Pop to his Instagram fans, director James Wan showed off a particularly revealing image. A fight scene from Aquaman!

First of all, calm yourself. Yes, it’s ridiculously awesome. Let’s take a second to dissect everything in the image. A dark editing bay, typical of any Hollywood film. A “Property of Warner Bros.” tag above the image, a hint that this was no accident. Having that action scene in the background was obviously intentional. Wan knew he was giving fans a look at some Aqua-action. Now, onto that fight scene itself… 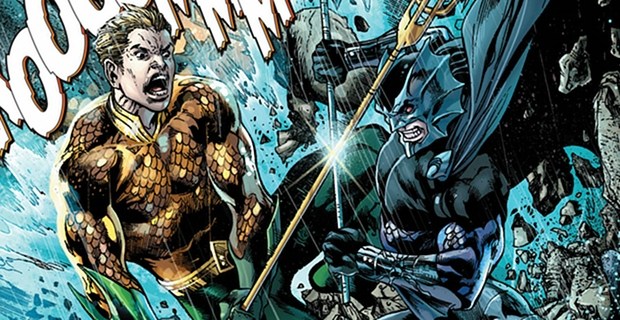 Ocean Master Orm will be the main villain of this film. He also happens to be Arthur’s half brother, and another contender for the throne. An exciting tale not dissimilar to a Shakespearean play. Orm has a deep hatred for Arthur that leads to many a conflict. Eventually building to open war with the surface world. That sounds like an interesting angle to approach in the DC Universe, but that takes time. First, it looks like DC is going to set-up the conflict between Orm and Arthur. Could James Wan be teasing the first battle between Orm and Arthur?

There are no other soldiers fighting in the background, so this is no battlefield. The setting looks like a challenge between two foes, not unlike the “challenge” scenes in Black Panther. That doesn’t necessarily mean either of those characters are Arthur or Orm. But the two figures are distinct. There’s a clear golden/bronze coloring to the character on the left compared to the silver on the right. It also looks like the character on the left has large shoulder pauldrons, which reflects the new Aquaman costume that was recently revealed.

This could be a look at the first fight between Orm and Aquaman for the throne. Or it could be a flashback to an Atlantis of times past, meant to show audiences how ancient Atlanteans used to decide their new King. Unless James Wan decides to reveal more images, fans will have to wait until the first trailer to get a better look at the war between Ocean Master Orm and Aquaman.