“We missed you, Damien. Welcome home.”

Damien Wayne is back with the Teen Titans. After helping to save, or damage, the Universe in Justice League: No Justice he rejoins his teenage forces here on planet Earth in Teen Titans Special #1. An anthology issue that has more fun than you’d expect. Writer Adam Glass has never been too serious. Especially with his work on Suicide Squad, Glass has always been great at naturally throwing humor into an action comic. Helping to make him a great fit for Teen Titans. Though each of these stories are meant to be small or “seemingly” insignificant, it’s anything but. Glass utilizes every page to make great use of his characters.

The stories don’t mesh as easily as they should. The connections to the familial roots is appreciated, but this could be a story told with almost any three different heroes. They didn’t need to be in a team to mirror each other. One of the pleasures of the current series has been watching Damien grow into a leader. Unfortunately, his nostalgic memories of his Mother seems to be against his character, at first. But Glass pulls the story together by the end. Cleverly using Damien’s back story create some interesting details in Teen Titans Special #1. Unfortunately, the Titans should have gotten together for the issue. But it’s still a fun story in their overall journey.

The final page of Teen Titans Special #1 alludes to the future of the team in an exciting way. Sadly, it’s the only page the teams gets together for in the issue. Robin, Red Arrow and Kid Flash are each the star of their own brief story. In a way, every one of them is having an identity crisis. A fight with a form of themselves having issues with their past. Adam Glass’s writing uses each character’s history, both literal and fictional, to great effects. While Damien’s appreciation and fondness for his Mother’s soup is a little off-putting, the story is occasionally heartwarming even if a detail or two seem to clash with the current version of the character. 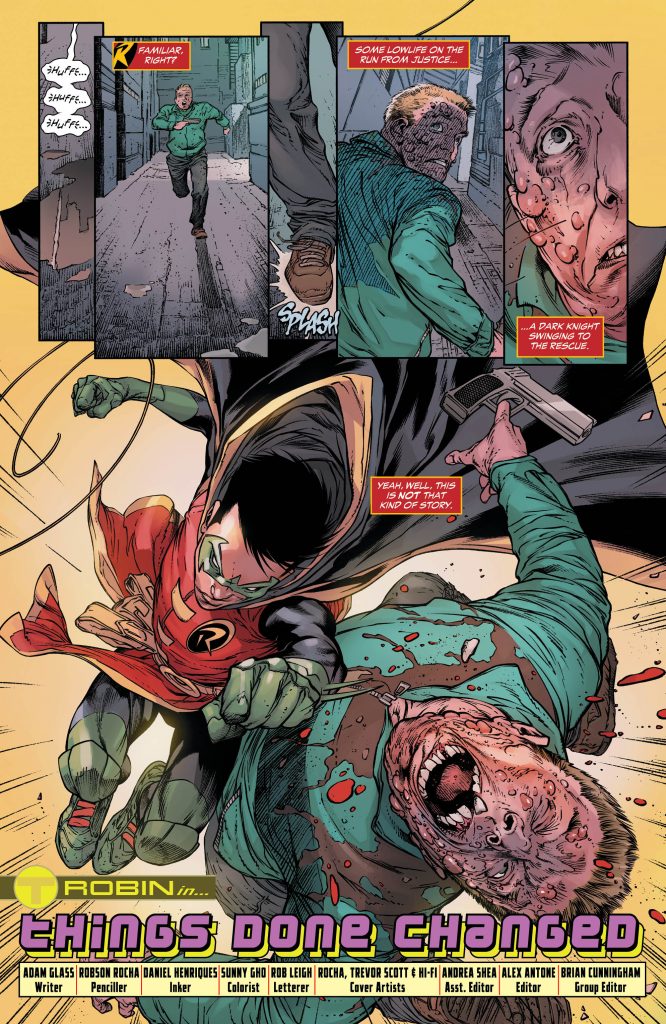 Damien’s a lovable grump, but to openly admit that Gotham isn’t his home? That seems out of character for the boy that Grant Morrison grew from scratch. Minor details aside, this still feels like Damien. It feels like Red Arrow, and it feels like Kid Flash. Wally’s story in particular has some fun when he sits down with…the other Wally West. An awkwardly fun encounter that doesn’t add any weight or tension, but makes for a great issue of a fun comic.

“A closer look proved me right.”

Robson Rocha illustrates all 38 pages of the hefty Teen Titans Special #1, and boy must his arms be tired. The level of detail on every page is downright impressive. With the talented Daniel Henriques providing inks, the work becomes even more admirable. There are no cut corners or simplified settings or background in this story. While a few of the panels and characters are a little off, most every other detail is a jaw-dropping reminder of Robson Rocha’s talent. 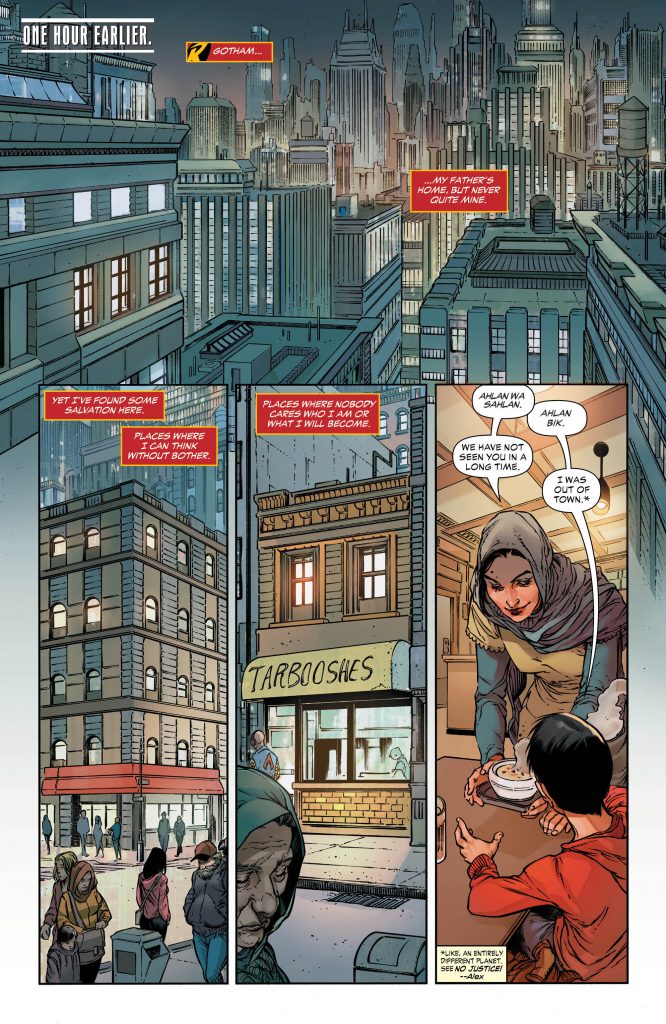 The panels themselves are worthy of praise. As characters explode from the panel’s edges and frames to jump off the very page, the reader will look on in wonder. In a cinematic sense, this is what you would want a Teen Titans film to look like. Sleek, well-framed, and perfectly capturing the expressions and emotions needed for every individual moment. The colors of Sunny Gho take a page out of Tomeo Morey’s own book with the insanely inventive use of shading. Particularly in Red Arrow’s story. Making each page a delightful gift of eye-catching art.

Robin dealing out violent justice; Red Arrow displaying her expertise. Wally West arguing over the art of “speedsting.” What more could you want in a Teen Titans comic? Well, you’d probably want the team to be together, for one thing. Writer Adam Glass creates an entertaining anthology issue with Teen Titans Special #1. In the special, each of those three heroes goes on their own adventures. Stories that delve into the character’s past and dig up part of their history. With Robin, it’s an interesting story that goes against the current version of the character. With Emiko, her Mother comes back to haunt her in a shock and heart-stopping chapter in her life.

When it comes to Wally West, it was a competitive conversation between two versions of the same person. Interesting looks at the current state of the DC Universe as well as the Teen Titans. The art of Robson Rocha, inker Daniel Henriques and colorist Sunny Gho is filled to the brim with extensive detail. While there’s an occasionally awkward panel or two, it doesn’t take away from the rich and alluring detail on every other panel and page. Together, the art team easily capture Adam Glass’s humorous and emotional stories. It’s time for the full Teen Titans team to get together again, but Teen Titans Special #1 was a fun and entertaining break for the characters.