I didn’t know what to think when I first started reading Image Comics’ new graphic novel, Son of Hitler. From the title, and even the cover, I assumed that I was in store for some sharp, political satire. Perhaps an author’s modern day political opinions propagated against the backdrop of World War II. Or maybe even a Nazi themed update of the cinematic classic, Son of Godzilla. It turned out to be none of those things, however, and even though the end product subverted all of my preconceived notions, it did so in a most positive way.

First things first: Son of Hitler plays everything completely straight. There’s no winking at the audience here and nothing satirical going on even in the slightest, which is a rarity in modern stories that revolve around crazy plots to kill Hitler. This is a realistic, alternate history tale that is grounded in actual what-could-have-beens and carries with it a consistently somber, and even sometimes downright sad, tone. 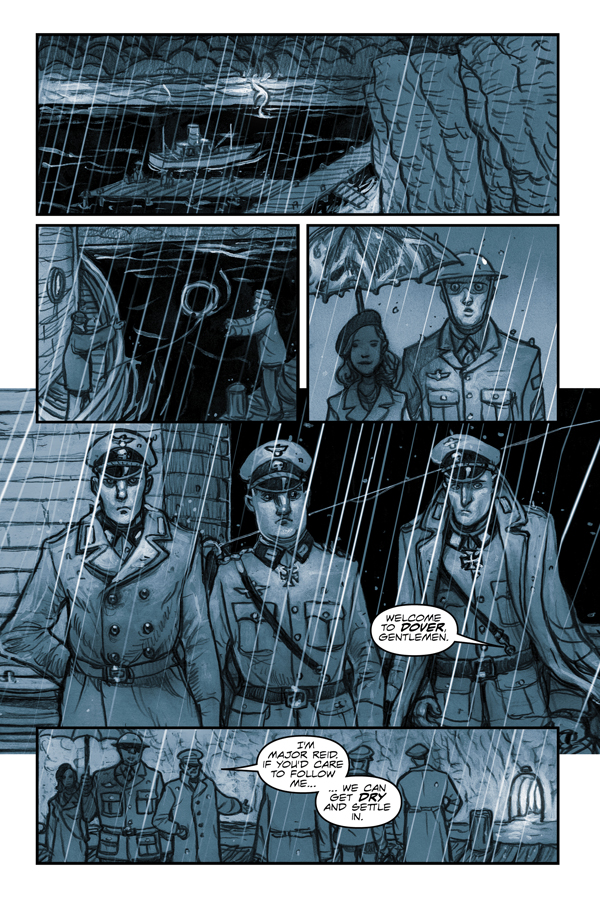 The story revolves around British SOE agent, Cora Brown, and her unrelenting desire to see Adolf Hitler killed and an end brought to the war. Her tenacity towards seeing this goal fulfilled finds her making deals with defecting Nazi officers for freedom in exchange for information regarding the whereabouts of Hitler’s long rumored son. Brown sees him as the best opportunity to sneak past enemy lines and put an end to the Feuer. She’s directed to an unassuming bakery assistant in France name Pierre. Pierre is, for much of the story, the heart of tale. He is a completely sympathetic character and the more backstory we get of him, the sorrier we feel for him. Like most people who hear that he is Hitler’s son, Pierre is resistant to the truth, but by the time he accepts it, he is chomping at the bit to get his hands on the dictator.

It really is the journey we take with Pierre that give this story the emotional weight to carry it through. This is a man who has been through the wringer. His relationship with his mother, his obvious absent father syndrome, and his willingness to do whatever it takes to make life livable for his family give him that classic underdog schtick that people just love rooting for. Even as an adult though, Pierre is not a well-adjusted person. His less than ideal upbringing has imbued in him an almost uncontrollable rage and a near superhuman ability to kill. In the eyes of Cora, and the reader, it makes him the perfect candidate to eliminate Hitler. 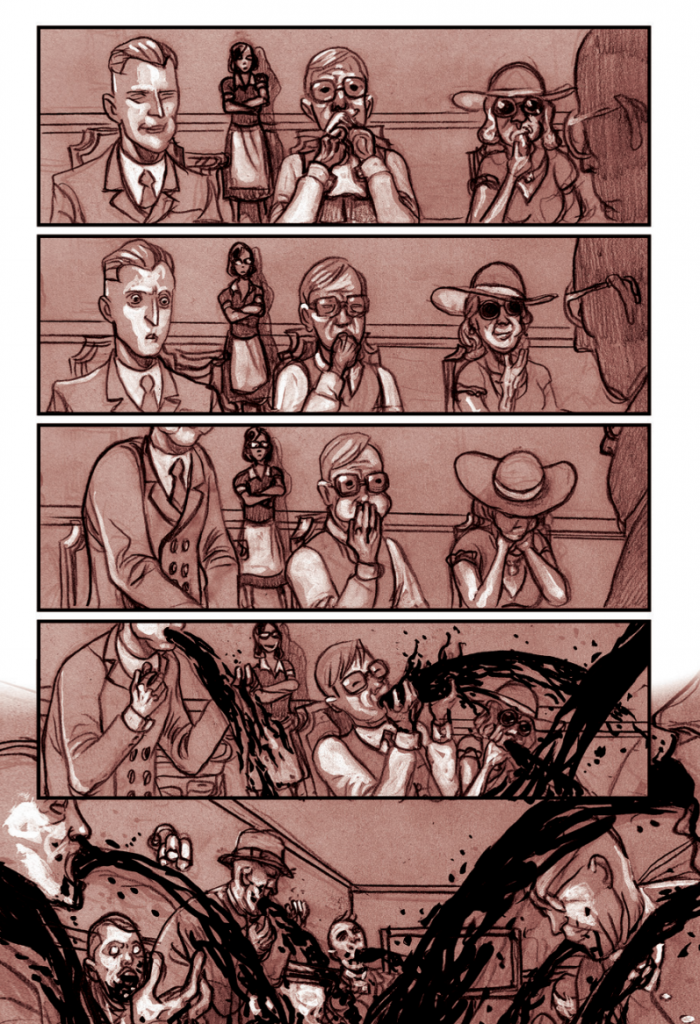 Writers Anthony Del Col and Geoff Moore have crafted a beautiful, and heart-breaking story with Son of Hitler. Besides the aforementioned Pierre and Cora, the book is filled with relatable and well-written characters that help to bring this somber tale to life. Both sides of the conflict are full of interesting, sympathetic, and in some cases, despicably terrifying characters. With a story that could have easily coasted by on its over-the-top premise, it remains an intimate, character driven spy story which makes the twists and turns the book takes all the more impactful.

To that end, Son of Hitler pulls no punches when it comes to shocking twists and violence. There were some definite jaw-dropping moments that I did not see coming and much of it was hard to look at. Nothing and nobody is safe in this world and Del Col and Moore do an excellent job of keeping the readers on their toes, never knowing what to expect. I was consistently surprised and a little upset at some of the developments, but the book earns its shocks and nothing feels forced or gratuitous. It’s a testament to the horrors of war and the lengths even well-meaning people will go to to see their agendas fulfilled. 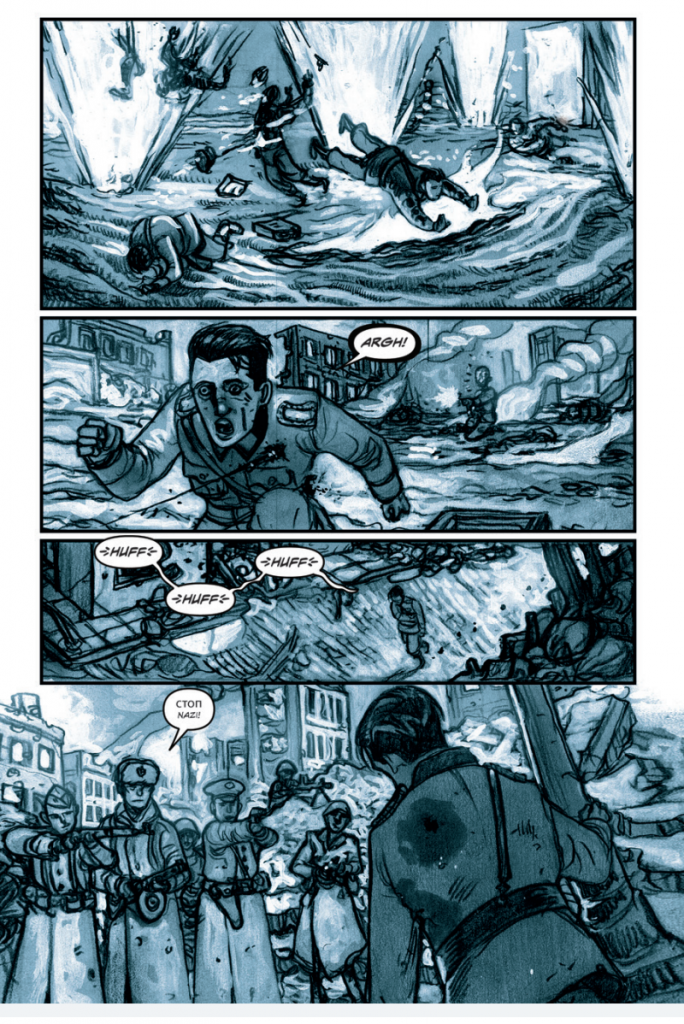 The artwork from Jeff McComsey is not going to appeal to everyone, but I found it incredibly appealing. The entire aesthetic is reminiscent of an artist’s sketchbook. Some of the lines are uneven, the shading isn’t perfect, and some of the character models aren’t always consistent, but for some reason it works perfectly. It certainly is not an art style that would work well with every book out there, but the almost whimsical style seems to offset and in a way, compliment the dark storyline. The only hit the art style takes, in my mind, is that the entire color pallet consists of only three or four colors. I understand the artistic choice made here for that vintage, monochromatic look, but it does keep much of the book looking a little too same-y and the palette may end up boring some people. It’s certainly not anywhere near to a deal-breaker, but it is worth noting.

Son of Hitler is nothing like what I was expecting. Honestly, I don’t know what I was expecting, but I know it wasn’t this. Despite that, I was pleasantly surprised as I found it to be a character-driven thriller that kept me constantly guessing what was going to happen next. On top of that, it’s an emotional gut-punch of a book that forces you to care about characters, even when you cannot condone their actions. It takes you down some dark alleys and consistently surprises you with some of the turns that it takes, but the ride never ceases to be engaging and compelling.

Plus, it never gets old watching Hitler bite it.