“They’re all detectives; they think they know something deep.”

The long-awaited Wedding issue is here! Batman #50 has finally arrived to hit comic shelves. What could have been a simple event comic ends up as an anthology dedicated to a courtship. The long-gestating relationship between the Cat and the Bat. Whatever the events of this issue spells out for their immediate future, Batman and Catwoman will be an item for the rest of time. Long after Tom King and Mikel Janin are making Batman comics.

However, in that change, this issue becomes uniquely strange. Lacking a cohesive narrative, there’s only a few bits of actual story in this issue. It’s an interesting glimpse into comic book history, but as a piece of comic book storytelling it falls a little short. Several artists give their take on what it means for Catwoman and Batman to occupy the same page. Some are amazing and inspired, some are downright difficult to look at. Batman #50 tries to hit the emotional heights of a comic like Action Comics #1000 without any of the work and preparation. That comic clearly took months and months of work of dedicated artists. Aside from the main story illustrated by Janin, the rest feels like a bit of a let down.

The circumstances of the event are not a factor in this review. Only in its execution. As everyone expected, something strange was going on from the very first pages. But Batman #50 is absolutely about the love between its titular character and Selina Kyle, the Catwoman. It’s just more of a historical statement than an immediate one.

“Then you surprise them. Maybe kick them, maybe steal from them.”

Writer Tom King is known for a unique structure. Every single one of his comics alter timelines, manage weird perspectives, and try to cast spells on the reader. Batman #50 does the very same. After reading the comic, you’ll find yourself reading again. It could be out of awe for the quality of the comic, it could be out of disbelief for what you just read, but the reread serves as a lesson in storytelling. 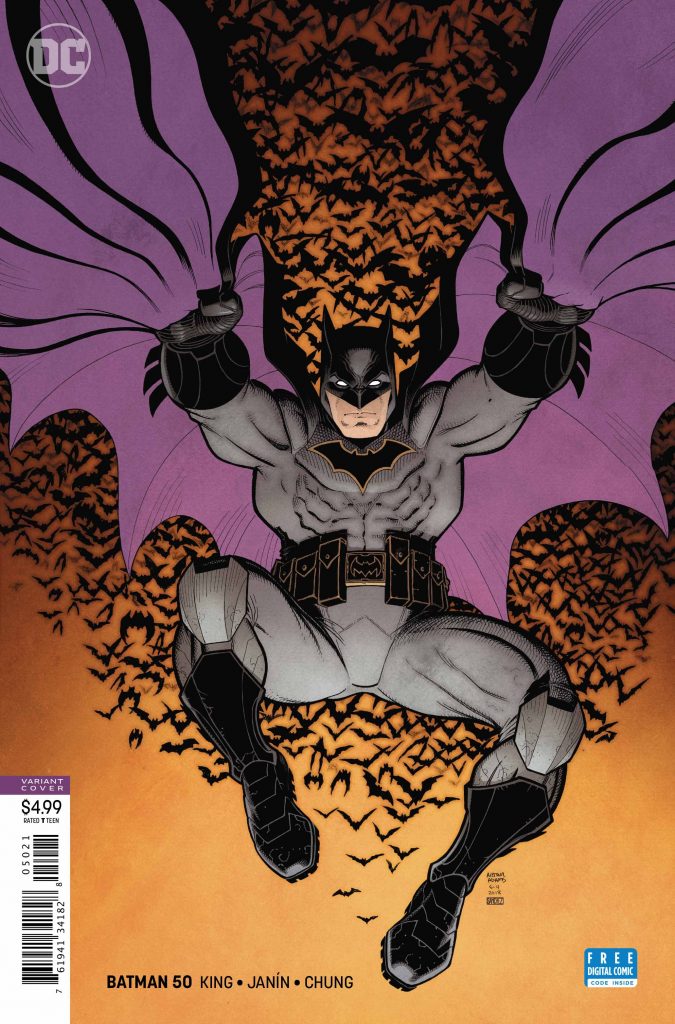 In the very same issue that solidifies their relationship until the end of time, Tom King spends most of it trying to convince Batman and Catwoman they aren’t right for one another. Through other vessels and people, the characters learn of the other’s faults. Of why they can’t be happy, of why they can’t be a hero. The truth of the matter is that’s just another spell of King’s. A few seeds planted for the stories to come. But does it leave enough for Batman #50 to be a worthwhile story on its own? Just barely.

The anthology pages are nice. With Catwoman and Batman each writing a personalized note to one another. Another testament to Tom King’s writing, every line of dialogue feels on-point. It feels like the direct and vulnerable thoughts of Bruce Wayne and Selina Kyle that were only meant for one another. Tom King’s talent with dialogue and writing is undeniable, a modern master of tugging at heartstrings. If only the issue spent more pages on scenes and character exchanges rather than narrative voice overs and random artist contributions.

Mikel Janin’s work in Batman #50 is as consistent as ever. His talent is vibrant and energetic, his designs are crisp and unique. June Chung’s colors are as glorious as ever. Matching the somewhat happy and lighthearted demeanor of the entire issue.

The only problems come in the anthology format to the art. Instead of a more linear story. Most of the pages are other artist renditions or takes on the Batman and Catwoman relationship. They’re interesting as alternate covers, but they feel more like filler with the actual comic pages. The narrative is structured around two long letters that Batman and Catwoman have written to one another. As they are read “aloud,” the words pass over the work of famous artists like Neal Adams, Clay Mann, Frank Miller, Jim Lee and more. 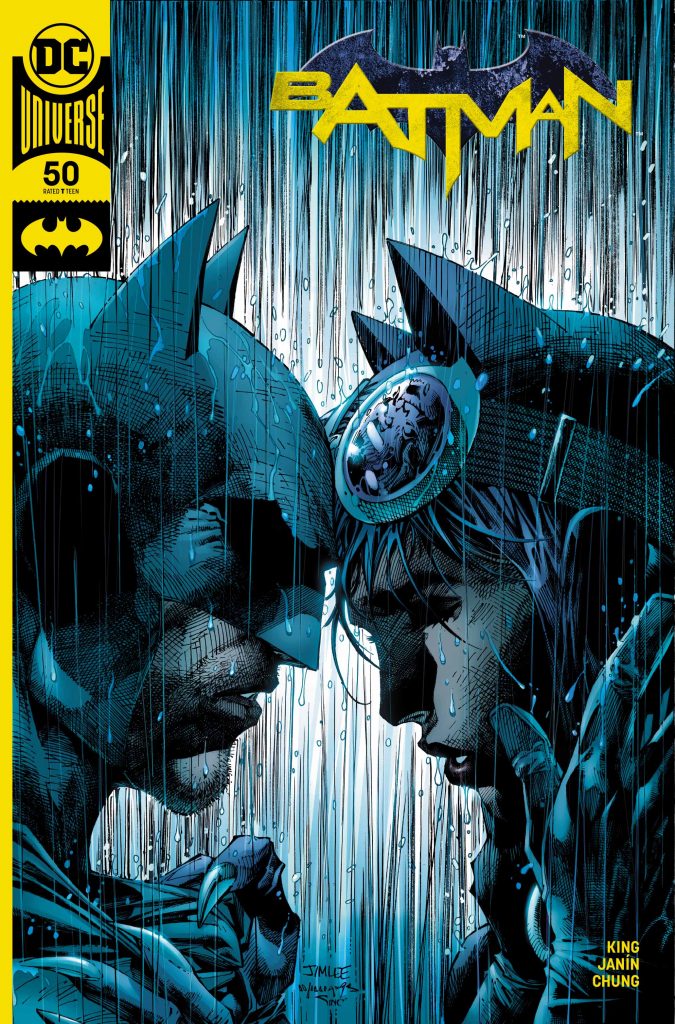 Most every page is wonderful to look at. Either a great new piece by a working artist or a sometimes haunting reminder of the styles of the past. Including multiple artist stories in a comic like Action Comics #1000 made it feel like a big, bombastic and epic issue. Batman #50 certainly has its emotional moments, but for the most part feels like text over alternate covers.

Tom King and Mikel Janin have worked together for a few years now. Taking Dick Grayson and eventually Batman on weird and mysterious tales that are incredibly engaging and inventive. When Batman #50 was hailed as the Wedding issue, no one expected a normal event comic. There’s very few pages dedicated to any events or scenes within the comic. Most of the time is spent listening to Catwoman and Batman describe one another.

It’s an introspective look at their own minds. A vulnerable hero and his overconfident femme fatale. In the very same sentences in which Tom King speaks of their love, he signals its inevitable demise. A truth that there are no absolute constants in comics.

Yet where Batman #50 falls a bit short is in execution, not in consequences. The reader would be much more engaged with a straightforward story with some artist changes as opposed to lengthy text and many single-artist pages. Not every single in DC History needs to be an overview of the events that led up to this event. Catwoman and Batman may work together as a couple for now, but exploring their past only serves to make the reader feel more disjointed with their present. The actual plot and story contained in Batman #50 has all the emotional weight needed to keep audiences on edge, if only there was more of it.